Enacting populism in its mediæscape 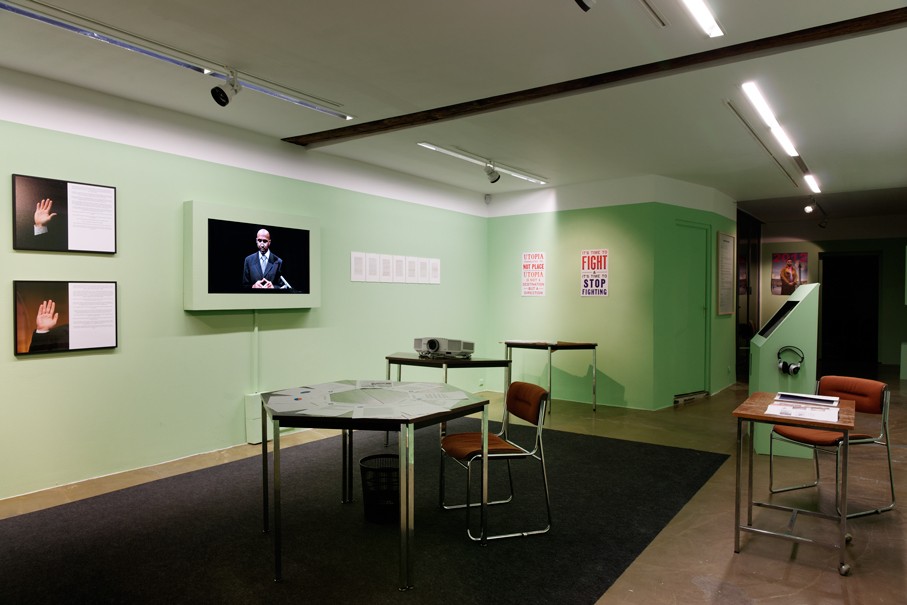 Enacting Populism is an on-going project on the possible relationships between art practices and the populist mediascape that connotes the current political zeitgeist of Europe. The project ‘s research phase started at the end of 2010 in Antwerp. Then it evolved as an artist residency (AIR Antwerpen) followed by the organization of an artist panel discussion (Extra City, Antwerp). At Kadist Art Foundation it will develop into an exhibition that will take place during the last two months of the presidential elections campaign in France. The space here is interpreted as a sui generis political bureau, immersing the exhibition in an ambivalent environment where the works can be seen as elements belonging to a political party office where a campaign is being prepared.

The show is focusing on the European populism that has heavily influenced the public imagery on politics for the last twenty years. Its leaders and agitators understood at an early stage the shift that occurred both in portraying the figure of the politician and in the role of the political discourse in the mediascape. In fact, when political ideologies ceased to give shape to the political agendas, with the end of the Cold War, the Western parties started to progressively mirror this ending with the flattening of their positions in the public debate, starting to respond only to a general capitalism discourse about a global market that needed to find its way. From that point the political action softened the natural antagonism of democracy, thus creating a lack of opposite and distinct political projects. This situation left space for a popular frustration to arise and consequently demagogues articulated it. Therefore those who understood how the space of politics worked slowly moved from being representative to openly playing with its representation in the media.

Ernesto Laclau was one of the first to acknowledge to populism a dimension inherent to any democratic regime, looking at it through a historical perspective and not just as a right wing party phenomenon. As he states,« democratic politics requires the construction of a ‘people’ on the basis of one or more empty signifiers as well as an antagonism between ‘us’ and ‘them’ « – states Laclau.

In order to create alternative, cheap and fictional feelings of belonging, or rather in order to ‘construct’ that empty signifier that is ‘the people’, the visual strategies that take place on a daily basis in the media might not only be seen as completely distorted productions of our times. Instead, they can also be considered as materials that can be easily deconstructed, so as to offer a clearer vision on how democracy looks like today. The process of enacting populism, to make the aesthetic strategies embedded in the creation of a visible consensus, comes together with interferences put at play with the mediascape. Here, the artistic projects find new potentialities to impact the contemporary imagery on politics as seen in the works produced for the show. Moreover, developing a historical perspective on the idea we have on populism, generates tools through which an awareness is created, and consequentially a potentiality for change, in our ways to re-think the meaning of participation as a fundamental act for democracy.
www.kadist.org