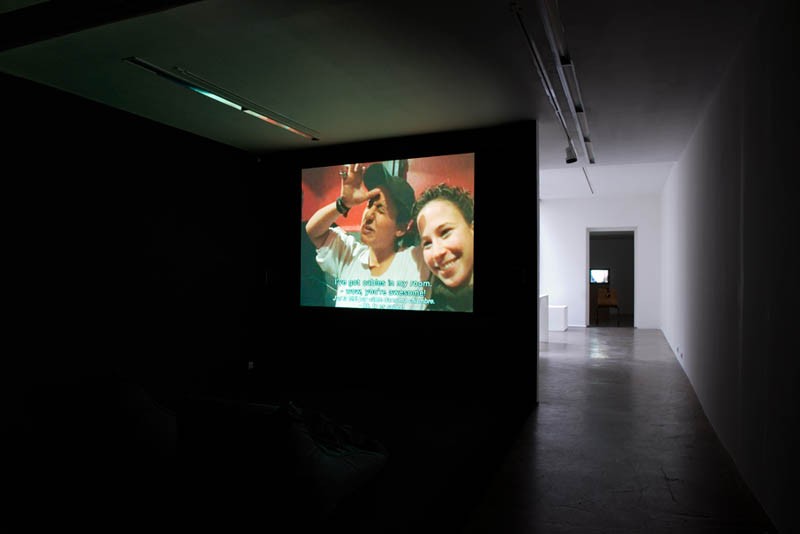 In their inidual practices Maayan Amir and Ruti Sela explore issues of national identity through the intricate scope of authority, morality and sexuality. They capture moments from their immediate surroundings but also create situations from it that press their subjects to take position: revealing their thoughts and intimate feelings entangled with the complex political situation. The camera, their usual tool, incarnates the artists’ position: it provokes reactions but remains at a certain distance.
Their films portray the inherent contradictions of a generation that has to live “Beyond Guilt” — the title of their collaborative video trilogy.

Shot between 2003 and 2005 in the underground night of Tel Aviv, Amir and Sela seduce the interviewees in the restrooms of nightclubs or use an Internet chat service to invite them in hotel rooms as part of the undermining of power relations between the filmmakers and those who are filmed. Those seemingly erotic conversations often take an unexpected turn, and conflict erupts where it is least expected. The film reveals the overpowering influence of militarism on society and the effects of occupation as factors delineating the Israeli identity, even in the most private moments.
In order to pursue this series of investigations seen from the perspective of a generation, the exhibition presents two videos shot and edited during Ruti Sela’s video class with students.
One entitled “History of violence” is a tour in the Haifa Art Museum shot in 2009 with students from Haifa University. The museum visit takes a sharp turn when students come across a number of works by Mona Hatoum, a Lebanese artist of Palestinian origin. This encounter leads to a stormy political discussion on the effects of cultural boycott among a number of students, who represent a microcosm of Israeli society: a Muslim Arab, a Christian Arab, a Druze and a Jew.
The second video entitled “People Will Comply” (2010) takes place in the Digital Art Lab in Holon during the exhibition “Evil To The Core” that dealt with Milgram’s experiment which measured the willingness of study participants to obey an authority figure. This experiment reminds the students of their own war stories lived during their military service. In this series of filmed workshops, in confronting her students with artworks and by the presence of the camera, Sela questions the potential of art to provoke a political debate.
The exhibition at Kadist Art Foundation is the first solo exhibition by Maayan Amir and Ruti Sela in France. Their work Beyond Guilt is part of the collection.

Maayan Amir was born in 1978, she lives and works in Tel Aviv, she is an artist and independent curator. She is currently studying towards PhD at the interdisciplinary art studies at Tel-Aviv University.
Amir is teaching curatorial studies at Sapir Academic College and has edited a book about Israeli documentary cinema, published in 2008.

Ruti Sela was born in Jerusalem, 1974. She lives and works in Tel Aviv, Israel. She teaches art and video art at Haifa University and Avni Institute. She was awarded a BFA in art with excellence at the Bezalel Academy and an MFA from the studies Film Department, Tel Aviv University. She has won many awards for her work, among them is the Israeli ministry of education award for excellent Young Artist and in 2009 she won the Wolf Foundation, Anselm Kiefer prize.

Their works are shown internationally in exhibitions such as the Sidney Biennale (2006), the Istanbul Biennale (2009), Manifesta 8 (Murcia, 2010), Berlin Biennale in 2010 among others, and venues such as Centre Pompidou (Paris), Art in General (NY), TPW (Toronto).
www.kadist.org