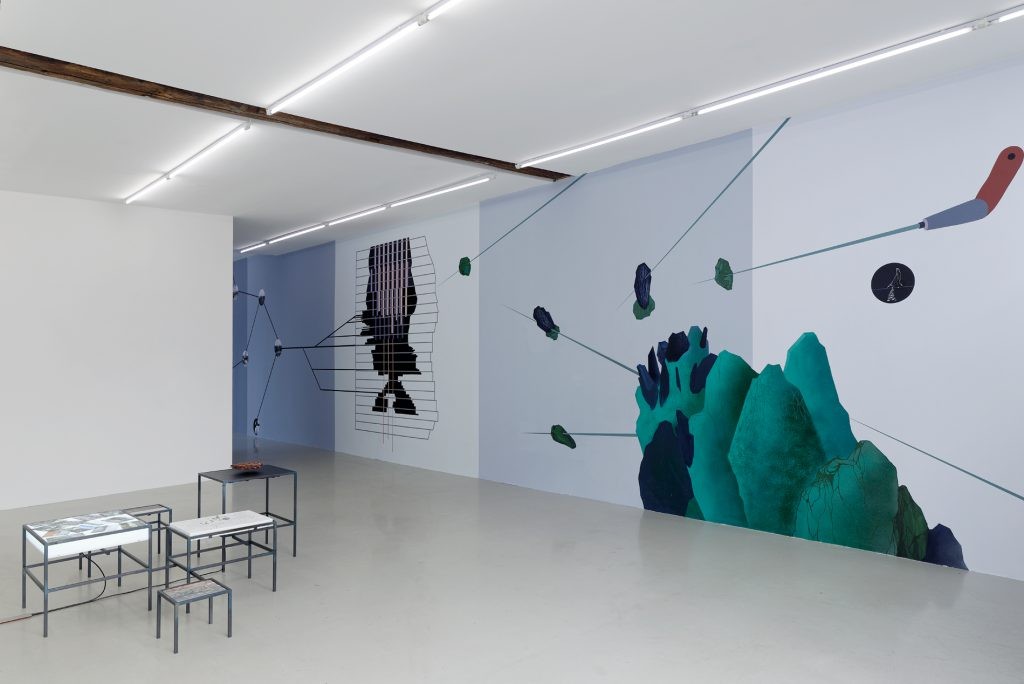 Otobong Nkanga’s Comot Your Eyes Make I Borrow You Mine explores what it means when material abundance is replaced by absence, and when desire is superseded by cool disinterest. Written in Nigerian Pidgin English the title implies “take your eyes away, I’ll lend you mine”. Operating within a personal, deliberately subjective register, Nkanga invites the viewer to “borrow” her perspective and to look intently at that which has been purposefully obscured.

Comot Your Eyes Make I Borrow You Mine is the third chapter in a series of exhibitions that began in 2014 with In Pursuit of Bling at the 8. Berlin Biennale and continued in 2015 at Frankfurt’s Portikus with Crumbling Through Powdery Air. In spring 2015, Nkanga travelled to Namibia, making her way along an almost entirely defunct railway line from Swakopmund to Tsumeb. She was intent on reaching The Green Hill in Tsumeb, an area renowned for its minerals, crystals and copper deposits. This hill had been hand-mined by the Ovambo for generations, who took solely what they needed. However, when Namibia became German South West Africa, the colonial regime began to mine The Green Hill industrially, extracting and exporting tonnes of minerals each year. What Nkanga encountered in Tsumeb was no longer a hill, no longer an active mine, but a dormant hole in the ground. Fenced-off from public access, the open pit is a guarded ruin with an uncertain status. Perhaps someday new technologies will allow further excavation or maybe it will become a destination for tourists. For now it reclines, still tinged with the green and blue traces of the minerals malachite and azurite; testament to the hill’s former abundance.

At Kadist Art Foundation, Nkanga will spend twelve days creating an ambitious wall drawing. For Nkanga, drawing is a form that enables connections to be mapped that are not necessarily “seen”, but intuitively felt. The wall drawing will stem from Nkanga sifting through both her memories of Namibia, as well as the vast amount of material she generated and collected over the ten day field trip: video, sound recordings, photographs, performance documentation, interviews and images from Namibian archives. The drawing will not be planned, but hurled into existence: raw, unfiltered and direct.

Furthering the approach of the drawing, Tsumeb Fragments (2015) is a small cluster of interconnected tables which gather together physical material: malachite stones, archival photographs, shreds of copper. The formation of the tables and the choice of objects question standard assumptions of display. Materials that are usually dispersed across diverse sites and archives are brought together. Nkanga begins to unpack whose vested interests determine what is, and what is pointedly not, allowed to be seen. Nkanga demonstrates how access to objects and images is often just as ring-fenced as any other resource.

Opening out the selection of “eyes” to be borrowed, in the video Remains of The Green Hill (2015) images of Nkanga’s spontaneous performance at and for the Tsumeb mine are overlaid with an interview she conducted with its very last Managing Director. His rhetoric smooths tales of profit and exploitation into progress and discovery. Tsumeb as a town is itself equally smooth; it has landscaped parks, restored colonial architecture, and a museum which triumphantly displays the story of the town’s founding in 1905. Yet the air in Tsumeb tickles your throat. Behind the town centre the copper smelter is still refining copper, just no longer Namibian copper. Further hidden from view is a growing black field, where tonnes of slag laced with arsenic and lead pile up, ominously waiting to be dealt with at some undefined point in the future.

In Comot Your Eyes Make I Borrow You Mine questions of agency are central: who has the agency to “see” and who is landscaping the view.
www.kadist.org