The Decapitation of Money 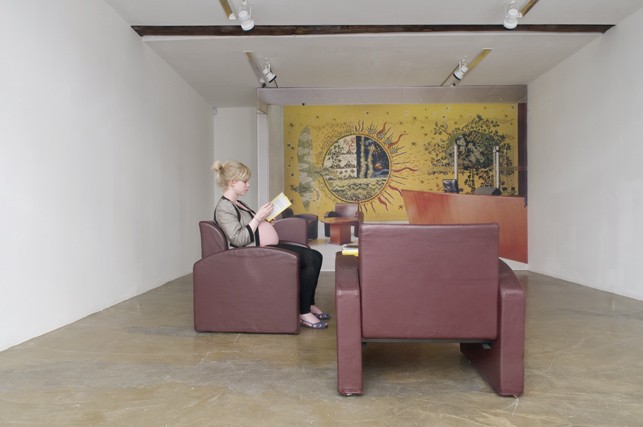 The Decapitation of Money, Exhibition view
Photos : A. Mole
THE DECAPITATION OF MONEY
05 July - 25 July 2010

In the exhibition, you are standing at the heart of a bicephalous space reflecting Goldin+Senneby’s main research led during their residency in Paris. Here, two historical events from the late 1930’s and early 50’s are confronted.

In one of these spaces, you find yourself reading a map of the Marly forest where Georges Bataille’s secret society, « Acéphale », was meeting around 1937 and notably celebrating Louis XVI’s regicide.
A few years later, Georges Bataille wrote La Part maudite (1949). In this essay on economy, he describes a society of abundance and eternal excess where in return potlatch techniques and sacrifice were necessary forms of luxurious consumption.

Nearly at the same time, in the early 1950’s at the very beginning of the Cold War, you are witnessing the emergence of Eurodollar, when Soviet and Chinese banks deposited dollars in Europe, in Paris at the BCEN (EUROBANK), known today as VTB Bank. Thus, the Dollar escaped the US financial, territorial jurisdiction and the very nature of money changed from a symbolic value to a virtual one. Money entered a new space of exteriority, beyond the control of the sovereign state.
Money was decapitated.

These are facts. Facts that are deeply entangled in a fictional narrative entitled Looking for Headless, commissioned by artist duo Goldin+Senneby since 2007. In this detective story, involving a murder (by decapitation again), the narrator travels to the Bahamas looking for the offshore company called ‘Headless Ltd’. Looking for Headless is published as a ghost written serial novel based on raw material sent by the artists correspondences, dossiers, tapes – and by the different artistic presentations of the project since 2007 in the form of conferences, lectures, videos or exhibitions.

At the Kadist Art Foundation, Goldin+Senneby underline a tenuous but precise speculation: Is the emergence of the Eurodollar and the later offshore finance the exact void where money disappeared, performing a contemporary radical consumption announced by Bataille in La Part maudite?

And if so, can ‘Headless Ltd’ be a contemporary incarnation of zataille’s secret society of the same name, « Acéphale »? Are they just mere coincidences?

The artistic project Headless is an omnivorous structure, a multi-headed project in which artists Goldin+Senneby outsource its development to different characters in the novel and independent practitioners in reality: a ghostwriter, an economic geographer, a set designer, and even art institutions.

Goldin+Senneby is the framework for collaboration between Swedish artists Simon Goldin and Jakob Senneby. Kadist Art Foundation is pleased to present their first solo exhibition in France.
www.kadist.org