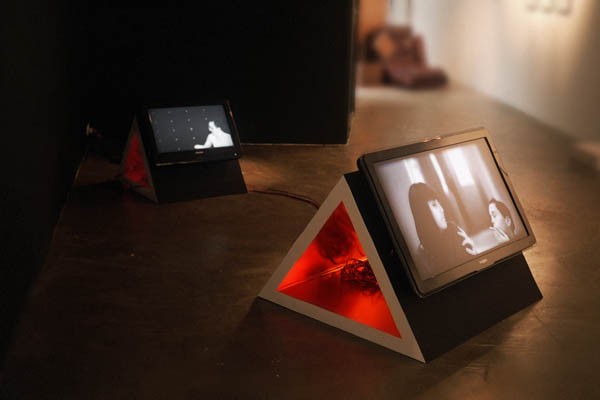 With Michal Chelbin, Douglas Gordon, Ho Tzu Nyen, Kate Mitchell, Mr&Ms, and Arin Rungjang.
Kadist Art Foundation is pleased to announce the exhibition conceived by Dougal Phillips following his residency. The Grip / La Mainmise approaches the work of artists from Australia and South-East Asia (alongside European peers) through a post-colonial framework that refers to metaphors of childhood, history, and power to explore the practices and concerns of artists from this region.

A catalogue will be published on this occasion.

How do we grasp and hold onto the world? The Grip / La Mainmise is an exhibition project about knowledge – about the giving and taking of how we understand the world and the faith we hold in the putting-on of hands, in the law-giver and the forefather. The title is respectfully appropriated from the essay by Jean-François Lyotard, in which he writes of the affective grip (mancipium) of childhood and the adult fables of emancipation within the complex economy of the grip – the child whose hand is held lacks a hand.

The exhibition brings together artists whose works engage with the giving of knowledge and the phenomenology of power. Through performance, photography, film and installation, the works in this exhibition propose novel, returning gestures of taking-back, an image-based banditry that operates outside of the normal economies. The question is asked: How can artists liberate the image, profane the archive, and re-colonize ‘firstness’ or prior knowledge?

The participating artists are drawn from Australia, Singapore and Thailand as well as from Europe, and the overtone of the returning journey, colonized and never-colonized citizens re-inhabiting and re-imagining the a seat of imperial (philosophical) power. A new work by Thai artist Arin Rungjang creates an environment within the gallery for a reflection on modern philosophy as understood through an interview with Pier Luigi Tazzi* set against Rungjang’s father’s history and the touchstones of immigrant Paris. In her photographs, Michal Chelbin poses the strange familiarity between and father and daughter with mirrored gazes and an unbalanced and uncanny power relation.

The Australian artistic duo and married couple Ms&Mr re-inhabit their own video archive from a 1980s
childhood, short-circuiting their shared and discrete histories with inspiration from Russian mystic Nikolai Fyodorov who believed immortality could be achieved through a ‘Religion of Resuscitative Resurrection’ – cosmic expeditions to reconnect with our grandfathers and ancestors. The absent, mirrored eyes of Douglas Gordon’s Spencer Tracy see but cannot be seen. What might we make of Tracy as icon, playing in his long career The Old Man, a universal father, and a Nuremburg judge?

Kate Mitchell brings an athletic, Australian subversion to the French icon of the chandelier, in a work that moves across durational performance, public projection and video. Her intensive and physical taking-over of the still and civilized light fixture is played out in the Paris streets, yet performed on the other side of the world. The order of play is the same register in which Singaporean artist Ho Tzu Nyen literally re-enacts the text of Nietzsche’s Thus Spake Zarathustra, in a dark, one-take heavy-metal video spectacle co-produced with film and theatre students as a self-reflexive pedagogical exercise. His work restages the giving of knowledge, the heavy burden of ignorance, and the complex and collaborative grasp on illumination and emancipation.
Dougal Phillips

*Pier Luigi Tazzi (Colonnata, Florence 1941) is a curator currently based in Capalle, Florence, and in Bangkok. He was co-director of DOCUMENTA IX in Kassel (1992)
www.kadist.org