This place you see has no size at all... 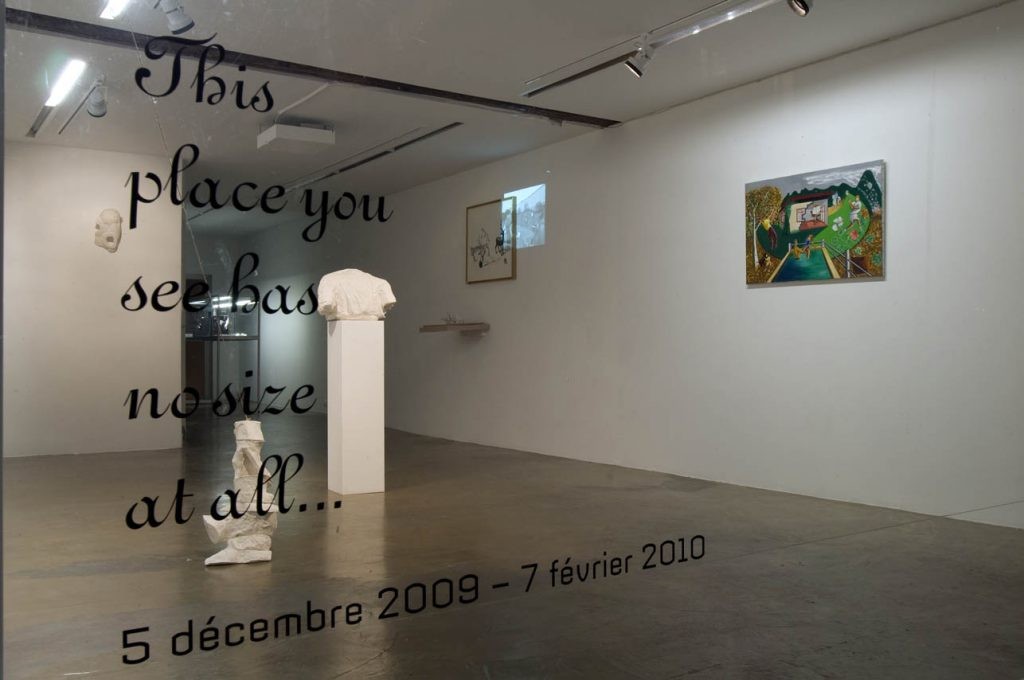 
Sir/Madam,
Everything I am about to tell you began with a sighting of a heron in a tree. There I was in the Jardin Trocadéro at the Parc de Saint-Cloud on a late summer afternoon, burying the bones of Tom Ripley, in what the history books told me was once a labyrinth. When I looked around, I noticed that the place had no size at all. In one instance, the landscape was unusually curvy and in another, intricate alleyways and corridors appeared miraculously as I turned corners. Though I could see no one, a flurry of recombinant voices echoed from the hedges and the dialogues of fourteen characters began to take on the qualities of those around them, in a seemingly ritualistic order.

“This place you see has no size at all...” is an exhibition rooted in the possibility of virtual and parallel worlds as a viable platform for the production and consumption of art. Originally proposed as an out-of the box adaptation to an “alternate reality game”, on July 22, 2009, artists were convened from around the globe to partake in a “scenario” at the Parc de Saint-Cloud in Paris, of which they had little knowledge of, yet were immediate to its origin of initiation. In collaboration with sci-fi writer Mark von Schlegell, an abstract time-travel guide was scripted, combining clues, facts, and prompts around the peculiarities of the garden together with the singular questions: What could you perceive as the present? What would this present be? What are the elements of the present? Who are the members of the present? What methods and tools could be used to arrive here? The guide spawned a chain of events suggested by and created for each of the artists with the purpose of activating a work and a communication process.

Puzzles, motion, fictitious force, heuristics, chambres, a perte de vue, lost item, incoherency, the dead end. In one of the alleyways I found a man resting on a bed-sheet. He was surveying the universe with a planisphere. He told me he got there via an air balloon in order to produce a shroud, that this shroud was an embodiment of all of us. A fiction of the strangest kind that can’t be materialized in any known form of art including classical conceptualism. He held an invisibility cloak that somehow protected him from the world of visible matter. It was sure to give him good fortune.

A hypothetical collective structure, a private happening, and now exhibition, “This place you see has no size at all...” is purportedly non site-specific; on the contrary it grapples with the objectives of context. At Kadist, newly commissioned works are paired together with existing works, prompting an array of interactions, relationships, and readings in the exhibition setting. Dear reader, what I am telling you is real. I believe in real things. If we did not have real experiences, how would we have dreams?
www.kadist.org