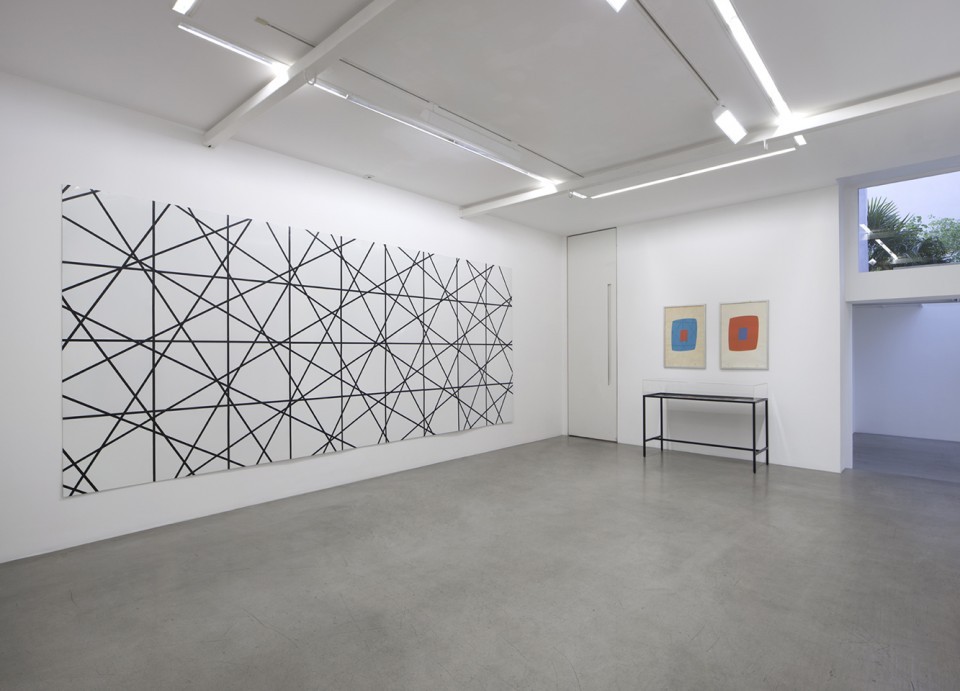 For his upcoming exhibition, Kamel Mennour is proud to pay homage to François Morellet (1926-2016), placing one of the gallery’s leading, historically significant artists in dialogue with four major figures of American minimal and conceptual art.

An improbable, certainly under-appreciated—when not altogether overlooked—axis of postwar geometric abstraction, “Cholet-New York” could almost be taken for another prank by François Morellet, a ‘rigorous joker’ according to Mo Gourmelon, ‘freak child of Mondrian and Picabia’ in the self-taught artist’s own words. Morellet remained very attached to his place of birth. Though he travelled widely, frequently visiting the world’s art capitals, he spent most of his time in Cholet. For a while, this hindered, or at least slowed down, the international exposure of his work. Or perhaps it was his indefatigable taste for frivolity and derision that kept the most Dadaist of French conceptual artists relatively separate from the official art history of the 1950s and 60s.

And yet Morellet adopted very early on attitudes similar to those of Kelly (1923-2015) and Sandback (1943-2003), with whom he became friends, as well as LeWitt (1928-2007) and Stella (born 1936), who knew at least a few of Morellet’s works when they were starting out on their careers. Morellet shared with such precursors from a New York that had replaced Paris as the epicentre of Western art an interest for systematicity, neutrality, and formal economy, as well as a taste for seriality, the ‘all-over’, and anti-composition.

Inversely, the echoes and exchanges uniting Cholet and New York were nourished by many, varied sources that François Morellet was always happy to evoke: from the concrete art of Switzerland (via Brazil) and Russian Suprematism, to Arab-Muslim decorative traditions in Spain, Pacific Islands bark cloths, Late German Baroque, etc. Morellet insisted that, not having gone to art school, his education was made ‘from one love to the next’, and his paintings ‘from one influence to the next.’

What is even more troubling, is that Morellet at times seems to anticipate explorations generally attributed to artists from the other side of the Atlantic. Striking analogies between some of his early works (such as Du jaune au violet, 1956, or his body of work made up of grids begun in the same decade) and the lines and concentric, monochromatic, or color-graded squares of Frank Stella on the one hand, or Sol LeWitt’s ACG (Arcs, Circles & Grids) series on the other, pose the delicate question of Morellet’s possible precedence. Would it not be preferable to see in these admittedly perplexing similitudes a case of pseudo-morphism, as Yve-Alain Bois suggests, where each artist’s approach conserves its own singularity however much it may resemble another’s? In any case, aside from the old arguments over a supposed transatlantic divide, there is no doubt today that François Morellet thoroughly deserves his place as a pioneer among pioneers.
www.galeriemennour.com