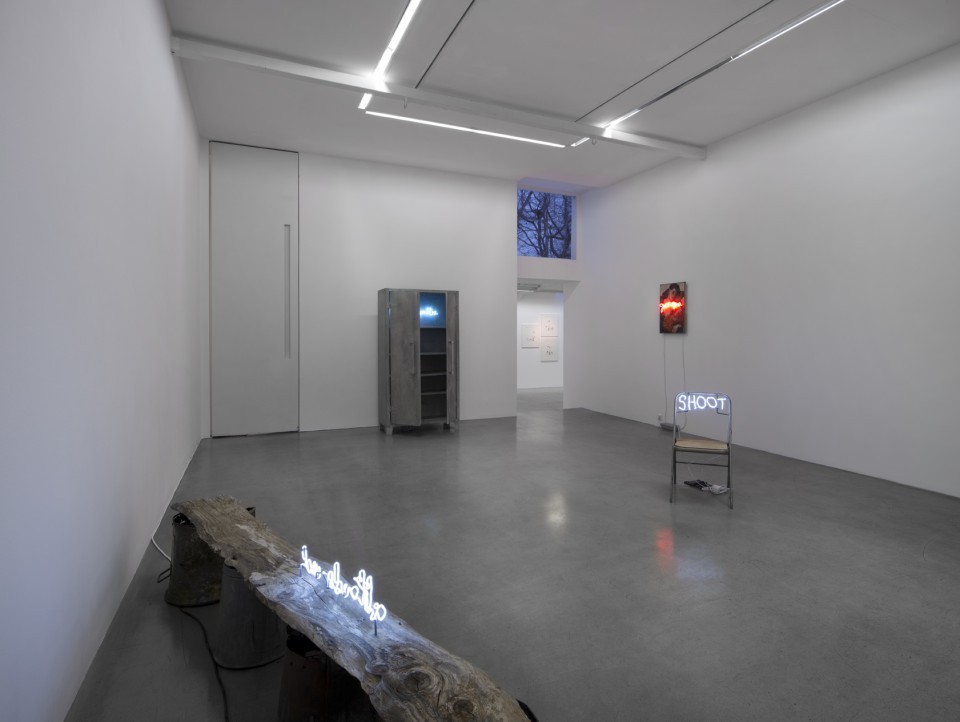 CLAUDE LÉVÊQUE
A major figure in the international contemporary arts scene, Claude Lévêque uses neon for its status as a universal standard, reproducing sentences or simple words in a trembling, fragile script that contains his whole philosophy and throws the viewer back on her own experience. The exhibited sentences are fragments of language, liberating and incantatory affirmations that act like poetic correspondences between states of mind. These sentences can also be found superimposed on found artefacts, serendipitous discoveries of the artist's wanderings. Everyday objects scarred by time or awkward, unfinished paintings, these artefacts have entered into a delicate dialogue with the neon inscriptions, creating a new story together.

Born in 1953 in Nevers (France), Claude Lévêque lives and works in Montreuil and Pèteloup (France). His work has been exhibited in numerous solo shows in France and abroad: at the Centre Pompidou and the Louvre Museum in Paris, the Villa Medicis in Rome, the Fondation Joan Miró in Barcelona, PS1 Museum and the Guggenheim in New York, Mori Art Museum in Tokyo, and Hamburger Bahnhof — Museum für Gegenwart in Berlin. In 2009, Claude Lévêque represented France in the 53rd Venice Biennale.

CHRISTODOULOS PANAYIOTOU
It would at first be possible to read Christodoulos Panayiotou’s pulp paintings within a formalist perspective, as the subversion of a late-modern monochrome aesthetic, with paper itself, pulped, taking the place of gouache or oil paint. But this paper is not only available material for the artist. It is the paper of Euro currency, in all seven note values, demonetised for the recent issuing of new notes by the Central European Bank. The demonetised notes have been obtained by the artist from the Bank of France for the purpose of making these paintings. Each painting is of the colour of its bank note, each time the dominant colours of the note blending into one colour. Political and symbolic representation disappears under a monochrome mass, where all iconographic particularities have been washed away.

This is a metaphor about the loss of value at work, at the same time as a redemption of all this highly valuable symbolic material, which is not going to be simply abandoned and destroyed but rather, in the effacement of its images, transformed into another value, iconic without iconography: the value of art. We can correlate these paintings with an earlier series of golden monochromes that the artist made together with a craftsman of Byzantine-style icons. With these successive movements, a vanishing point appears in the work of an artist who has never tired of drawing out the substantial fragility of our supreme belief, one of those holding our civilisation together in networks of exchange and commerce, to such a measure that the Greek word for it—nomisma, money/coinage — comes from the Greek nomos, the law.

This polyptych pursues a line of inquiry Panayiotou begun in 2008 with an installation bearing the name of the year: a mass of shredded Cypriot pound notes, then replaced by the euro (2008). In the pulp paintings series, the denominations are not indistinct, and their use was more widespread and more recent than that of the Cypriot pound. The euro itself is still in use, except for the 500 euro note which has been removed from circulation and here finds its tombeau. Furthermore, each work is presented as a painting rather than as a mass. Two aspects of the artist’s development appear here. On the one hand, a back-and-forth between narrower and wider spheres. On the other, the deployment of a constantly shifting tipping point between decoration and the manifestation of an artistic gesture. Both aspects can be seen in two works that dramatise questions of value, use, transferal and transformation, intimacy and the public sphere, decision and a take in community.

One can see them for instance in The Price of Copper (2014), a fountain made with a sheet of copper, a material at the heart of Cypriot history, home to one of the oldest copper mines in the ancient world. When the water stops flowing onto it, its value—use—is lost, and it returns to being nothing more than a sheet of copper. Bisante Venetory Fides is an even more recent work, a part of Panayiotou’s project for the Cypriot pavilion at Venice in 2015, for which he made a pendant out of a copper disc issued at Famagusta by the Venetian governor of Cyprus, Marco Antonio Bragadin, as a victory promise to his troops, who on returning to Venice were to be able to exchange it at the value of precious metal. Bragadin was skinned alive by the Ottomans after their conquest of the island. It has fallen to the artist to make good the unrealised fiduciary value of the coin, hanging it higher even than the value of gold or silver. Panayiotou enacts a sort of transubstantiation of values, making us into political and aesthetic witnesses to the process. He reminds us to look for the substance—pulp—in works whose uncircumscribed meaning is signalled by the fact that they are all marked Untitled. With the currency value that has given them their colour placed in parentheses, value itself is placed in parentheses all the while remaining visible.

In this series, as throughout Christodoulos Panayiotou’s work, there is one obvious value: something opposite to naïveté, a gay science strong with a deliberate knowledge, making different use of our unrealised values, lifting them into the universe of art.

KAMEL MENNOUR FEAT CLO'E FLOIRAT
Some of Clo’e Floirat’s drawings make you want to prick up your ears. This is perhaps not all that surprising for an artist who writes as much as she draws, and collaborates with musicians like Rufus Wainright and directors like Bob Wilson. ‘Look,’ I heard once at the entrance to an opening in a large art gallery in Paris, ‘I’m not the caterer, I’m a lender !’ Or was it rather one of these drawings I imagined sketched out before my eyes ?

The first time Clo’e Floirat’s graphic line caught my attention was at the Villa Noailles in 2013. The following winter, it took me a few minutes to make the connexion with the author who had come to the art press offices to offer us an interview with the artist Dieter Meier. It immediately seemed an obviously good idea to ask her to produce a monthly sketch for the journal, which she still does.

The lightness of her touch is misleading. Her satires of the art world often manage to touch on the very heart of the matter at hand. With her synthetic line and her supremely recognisable characters, she makes use of the most limited means, sacrificing them at times for a touch of colour if it is really necessary. Her practice, which she describes as drawing Crit’writing, is its own form of art criticism, a way of inviting us to sharpen our eyes.
© Anaël Pigeat

Clo’e Floirat is an art critic and artist: “artist-critic”. She began her rigorous training in New York, fleetingly leaving France to then attend the Design Academies of Reims and Eindhoven, Netherlands. This led her to Berlin, working with architects specializing in art spaces for another five years. From working – as an artistic director – with Robert Wilson as well as Rufus Wainwright in New York for several years, her interests have recently culminated in her graduation from the new master in Critical Writing in Art at the Royal College of Art, London. Clo’e is a regular contributor to various publications, e.g., artpress, frieze, Intramuros, L’Officiel Art and the World Of Interiors. Clo’e has become known for her signature drawings – a combination of drawing and writing with a critical orientation, into what she calls drawing Crit’writing – that cast a critical, humorous and refreshing look on the world of contemporary art. “The drawing is not an end but an intermediary to urge for more thoughts and opinions, to foster our individual ‘esprit critique’.”
www.galeriemennour.com