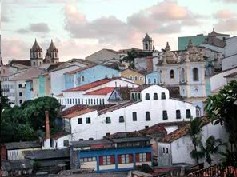 For the inaugural exhibition at galerie kamel mennour’s new premises, Daniel Buren demonstrates yet again his incredible talent for inventing new pathways for his art – a talent he has been displaying for over forty years now. Although used to creating projects for new places, this is the first time he has found himself building something for a space which is itself still under construction. Hence his conception has had to come from examining the plans and, above all, from his foresight, informed by experience: “the space of a particular place indicates certain paths for me to follow, certain visions. Here, I had the feeling that what could exist afterwards in a different place would always remain partly attached to this place. It is, It will be. 1 ” When one thinks of Daniel Buren’s work, one is struck, above all, by the inseparability/interdependence between the work and the space. Instantly recognisable due to his use of vertical stripes, whose width is always 8.7cm, Daniel Buren had already made a name for himself by the end of 1967, having created the notion of a work in situ: “a work that takes into consideration the place in which it is being shown/exposed, which cannot be transported elsewhere, and which must disappear at the end of the exhibition 2 ”. Intrinsically linked to the space, the work has no capacity for mobility and cannot, therefore, spread outside the place that gave birth to it: for example, Les Deux Plateaux in the courtyard of the Palais Royal in Paris (1986).
In 1975, following his solo exhibition at the Mönchengladbach museum, Daniel Buren was faced with a problem that arose when his in situ intervention was moved to the museum’s permanent collection. This experience, and the solutions he found, formed the basis for “cabanes éclatées” (“exploded cabins”), and then for his works known as “situées” (“situated works”). Thus, in 1984, came the second turning-point in his artistic life, with the perfecting of the second “cabane éclatée”. It consists of a cube formed by a wooden framework (the “cabin”), covered with stretched fabric, with openings made in it to create free elements (doors, windows, etc) which will explode and become fixed on the first walls parallel to the original cube. With the “cabanes éclatées”, Buren’s work has been evolving towards the production of objects that can be reconstituted in various places and surroundings, taking their dimensions into account, and provided that certain rules (of presentation and installation) are respected. The “cabins” are “mobile, and what is more, their mobility is one of their most important characteristics, compared to most of my other works 3 ”, explains Buren. The effect of this is that the notion of repetition, so essential to his work (the constancy of his stripe pattern for example), is opened up to the notion of regeneration.
www.galeriemennour.com