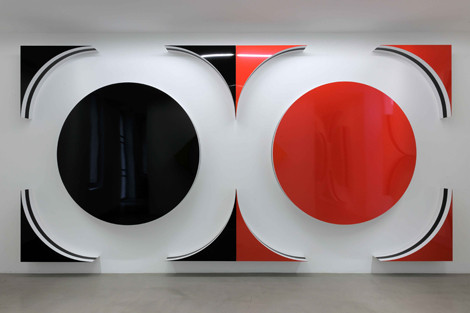 Entitled “Quand les Carrés font des Cercles et des Triangles: Hauts-reliefs situés. 2010”, Daniel Buren’s third solo exhibition at galerie kamel mennour heralds a programme whose dominant themes are those of metamorphosis and of a combination at once geometric and colourful.
The three new groups of works on show are based on the principle of the fragmenting of a square form, using this means to generate other elementary forms.
Once installed on the walls, the latter restore the original quadrilateral, but developed in space. Thus, according to the homothetic sets frequently utilised by the artist, these squares, in their closed position, have sides that measure 2 metres; when they are opened up they can stretch to over 5 metres, incorporating the surface of the host wall.
Begun approximately four years ago, these works seem to be situated between earlier works produced at the end of the sixties (1968 and 1969, then 1975) and the Cabanes Eclatées created from 1975 onwards. The first group appeared to suggest the explosion of a canvas painting, with scattered elements of fabric, whose installation on the walls nevertheless restored the original form. Playing itself out in accordance with the x and y coordinates of the picture rails, the Cabanes Eclatées progressively took over the space and architecture: geometric forms were cut out from the walls of these elementary cubic constructions (the cabins), and found themselves projected against the surrounding walls, following a scrupulous translation.
If fragmenting or exploding seems to be a recurring motif in Daniel Buren’s work – if not his main tool – it is because his original project, in respect of art, and more specifically painting, aims to break with a system of representation that makes the picture dependent on a single point of view, in its manufacture as much as when it is interpreted. Thus, following in the footsteps of Piet Mondrian, Theo van Doesburg or even Pollock, he seeks to give equal importance to the whole surface of the canvas, without favouring any one point of view over another. It is through his powerful reflection on these subjects in particular that Daniel Buren has affirmed himself as an artist of our time.
In an interview, Jérôme Sans has asked him if he regards his work as being “open”, in the sense set out by Umberto Eco: a visual work that seems to be completed –undoubtedly summing up the philosopher’s thinking too briefly – by the viewer, a book by the reader, music by the interpreter. To which the artist responds that this is undoubtedly one of the main ambitions of his work. And indicates that it can only be open once he has established the rules of his game, his restrictions. (Au sujet de... Entretien avec Jérôme Sans, 2000, Flammarion). Paradoxically, therefore, Daniel Buren reminds us how much the setting out of his outil visuel from 1965 onwards allowed him to work without fear of repeating himself, divested of the quest for identification (the recognition of his hallmark), which sometimes pervades an œuvre and impedes its creator.
With the Cabanes Eclatées, Daniel Buren undertook innumerable experiments, as much in the configuration of the spaces he took over as by the abundant palette of materials he utilised, the work thereby becoming its own site, modified by its host architecture, which it had, at the same time, re-characterised. Above all else, the Cabane is the place of a multiplicity of points of view – as many as the spectator can activate by moving between its interior and exterior, and through the intervention of surface reflections.
So, what is it that interests Daniel Buren in this offering installed on the walls, these high-reliefs (which do not, you will have gathered, constitute in any sense the dominant direction of his work today, but merely one of his innumerable projects)?
It is pleasing to think that the moment he left the picture rails in order to take over the space, he opened up a breach in the scheme of art; he sought to highlight the limits of a work’s autonomy and the neutralising role of the museum. Launching an attack on architecture was, therefore, a political and ideological quest. Thirtyfive years later, the breach has become a four-lane, ditch-lined highway, and in a sense, Daniel Buren can explore other avenues. For example, that of walls. The very great diversity of materials he experiments with in the Cabanes Eclatées, the infinite list of supports used in his public commissions or in the private sphere, allow him to consider this location with a renewed approach. To such an extent that wandering through the gallery space among these exploded and mirrored forms can set off a powerful, chromatic vortex, shaking our certitude that these highreliefs are truly fastened to the walls...