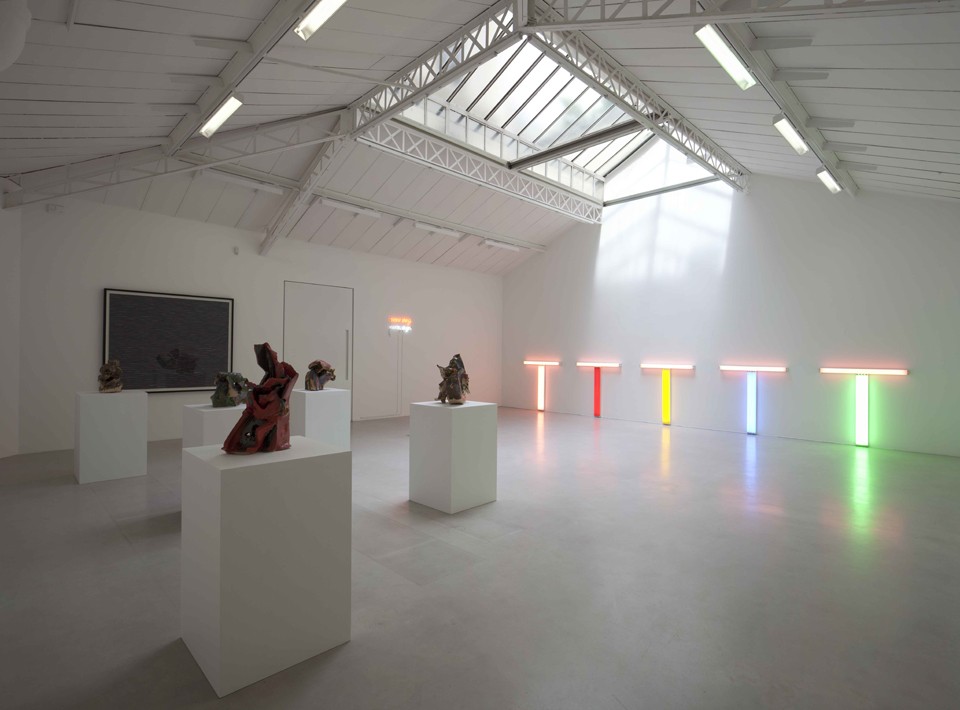 Freely adapted from a work of Nauman’s—where the violent visual attack evoked in the expression ‘‘better than a poke in the eye’’ is represented literally and mischievously one- upped—the title of the exhibition offers an exploration (cruelty excluded) of different modalities, generally qualified as minimal, post-minimal, or conceptual, all of which are the result of a shared interest in a certain troubling of vision.

Double Eye Poke brings together phenomenon-works based on the human figure—at times manifest, at others somewhat secret—embodied in time and space. This figure, often fragmented, sometimes even completely abstracted, takes on various forms: from the human face, at once raw material and object of symbolic representation, as with Benglis’ objectifying caresses; to the full body as place and tool of the trial and pleasure of repetition, as with Nauman’s amateur choreography, bordering on the absurd; to the traces and physical prints left by the artist-creator (or the “art worker” in his service), as with the irregular random geometry of LeWitt; to the peers (Donald Judd) and tutelary figures in the history of art (Vladimir Tatlin) who inspire Flavin’s evanescent structures...

Now a disenchanted statement (doesn’t one of Nauman’s neon signs also say, none sing?), now a ghostly apparition (don’t LeWitt’s instructions end up in one enormous, apparently chaotic scribble?), Double Eye Poke offers a challenge to the being of perception and thought. A challenge in which sensational works reveal themselves to be essentially critical, where the language (and its games) that constitutes them underlines even as it translates the necessity of discovering the invisible at the heart of the visible. Language also specifically qualifies that which was thought to have been outrun: not ‘‘paintings’’ but rather wall drawings, image- objects, or ceramics. The pictorial reappears right where it was no longer expected. To borrow Hal Foster’s phrase, “What you see is never quite what you see.”

York. She is currently the Editor of Sol LeWitt Wall Drawings Catalogue Raisonné (Artifex Press, NY); and is preparing an exhibition of the LeWitt Collection at The Drawing Center (NY) in collaboration with Claire Gilman, Senior Curator. Gross is also Editorial and Curatorial Advisor at Mémoire Universelle (Brussels), an experimental book series functioning as a subjective encyclopedia

She has organized a series of Sol LeWitt and LeWitt Collection exhibitions, as Adjunct Curator at Centre Pompidou-Metz (France), and Guest Co-Curator at M - Museum Leuven (Belgium) and Madre - Museo d’Arte Contemporanea Donnaregina, Naples. She is the Editor of Sol LeWitt’s newest monographic book published by Centre Pompidou- Metz Editions (2012-2013).

Her recent publications include: “The Invisible Man. From Skepticism to Paranoia: A Brief Survey of Predators, Photography, and the Birth of Modern Camouflage,” essay in Mémoire Universelle, vol. “Manimalisme” (Brussels: MU, 2014); “From Icon to Text and Back Again: Ines Lechleitner’s Metamorphoses,” essay in Ines Lechleitner. The Imagines (Berlin: Sternberg Press, 2014); “Sol LeWitt and the (Re-)Birth of Wall Drawing,” essay in Auf Zeit / For the Time Being, exh. catalogue (Staatliche Kunsthalle Baden- Baden/Kunsthalle Bielefeld/Verlag der Buchhandlung Walther König, 2013)
www.galeriemennour.com