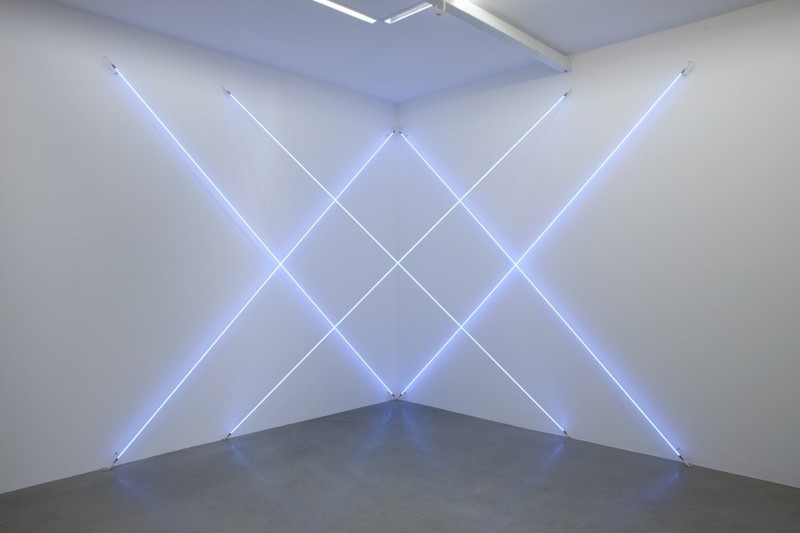 “Let eternal perpetual light shine upon them.”
Introit from the Requiem Aeternam

In Gustave Le Gray’s famous photograph, a beach bathed in an ocean of liquid gold is revealed in sunshine, as if at the very dawn of the world. Further on, a Dan Flavin neon cleaves the darkness with a bright flash of lightening so that, as in Genesis, there may be a morning and an evening. With a glowing fibre optic thread, Daniel Buren, for his part, weaves scintillating veils in which chaos has been defeated by the spirit of geometry, just like François Morellet’s Triple X or Claude Lévêque’s vertical installation. In order to overcome oblivion, Jannis Kounellis inscribes the letters of his name in fire, while Michel Verjux pins our shadow in a circle of light, like demented and disorientated moths captivated by the rays of a lantern on a summer’s night. In essence, we oscillate between the force of attraction – akin to that of a black hole –and the virginal brilliance of Anish Kapoor’s alabaster. In a delicate fetish, David Hominal chooses “Neither the sun, nor death”. But sometimes, darkness triumphs. Michel François’ light bulbs do not light up anything. And despite his legendary clairvoyance, Eugène Delacroix’s Othello, trapped by dark desires, is consumed by a murderous passion for the one he loves; a dramatic ending to which Mohamed Bourouissa seems to offer a contemporary image, in a composition that hints at Caravaggio.
This exhibition depicts the secular combat of darkness and light.
Of fall and redemption. Of hope and hopelessness. In memory of the poet Giuseppe Ungaretti, Alfredo Jaar “is lit up with immensity”. Ann Veronica Janssens cuts off a corner of sky, like the augurs of antiquity who foretold in it a radiant or deadly future. In a work by Miri Segal, the “perfect future” is eventually lit up.
Light, which cannot exist without space and time, is the stuff of artists, who battle daily in order to keep the spark of creation alive. For art remains a beacon shining in the night, a glimmer in the shadows. A shroud of the immortals; a funereal splendour.
www.galeriemennour.com