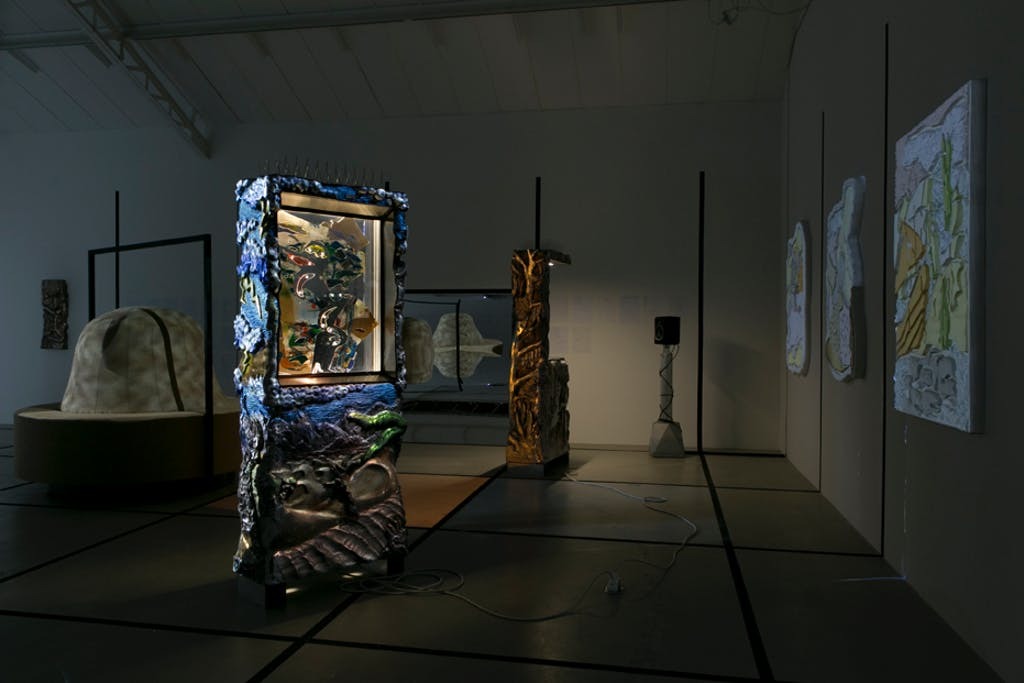 This is the story of a post-capitalist dehydrated camel who gets some young, dynamic fennecs to build a wall at the expense of the worker ants...

Like the fable that accompanies it (a text that is at once a literary object, a fictional story, and an allegory), Neïl Beloufa’s first solo exhibition at galerie kamel mennour is a stratified choose-your-own-adventure. Engaging the proteoform possibilities that characterise his practice, Beloufa has sketched out a number of propositions with a single movement and within a single space, as if he were layering layers on Photoshop, copy-pasting incompatible aesthetics and theoretical discourses. The exhibition, a postdigital Bride Stripped Bare, displays an instability of meaning that requires of the viewer that she change the paradigm under which she relates to the works, which is no longer an authoritarian and/or democratic and/or participative configuration, but rather requires that she adapt to the idea that meaning here, if there is any, is irreducible, malleable, and subjective.

To begin with, there are the bare, cold, ‘modernist’ objects, benches/ sculptures turning in no fixed direction, hybrid totems, abstract bas-reliefs, all attempts at pure form that lose their autonomy and their efficacy becoming surfaces for video projections. Neo-Pop colours, a cartoonish, Game Boy aesthetic, and holiday home movies simultaneously entertain and create a diversion. And then there are the number paintings, ersatz conceptual art, the melancholic remains of a discourse on labour. Aesthetics and discourses cohabit here. They are uncertain, precarious, and contradictory in their simultaneity, corresponding to a horizontal culture that attaches no value to a hierarchy of information, and where the signs of the existence of phenomena have replaced phenomena.

This aporia is the result of a practice in which the exhibition is treated as a ‘system’. It questions its own conditions of production, incorporates them, and in this way volatilises the rhetorical cement that conditions its existence. In his films, Beloufa usually troubles the viewer’s ‘denial of the plausible, twisting the suspension of critical intelligence that underlies all forms of adhesion to our contemporary fictions, whether these are cinematic, political, economic, or metaphysical. He goes further here, happily incorporating the strategies of entertainment in the construction of the exhibition. In this do-it-yourself Disneyland, the visitor finds herself at once at a fairground, in a gallery, and in the artist’s studio. The allegorical camel becomes the mascot who ‘immortalises the dream in the viewers’ gaze’. Making people dream is a job.
Myriam Ben Salah

Neïl Beloufa (born in 1985 in Paris, France) is a Franco-Algerian artist who lives and works in Paris. He was a student at the École Nationale Supérieure des Beaux-Arts and at the École nationale supérieure des Arts Décoratifs in Paris; at the California Institute of the Arts, Valencia (USA); at Cooper Union, New York and Fresnoy - National Contemporary Arts Studio, Tourcoing (France).

Nominated for the Prix Marcel Duchamp in 2015, the Artes Mundi (Cardiff, United Kingdom) and Nam June Paik (Essen, Germany) prizes in 2016. He was awarded the Meurice Prize for Contemporary Art 2013, Audi Talents Awards 2011 and the Agnès B. Studio Collector Award 2010.