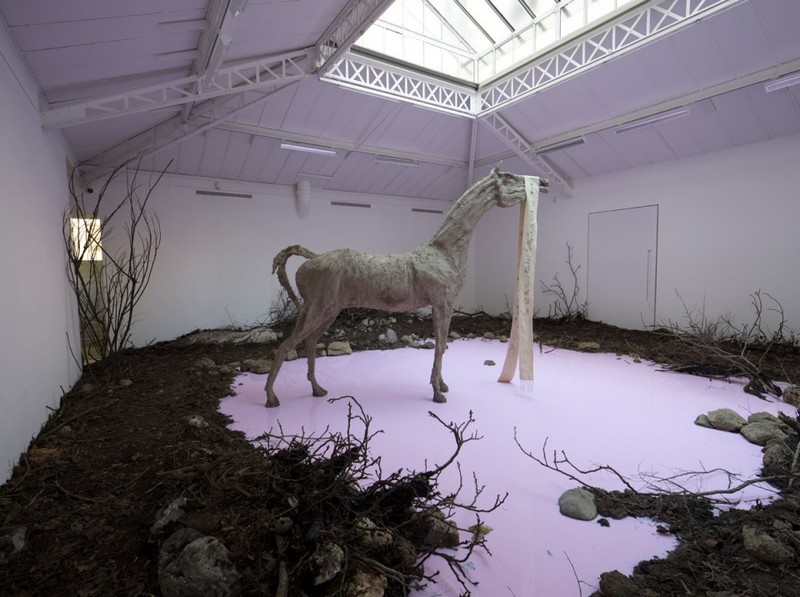 This is not an exhibition. This is a dream. Of the strength of those who make us Visionaries in Arthur Rimbaud’s sense of the word (“The point is to arrive at the unknown by throwing all the senses into disorder”1). Petrit Halilaj, born in Kostërrc, Kosovo in 1986, creates a world both surreal and familiar at the galerie kamel mennour. We enter into this world through astonishment, immediately finding ourselves face to face with a forest of ocarinas perched on legs as though they were trees. Breathe into them and they sing. Ocarinas are wind instruments that have been made in Kosovo since the Neolithic Era. Those composing this forest of ocarinas were modeled and then overmodeled by the artist, who undertook to learn the technique from one of the last ocarina makers in Kosovo, Shaqir Hoti, expressly for this installation.

Both the shapes and sounds of these ocarinas lead the visitor toward the extraordinary vision in the gallery’s basement. There, in an intensely pink lake edged by earth, thickets of branches, and stones, stands a horse several meters tall. On its muzzle, the artist has placed a shoka, a long, traditional belt onto which he embroidered the phrase that gives the exhibition its title:

“Yes but the sea is attached to the Earth and it never floats around in space. The stars would turn off and what about my planet?”

Like all dreams, the installation imagined by Petrit Halilaj presents itself as an enigma. It is a mysterious story whose every element is a world unto itself, and which each viewer is invited to people with his or her own memories, desires, and intimate horizons. Of course, all of the young artist’s works are shaped by History’s intrusions into his childhood, marked by the war in former Yugoslavia and life in an Albanian refugee camp; but for him, the essence of his work is in the establishment of new arrangements, new relationships, and the vital promises they hold. We see evidence of this in the green grass growing on sixty tons of earth from his native land, transported to the contemporary art fair in Basel (“Kostërrc”, 2011), as well as in his cohabitation with flying birds and his companion in the work he created in 2013, on the occasion of Kosovo’s first national pavilion at the Venice Biennial, “I’m hungry to keep you close. I want to find the words to resist but in the end there is a locked sphere. The funny thing is that you’re not here, nothing is”. This motivation is likewise present in “Poisoned by men in need of some love” (2013), which petitioned for the resurrection of the Museum of Natural History in Pristina, whose treasures had been left to mold in basement storage in favor of a folkloric exhibition with ideological ends.

For this new work at galerie kamel mennour, Petrit Halilaj calls on the memory of his great-great-grandfather, Baba Gan. While Halilaj never knew Baba Gan, the story of his life is part of the family mythology passed on to the artist by his raconteur grandfather. Baba Gan was a Kosovar intellectual who opened a school and who was assassinated at the beginning of the 20th century. He was regularly called on to calm quarrels and to resolve disputes. While small in stature, he imposed his role as moderator by arriving on a large white horse and wearing a traditional belt that his wife had embroidered with stories that became symbolic statements... That said, it should be noted that he made use of his gift as a peacekeeper more adeptly in the outside world than at home...

The detergent-pink lake, aside from its dreamlike power, evokes the interior of Kosovar homes, where extreme cleanliness is de rigueur whereas the public space is treated with indifference. It is as though the inhabitants search for an unsullied space by ridding their homes of the traces that they cannot purge from the public — and political — space.

The tension between interior and exterior, between the big horse and small Baba Gan, between ocarinas and stones, between the pink lake and the dark soil, between the masculine horse and the feminine belt, establishes a territory in the sense conceptualized by the philosopher Gilles Deleuze: “There is no territory without a vector of leaving the territory. And there is no leaving the territory, no deterritorialization, without a vector of reterritorialization elsewhere”2. This tension between territory and movement invites the visitor to play with the different vectors of his or her own music, with Petrit Halilaj’s words in mind:

“Maybe I do believe in dreams.
In fantasy.
In miracles or I don’t know, but.
I do have the desire to dedicate my attention.
And be there in the middle of you.
And not forget you.”3

1 in Letters known as “of the Visionary”, to Georges Izambard, May 1871.
2 in Gilles Deleuze, “L’Abécédaire de Gilles Deleuze”, A for animal.
3 in Gagarin 19, “Communication seems to be lacking us as well”, talk between the artist and his sister, 2009.