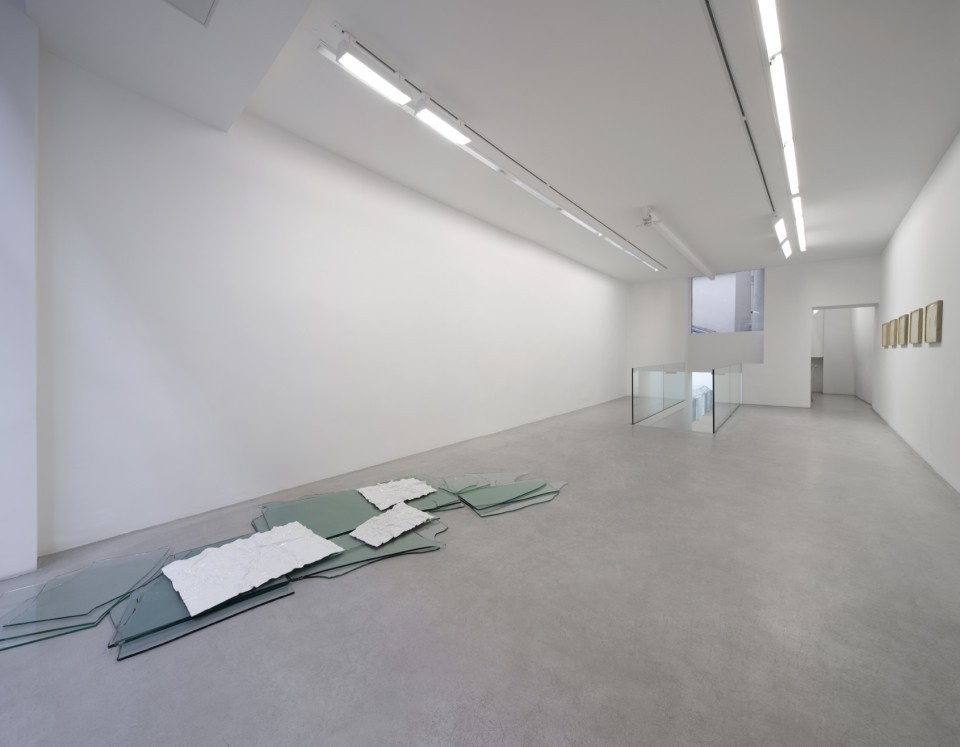 For her second solo show at the galerie kamel mennour, Chinese-born artist Shen Yuan proposes a series of new works that, with lucidity and poetry, evoke the notions of borders and displacement. She invites us to share a vision of the world in which man, animal, and nature are perceived on an equal footing.

The central piece in the exhibition, Étoiles du jour [Day Stars], is an installation made up of a light box stuck over with resin shapes representing the eyes of different animals. A white light streams through their oversized pupils, as if the operator of vision has been inverted: in order to reveal an interior light, or rather to light up the world? Shen Yuan has suggested that these eyes might be thought of as ‘reflections of the light of the cosmos’. As she reminds us, ‘man perceives the world by day, animals by night’: beyond appearances, the borders between the two worlds are above all projections. One can easily take the place of the other. Don’t we say of the lion that he is valorous, and that man is a beast? Like so many hockey discs sliding over a slippery surface, these eyes are encircled however by metallic fence, as if in a prison yard.

As with the melting of the glaciers evoked in Dérives, here Shen Yuan treats the question of displacement: the migratory movements of the past and present, but also the mobility of opinions, the volatility of political decisions. For the artist, migrant populations are like so many people ‘lucidly dreaming’ of an elsewhere, who are on the move by necessity, looking for more clement places, possible refuges. Borders are a constraint that oppose the natural need for displacement felt by humans as much as by animals. Differences of language, culture, and habits often provoke doubt and fear, and get in the way of hospitality and trust, like so many invisible boundaries.

This question of perception can also be encountered in Aveugles [Blind], a work in which Shen Yuan proposes an analogy between different forms of life. By hollowing out the pupils of five resin eyes, the artist makes room for chance textures and patterns evoking nature: a desert, rocks, a swamp. Echoing the power of vision evoked in the former piece, the blindness at work in these pieces is that of our own contemplation of natural or social phenomena: a blind vision.

This fluidity, this porosity between categories of thought equally shines through Dérives. Three glacier-shaped pieces of porcelain are placed on a carpet of broken glass. These pieces of glass flow together like a river in movement. The glacier seems to drift, and for the artist its movement evokes ‘a form of biological migration’. By creating a homology between the notion of human migration and glacial drift, two phenomena in exponential development, Shen Yuan undermines the moribund vision of a supposed hierarchy between worlds, and suggests that human problematics are also those of nature, and vice versa.

A series of drawings ironically draws our attention to this persistent need of ours to create such distinctions, and so to discriminate. Face et profile [Front and Profile] is made up of five diptychs each representing a potato seen from the ‘front’ and in ‘profile’. Each potato represents a different variety and colour, like the diversity of human origins.

She took part in numerous group exhibitions, including recently Puissance civile, at the Minsheng Art Museum, Beijing and Think Big, during Fiac Outdoor, Beaugrenelle, Paris; as well as Marseille-Provence 2013, at the Vieux-Port de Marseille; Reactivation, at the 9th Shanghai Biennale; J’ai deux Amours, at the Cité nationale de l’histoire de l’immigration, Paris; Artistes chinois à Paris, at the Musée Cernuschi, Paris; Art for the World (The Expo) – during the World Expo, Shanghai; Reshaping History, Chinart from 2000 to 2009, at the CNCC – China National Convention Center, Beijing; 85’ New Wave, The Birth of Chinese Contemporary Art, at the UCCA – Ullens Center for Contemporary Art, Beijing; La force de l’Art, at the Grand Palais, Paris; during the Liverpool Bienniale; Cities on the Move at the CAPC, Bordeaux, the PS1, New York and the Louisiana Museum of Modern Art, Humlebæk.
www.galeriemennour.com