Claire Morgan. Under the Sun 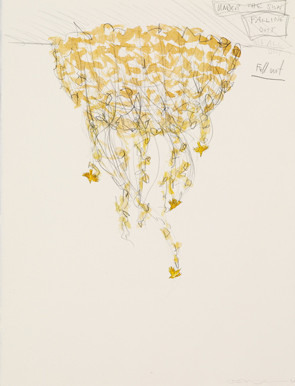 Claire Morgan: Fall out, 2010, watercolour and pencil on paper, 36,8 x 28 cm
The Karsten Greve Gallery is pleased to present the first one-man show of Claire Morgan (born 1980 in Belfast) in Germany "Under The Sun". For this occasion, Claire Morgan has worked on ten new installations and twelve related drawings.

Claire Morgan’s fragile, hanging installations reflect her interest in natural processes and organic materials. In her works, the artist engages with the elemental conditions of man in his habitat and reveals the impossibility of grasping the complexity of life and death. Elegance and beauty, but also senselessness and horror, are present in her installations and drawings. Simultaneously poetic and vexing, they express the ambivalence of life.
The artist creates hanging geometric structures made of thin nylon strings, leaves, or bits of plastic. Inside the geometric shapes are mounted animal bodies in a state of movement. Through the action of the animals, the precisely constructed geometric forms are ruptured and dynamised so that the objects oscillate between stagnancy and movement, order and chaos. The works seem to be both floating and weighing down, weightless and compact. The use of organic materials, but also artificial materials from our everyday world, results in a simple but at the same time expressive material aesthetics.
A central work of the exhibition is "Fall Out (Under the Sun)", a hemisphere made of yellow Gingko leaves, suspended from the ceiling, through which canaries fall down spirally, leaving traces. The beholder can trace back the trajectory of the birds through the sea of leaves, which captures the fleetingness of the moment and explores the relationship between dynamics and stagnancy. The work "Throe" presents itself as a sphere made of thistle seeds, which seems to be simultaneously weightless and massive, in whose centre two crows collide and intertwine in a spiral. The sphere serves as a stage for the almost motionless struggle of the crows that are forming and internal black ball. "The Grass Is Always Greener" consists of two cuboids made of green plastic parts, arranged side by side, in which two squirrels are enclosed. The animals are in identical environments, facing each other, but isolated from one another and imprisoned within their space. The sense of isolation and constriction is increased by the garishly green, artificial-looking colour of the plastic pieces that surround the animals. Animals serve the artist – also in her other works – as symbols for human existence. An awareness of the limited significance and influence of the single individual, but also of the beauty that hides behind the impossibility of grasping this, are revealed in her sculptures and drawings, and form a leitmotif of the exhibition.

Claire Morgan has been presented with solo shows in Belfast, London and Paris and she participated in numerous international group shows, for example 2009 in the Palais de Tokyo, Paris and 2010 in the Museum of Arts and Design, New York. She received the Annual Bursary Award from the Royal British Society of Sculptures and the Roy Noakes Award from the Royal British Society in 2004. 2006 Claire Morgan got the Premio Fondazione Arnaldo Pomodoro from the Fondazione Pomodoro in Milan.
www.galerie-karsten-greve.com