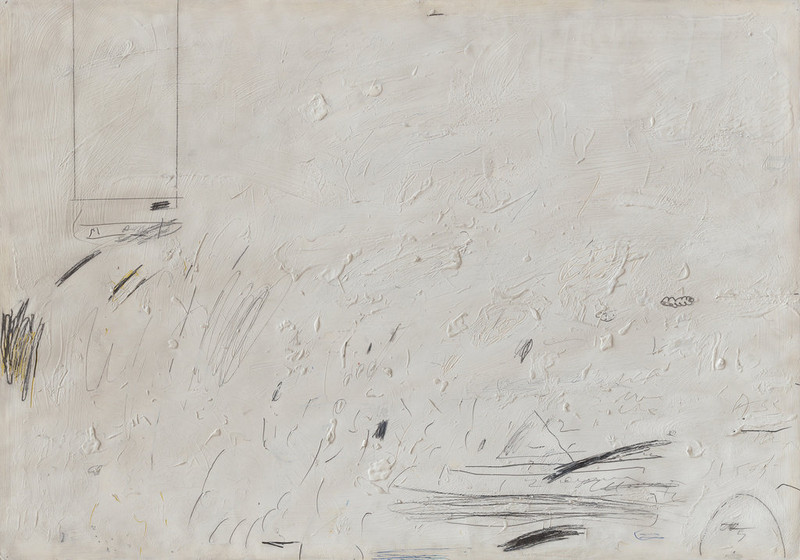 Galerie Karsten Greve Cologne is pleased to announce Cy Twombly – Malerei auf Papier [Painting on Paper], an exhibition honoring the various creative periods of Cy Twombly through a distinguished selection of works, with this being the fifteenth solo show since 1975 Galerie Karsten Greve dedicates to the truly exceptional artist.
While Cy Twombly was not unknown in Germany in the early 1980s, interest in his paintings, works on paper and sculptural works was more pronounced among a select group of visionary connoisseurs, before being em-braced by a wider audience.

As a contemporary of Robert Rauschenberg and Jasper Johns, Cy Twombly (1928 - 2011) is a key figure of the international avant-garde post Abstract Expressionism in New York. In the early 1950s, after studying at Black Mountain College, Twombly travels to North Africa and Europe, to Italy in particular, which was to become his adopted homeland after 1957. A maverick, leaving New York to settle in Rome. It is amidst the Mediterranean ambiance of Sperlonga, where Twombly rediscovers the liberties of the open image space and comes across new inspiration for his work. Italy’s rich cultural history acts as a catalyst for him to undertake an in-depth explora-tion of mythological themes, which he approaches with a highly differentiated visual articulation that incorpo-rates multiple techniques. Scenes and poets of Greek and Roman mythology ranging from Venus and Adonis to Sappho are not merely immortalised in his work titles. Numbers transform into dates, words into central marks of sentience, lines into sound, sound into tension, white into dissolution.


In the 1950s, Twombly chooses to almost exclusively focus on the interaction between signs and words, drawing and language. Colour takes on a more neutral role, in some cases acting as a means of covering up or obscuring signs, with white being a symbol of the pristine and subconscious. In his characteristic use of varied and differ-ent techniques, pencil, oil pastel, oil and wall paint all enter into an aesthetic and often tactile amalgamation with the paper surface. A calligraphic, spontaneous yet at the same time eminently focused sensibility is inherent in the frequently referenced graphic nature of his works on paper. It is only when considering the entirety of Cy Twombly’s life’s work that the spectator is able to fully comprehend the complexity of his semiotic system and ostensibly spontaneous gesture.

At times, it may even seem as though Cy Twombly intends to convey what arouses the mind of the artist –as though his ambition is to manifest the extensive knowledge which he bore within himself and continually en-gaged with, visibly and in a perceptible way. Even though his stylistic foundations are to found in Abstract Expressionism, Twombly does not so much concern himself with contemporary everyday-culture, as does Rauschenberg, with whom he shared a studio in New York for some time. Cy Twombly much rather investi-gates the possibilities of our past, of European pictorial tradition. He mediates between different stylistic cur-rents, consolidating them through poetry and intellectual context, a composite from which his personal style arises. Cy Twombly’s relationship with the line is central to his work. His unmistakable and instantaneously recognizable chirography is more handwriting than brushwork, its surface vibrating in a steady motion, account-ing for the singularity of Twombly’s oeuvre.

Born in Lexington, Virginia in 1928 as Edwin Parker Twombly Jr. and rising to worldwide notoriety as Cy Twombly, the artist attends Washington Lee University (1947-1949) as well as the legendary Black Mountain College in 1951, at a time when Franz Kline teaches as a professor. In 1952 Twombly is awarded a scholarship, enabling him to travel to Europe and North Africa. In 1959 Twombly moves to Rome, from where he continues to travel within Italy (Gaeta, Naples), to Greece and the US. He is invited to participate at the 1964 Venice Biennale for the first time, where he later displays his famous Lepanto-cycle. In 1977 he is represented at doc-umenta 6 in Kassel and receives the Rubens –Prize in 1987, with a retrospective, commencing in Zurich, dedi-cated to him. During his lifetime, major collections around the world such as the Menil Collection in Houston, the MoMa and Whitney Museum in New York, Tate in London and the Centre Pompidou in Paris have hon-oured his work with multiple retrospectives. Cy Twombly passed away in Rome in 2011. Today his works can be found in numerous public and private collections.