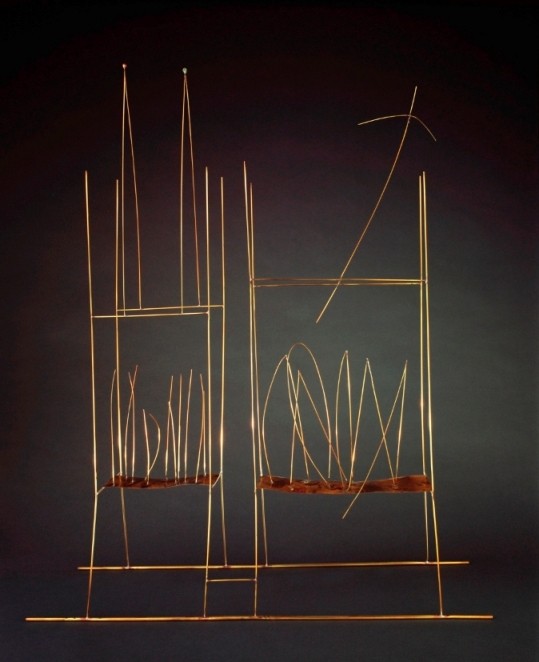 Fausto Melotti, Evocazione, 1975
Fausto Melotti is a pioneer of geometric abstraction in Italy. His reputation as an artist is based on the geometric abstract and simultaneously figurative-lyrical creations that impressively demonstrate the two decisive disciplines of his work: music and the art of engineering. In addition, he also left behind a large oeuvre of drawings as well as ceramics, as well as his teatrini, which through their distinctive style fuse with the imaginative wire sculptures to form a surprisingly coherent oeuvre. Galerei Karsten Greve devotes once again a comprehensive solo show to Fausto Melotti as a pioneer of an absolute art.

With ease, Melotti balances between various styles and movements, genres, and even disciplines, and his work is never appropriated by one single artistic formal vocabulary. Typical for this is his constant search for new materials and creative possibilities. Stone, bronze, clay and terracotta, brass, steel, or copper, also found objects – seemingly playfully, he arranges his art into mysteriously narrative objects, which in their construction are contrasted through numbers, measurements, proportions, and rational mechanics. Similar to his contemporary Lucio Fontana, who was a friend for many years, Melotti seeks to represent the essence of things, leaving out everything irrelevant, and his work he demonstrates the striving for simplicity in expression and in the treatment and choice of materials. Inspired by his inclusion in the circle of rationalist abstract artists around the Galleria del Milione in Milan from 1933-34 onwards, he gets closer to his concept of art: rigorously geometric constructions in the spirit of Platonic ideas. His leading notion is that of modulation, because, as Melotti explains, it “comes from module = rule = order”. These works as sculptures are all given numbers as titles and are reminiscent of music, mathematics, sculpture, and finally architecture. In terms of style, this revolutionary simplification of form looks ahead to the minimalism of the early 1960s.

For Melotti, the foundation of his work are his own drawings that explore all media and their possibilities. Thousands of pencil and pen drawings, pastels, and watercolours are evidence of their sacred significance as mediators between thought or idea and hand, and in this way communicate with various genres: first of all the ceramic vases, the free Figurines of terracotta, and their further development into miniature-like reliefs with figures and objects: the Teatrini. In the masterful fusion of the highest artistic standards and traditional shapes familiar from the decorative arts, Melotti displays a deep sensitivity for old ceramic techniques, which were especially strong in Italy. In this context, we also need to mention the over 500 plaster and terracotta bassorilievi, less flat reliefs than sculptured, sometimes collaged and painted wall objects, which he creates as an independent work group.

The density and weight of these traditional materials is contrasted from the 1950s onwards with a new sculptural work series that is linked to the geometric works of the 1930s. Inspired by Calder and Giacometti, Melotti, with constructivist clarity and poetic narrative power, takes these works to a delicate ease and lightness and spatial transparency. The elegantly delicate, skilfully structured formations made of thin wire soldered together reveal themselves as three-dimensional drawings in space, delicately ramified constructions into which Melotti frequently integrates painted textiles, colourful ribbons, metal webs, or small figurative sculptures. His statement, “My activity is a game, and when it succeeds, it is poetry”, is characteristic for his seemingly weightless sculptures that are positioned somewhere between constructed minimalism and mysteriously eloquent visual metaphors. Not influenced by the external trends that have been changing so swiftly in the international art world since the 1960s, Melotti created his distinctive late work, whose tension is the result of constant anti-poles: figuration and abstraction, imagination and ratio, poetry and reality, lightness and melancholia, are united to form an expansive work of Italian modernism.

Fausto Melotti was born in 1901 in Rovereto near Trent. His work received extensive attention relatively late, at the end of the 1960s, and since then have been honoured in numerous solo and group exhibitions. The first comprehensive retrospective in German-speaking countries was realised in 2000 by Institut Mathildenhöhe in Darmstadt and the Wilhelm Lehmbruck Museum in Duisburg. In 2010, the Kunsthalle Mannheim dedicated a comprehensive exhibition to him, which in the following year was shown at Kunstmueum Winterthur. Fausto Melotti died in 1986 in Milan.