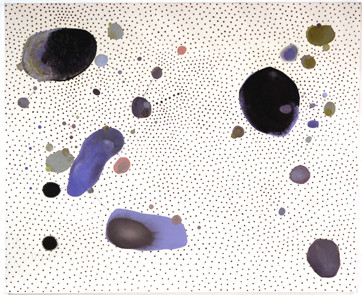 The visible Planet IV, 2007, Oil on canvas, 160 x 195 cm
Galerie Karsten Greve is pleased to announce the first solo show of James Brown at the Gallery rooms in Cologne, which will be on view from November 23, 2007 through January 19, 2008. Comprising paintings, a selection of drawings and ceramics most of James Browns recent works refer to an intensive examination with the Universe.

Since 1995, his entire work has been a prelude to the series Planets and Firmament, both of which will be shown at the gallery. The richness of the colorful textures in Planets is thus the result of a certain intimacy with colors acquired thanks to Color Studies. The subtly nuanced colorful masses gravitate in space organized through a myriad of points imperceptibly connected with pencil. The joint research of color and space was also called upon in 2002 with Ceramics, blue and lilac colored wall sculptures, which seem to float freely in the space they inhabit. The Planets cycle, born out of a fascination with the universe, was inspired by the English composer Gustav Holst (“The Planets Suite”, 1916) and by the structures of the American scientist and architect, Buckminster Fuller, who invented the geodesic dome. Hundreds of times James Brown listened to this music which provided him with a sensation of a journey in time and space. With works reaching up to three meters high and five meters long, the Planets come in several sequences and invite the viewer to explore the void whilst training the eye to browse these astronomical charts down to the most minimal detail in the depths of the work.
James Brown, who since the very beginning has been interested in nature and its organization as well as the place which man and culture occupy within it, is seized by the mysteries of the macrocosm in these recent works. Since the 80s, at which time he was in close relation with the emerging graffiti artists in New York, he drew his inspiration not from the commercial icons of contemporary society but rather from a distant “primitive” culture. Gradually, the strokes on the canvas blended with non pictorial elements in order to develop a type of collage: a variety of fabrics and found objects (mother-of-pearl buttons or golden moiré scarabs). These elements superimpose themselves on the canvas, whose horizontal or vertical weft govern the more or less abstract compositions. James Brown thus appropriates all sorts of natural or cultural elements, decorative motifs which come together on the painting. He plays on the different qualities of the materials, textures and colors.
Born in 1951in California, James Brown lives between New York, Paris and Mexico which he considers his primary residence. Very quickly, he is appreciated and recognized within the international artistic scene and has numerous important solo exhibitions in museums such as the Fisher Landau Center for Art (New York, 2006), at the MACO (Oaxaca, 2004), Galleria d’Arte Moderna e Contemporanea de San Marino (2003), at the Centre de la Gravure (La Louvière, 2002), at the Kunst-Station Sankt Peter (Cologne) and the Galleria civica di arte contemporanea (Trento, 1995).