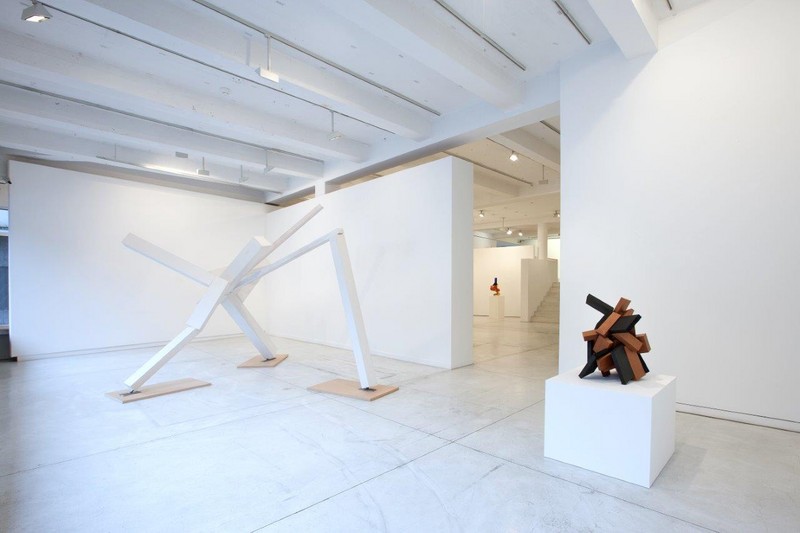 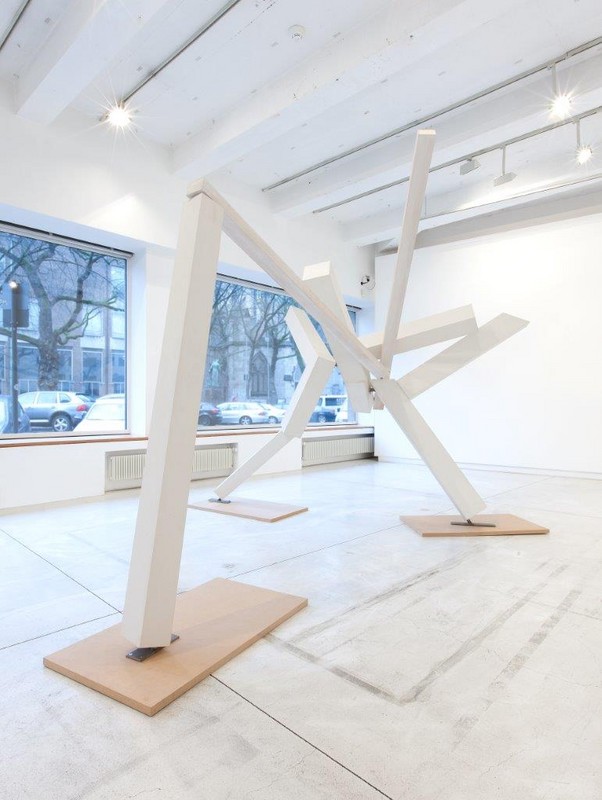 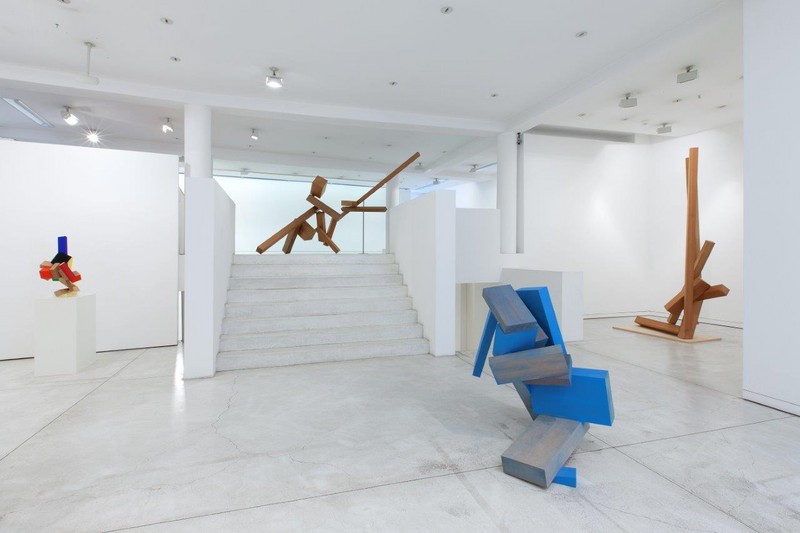 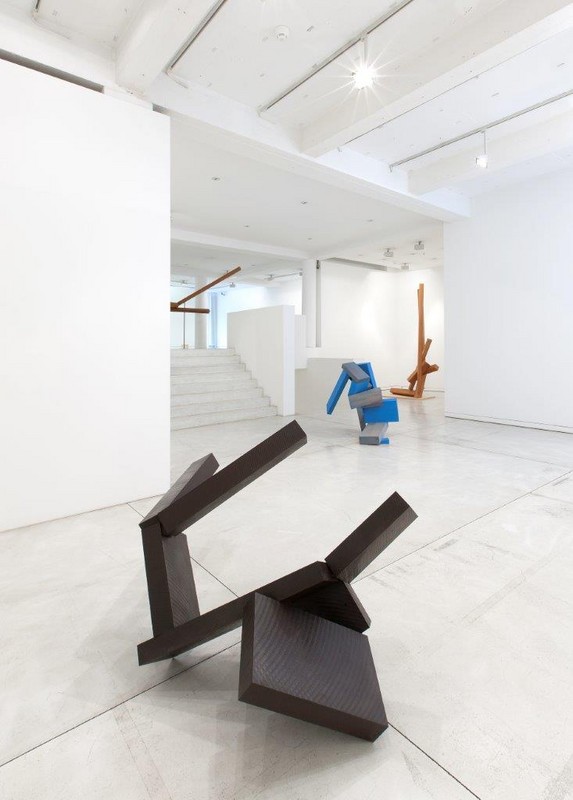 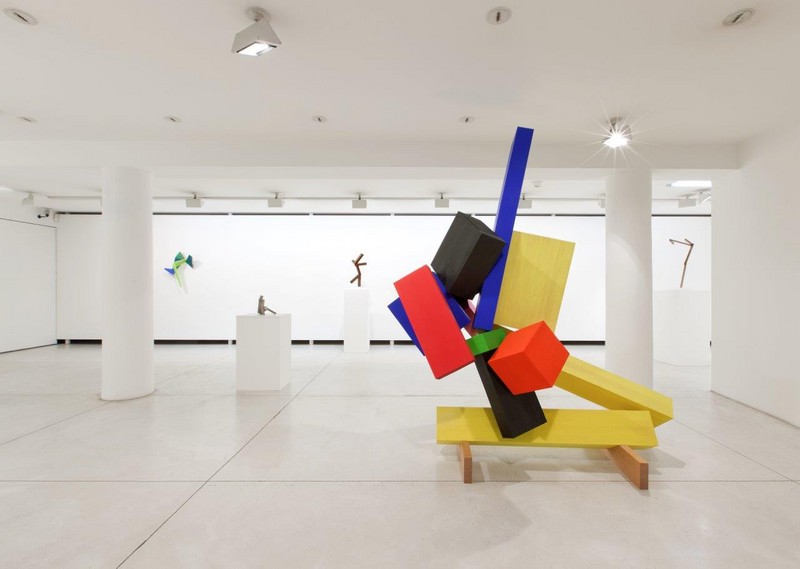 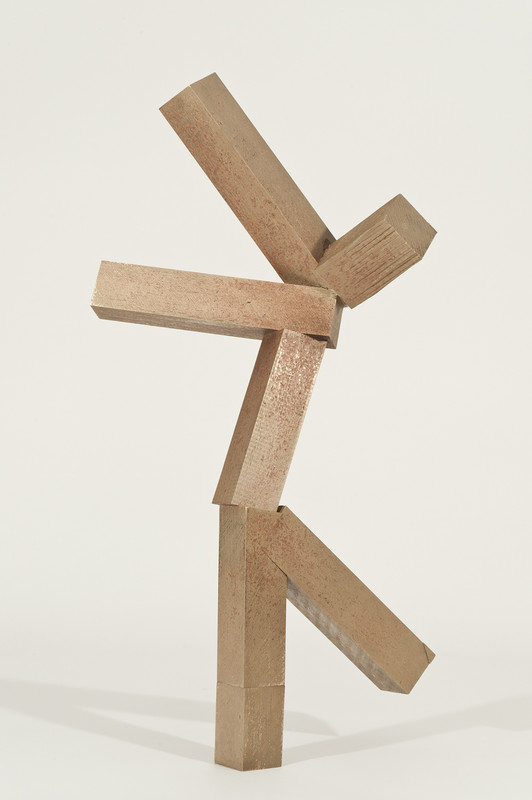 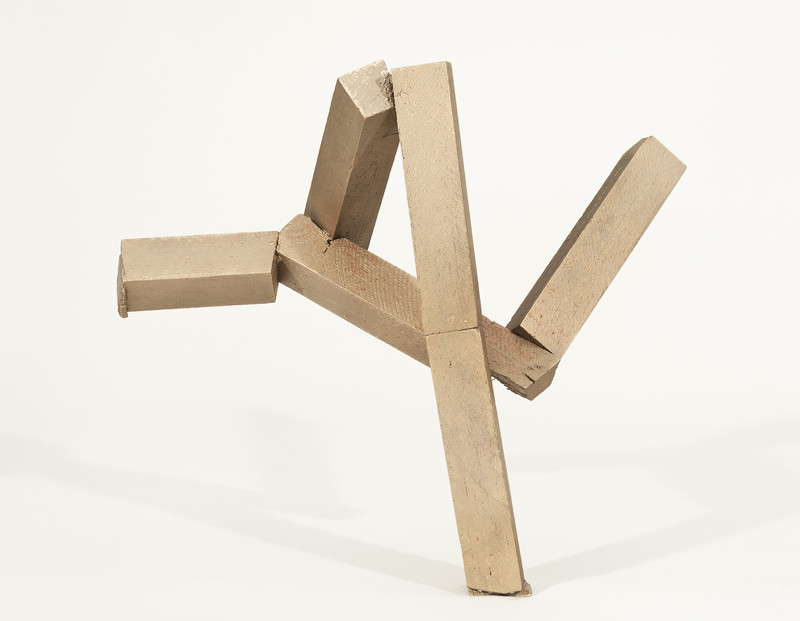 Joel Shapiro
Untitled, 2012, Bronze, Unique,
30,5 x 18,1 x 34,9 cm / 12 x 7 x 13 3/4 in,
Signature and date engraved underneath: SHAPIRO 2012
The Galerie Karsten Greve is pleased to dedicate a solo exhibition to the work of American sculptor Joel Shapiro, his seventh with the gallery. Shapiro is considered one of the most important sculptors of his generation: over the course of an artistic career that spans more than 40 years, he has created an oeuvre, which, through his stimulating use of scale and shape configurations, is unmistakable in character. Some works are composed of enormous cast bronze blocks or massive wooden beams that suggest architectural elements, while others, hanging from the wall or ceiling and made of various pieces of wood conjoined with wires, nails, and screws, are delicate and light in their toy-like format – the seemingly spontaneous results of sculptural bricolage. These fragile forms are occasionally reminiscent of the folded paper of origami objects.

Situated between the monumental and the miniature, Shapiro’s oeuvre encompasses compact, closed polygonal bodies as well as open structures, whose joined wooden slats or elongated bronze elements recall an unfinished framework or scaffold. While the former emanate a massive, voluminous presence, the latter seem more like vectorial intersections, markers that are pointing the way, plotting the three-dimensional space. In his new bronze works Shapiro also pursues his multifaceted experiments with structure and form, revealing the geometrical questions that revolve around size, proportional relationships and the dimensions of the space itself, with human scale providing the starting point for these examinations.

Configurations whose internal order and resulting proportionality manifest a certain similarity to the human figure often emerge, but these cannot be seen as true-to-life depictions. Nonetheless, certain seemingly acrobatic arrangements of individual elements frequently suggest human postures and poses, which are at the same time astonishingly expressive embodiments of particular emotional states.

Hovering on the borderline between abstraction and figuration, his sculptures possess a form without describing or implying a concrete object. Despite the way they hint at certain identifying characteristics, the sculptures remain for the most part without a distinct point of reference and are therefore open to multiple interpretations, which are always immediately produced by the personal perception of the viewer, deriving from both individual and collective experience. The immediate physical experience of Shapiro’s sculptures is therefore always an intensely psychological one, shaped by associations activated by subtle resonances, insinuating the existence of an everyday, universal form.

Shapiro’s conception of sculpture provides not only for the animation of his works through subjective content, but also for their dynamic impact through the viewer’s active movement in the room. In the spirit of minimalism, and corresponding to the fundamental laws of phenomenology, the sensual perception of the works arises directly from the positioning of the viewer’s own body in the space and the changes in perspective thereby determined.

The relationship of the individual sculptural elements to one another shifts so that the overall impression is variable and disintegrates into manifold viewpoints. Shapiro therefore resists the classical understanding of sculpture, which propagates the unity of the form and the hierarchical distinction of front and reverse sides in favour of non-hierarchical, dynamic, all-over structure.

In site-specific installations – such as exhibited at the Museum Ludwig in Cologne in 2011 – Shapiro allows three-dimensional elements to hover in a constructivist composition. The individual components of the sculpture are held together and pulled apart as though by centrifugal force. With these interventions he induces the space to open up beyond the boundaries of its architectural limitations: the planes of the ceiling, floor and walls provide no purchase and lapse in their roles as constants by which the viewer can orient himself.

With the disintegration of the tangible spatial parameters, Shapiro also defies the laws of physics – the law of gravity in particular. His forms often seem to be frozen in movement: they remain in a perpetual state of precarious balance. His parodic allusion to the representative freeze frame loosens up the statuesque solidness of the genre. Buoyantly and humorously, Shapiro plays perceptions of weight and balance, of flexibility and stability, off one another, pushing the diverse media of wood, plaster, and bronze to the boundaries of the physically possible.

Joel Shapiro was born in 1941 in New York City. He studied at New York University, graduating in 1964 (B.A) and in 1969 (M.A). His first solo exhibition was presented by the Paula Cooper Gallery in New York in 1970. Since then his work has been presented in over 150 one-man shows as well as numerous group exhibitions both in the U.S. and abroad. Solo exhibitions of Shapiro’s work have been held at museums including the Whitechapel Gallery in London (1980), the Whitney Museum of American Art in New York (1982), the Stedelijk Museum in Amsterdam (1985), the Walker Art Center in Minneapolis (along with the Nelson-Atkins Museum in Kansas City in 1995-6), the Metropolitan Museum of Art in New York (2001), and the Museum Ludwig in Cologne (2011). His work can be found in public collections worldwide, including such distinguished institutions as the Tate Gallery in London, the Musee National d’Art Moderne, Centre Georges Pompidou in Paris, and the Museum of Modern Art in New York. Prominent commissions include Loss and Regeneration for the United States Holocaust Memorial Museum in Washington D.C. and Now, which was commissioned by the Foundation for Art and Preservation in Embassies for the new U.S. Consulate in Guangzhou, China. Additionally, numerous large-scale works are on display in public spaces and parks internationally, including the Cologne Sculpture Park. Joel Shapiro was elected to the American Academy of Arts and Letters in 1998 and was awarded the Chevalier dans l’Ordre des Arts et des Lettres by the French Minister of Culture in 2005. In early 2015 he will receive the International Sculpture Center’s Lifetime Achievement in Contemporary Sculpture Award. Joel Shapiro lives and works in New York City.