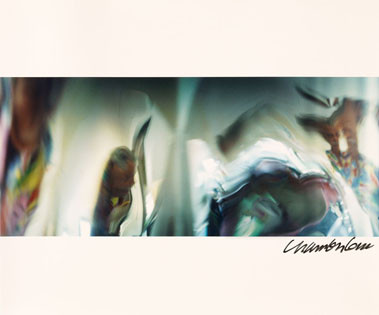 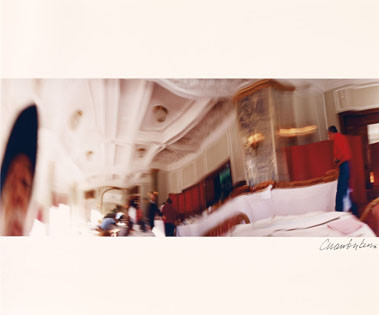 John Chamberlain: Carlton Hotel St. Moritz, 2001, Photo ed. 4/9.
Galerie Karsten Greve will dedicate to John Chamberlain, one of America's most important and dynamic sculptors, the first comprehensive exhibition of his photographs. Since the beginning of the 1960s, John Chamberlain creates sculptures by using mostly colourful painted automobile metal. His works range from small-scale and fragile objects to huge sculptures of great presence. In 1977 he begins to experiment with photography. Representing for over 30 years John Chamberlain Galerie Karsten Greve has shown his photographs with the sculptors since the 1980s. This exhibition will give an overview of the photography from 1989 through the present.

John Chamberlain is working with a wide-lux-camera catching an extreme wide angle of 150 to 360 degrees. The camera, originally developed for 19th-century rural and urban documentation, is equipped with a flexible objective. A broad, oblong format piece of film is exposed gradually. During the exposure, Chamberlain moves and turns the camera without even looking through the viewfinder. He takes the photos in streets and public places, in restaurants or in his studio and at home and develops them in his studio. Since he moves the camera whilst taking pictures, the images seem to show spaces in motion and the spectator looses his realistic orientation. The motifs dissolve into weightless forms, waving colours and lights. In this way, Chamberlain composes fantastic and unexpected visions, in which volumes and structures of the material world almost disappear. This ‘bending of the space’ constitutes a significant parallel to the formal principles of his sculptural œuvre.

Chamberlain's work does not follow a strict plan. His sculptures and photographs are the result of self-controlled and instinctive improvisation. Furthermore, none of his works is subject to a certain artistic movement. It remains absolutely unique in its way. Chamberlain always rejected to attach any specific association to his work as he is strictly working intuitively. Although, the titles sometimes suggest a personal or an autobiographical impact, they are not meant to be understood as links or regarding content. They might provide the work with a general idea, however, they remain combinations of words amusing the artist or being of any specific interest to him.

John Chamberlain was born in 1927 in Rochester, Indiana. He lives and works in Shelter Islands Heights, New York. His artistic activity is accompanied for more than forty years by numerous important exhibitions: In 1961 he takes part in the São Paolo Biennale and 1964 he is represented at the Venice Biennale. Several retrospectives follow, especially significant are those at the Guggenheim Museum in New York (1976) and at the Museum of Contemporary Art in Los Angeles (1986) followed by important exhibitions at the Kunsthalle, Baden-Baden (1991) and at the Stedelijk Museum, Amsterdam (1996). In 2012 the Guggenheim Museum in New York will open the first comprehensive retrospective: „John Chamberlain. Choices“ (February 24 through May 13, 2012).


For further information or requests regarding photographic material please contact us: galerie.greve@t-online.de
www.galerie-karsten-greve.com