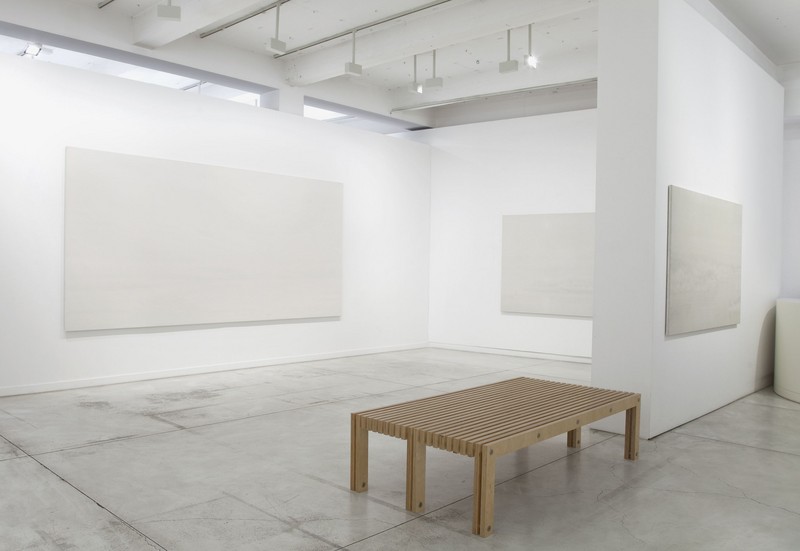 The initial encounter with the paintings created between 2000 and 2013 by Qiu Shihua, who was born in 1940 in Sichuan, is marked by an element of confusion, because instead of a recognizably abstract or figurative painting, what we see on the usually large canvasses is an apparent void. From the void of the extensive shades of white on white, which cover the natural hue of the unprimed canvas like a thin veil, only the outlines of contrasts and contours emerge very faintly. Shadings are condensed into hills and valleys, mountain ranges and rocky abysses, treetops, clouds, and waves. The sun sometimes appears as a point of light and helps us orient ourselves in the impenetrable layers of mist and fog. Delicate color modulations in the milky, semi-transparent basic hue interrupt the monochrome surface, and, when looked at for a long time, reveal themselves as delicately colored layers of pale grey, blue, pink, yellow. These are but minimal pointers to figuration.

The hardly noticeable interplay of light and shadow, which results in a delayed appearance or emergence of these landscapes, is a slowed-down process of image creation, and at the same time the extended engagement with the void becomes an intense exercise in looking, and indeed a spiritual experience. “Everything is flat and calm. ‘Form’ is unimportant. It is like being in meditation, when the entire cosmos looks like a white mist. Here, time and space seem to be annihilated. Human passions do not matter.” (George Chambers on Qiu Shihua) Because the landscape paintings by Qiu Shihua are not realistic depictions or the result of detailed observations of nature; rather, removed from concrete reality, they are the result of introspection and imagination giving rise to memories or premonitions.


Qiu regards essential elements of composition, and coordinates, as negligible: “For me north, south, east or west count for nothing, nor do red, yellow or blue, and certainly not past, present or future. With endless emptiness in the heart there is neither coming nor going; they are one and the same. So are my works too: simple and pale, calm and empty. All being and non-being is hidden in them, completely self-contained. In the zero condition the original countenance of the soul reveals itself.” In their reduction to mere allusions and hints, Qiu Shihua’s paintings turn out to be a kind of projection surface for individual impressions that the beholder has to contribute to and thus, as it were, animate the painting. Only then can they be experienced as landscapes of the soul, as atmospheric paintings. In Qiu’s view, the process of beholding is reciprocal: while the beholder looks at the painting, “it looks back.” When the beholder spends time in front of the painting, there is a transfer of energy between painting and beholder, an “exchange of cosmic energy.” What is essential for these paintings, steeped in the spirit of Taoist teaching, is not the what, but the how. The dialogic dynamics of interactive reception opens up possibilities of change, both on the level of the painting as well as on the level of consciousness.

Qiu Shihua’s art of slowness follows a concept where production and reception, becoming and vanishing all coincide. What is important is the path, not the cause or the goal. Qiu remarks that the creation of a work of art takes place in the productive transition from “nothingness” to “somethingness” and back to nothingness. The completed creation, the finished product he rejects as a static concept, advocating instead a continuous processuality without a final completion. As a painter, Qiu claims no authority: he does not control the painting; rather, the painting guides him and points the way.

Thus Qiu Shihua keen on applying the Taoist maxim “action without action” to painting. The painting, the fleeting apparition, emerges in the contested field between seeming and being, in the interspace of the contrasts of light and shadow. Central themes of Taoism are anchored in the landscape, including in the binary pairs firm-liquid, high-low. Traditional Chinese landscape painting is based on the Taoist principle of holism and the union of opposites. The Chinese term for landscape, shan-shui, is a combination of shan (mountain) and shui (water), and in this combination, the complementary unity of both natural situations is expressed. A landscape is understood as movement between two poles, as interplay between above and below, vertical and horizontal, hard and soft, opaque and transparent, etc.

Taoism recognizes existence in transformation, in the transitions that elude description and observation. Just as Laozi, the founder of Taoism, does not try to form an image of the inexpressible, of that which eludes human understanding, Marcel Duchamp also observes “a division, an interval, or an imperceptible interspace, a distance or distinction that is not discernable, but can only be experienced through the imagination”. He coins the term inframince as “the possible that includes the becoming – the transition from one to the other takes place in the inframince”—this is how he mirrors Qiu Shihua’s world view and artistic approach.

Qiu Shihua was born in 1940 in Sichuan, China. He started painting without any prior artistic training. In 1962, he finished his degree in oil painting at the Xi’an Academy of Art. At a time when the People’s Republic of China was rather closed off to the West and advocated socialist realism as propaganda art, Qiu Shihua started to do nature sketches and paintings. During the Cultural Revolution, he worked as a poster painter for a cinema in Tongchuan. He stopped doing this in 1984, and visited Europe as well as the Gobi desert. These experiences caused a radical change in his artistic production, which from that point onwards was also heavily influenced by his intense engagement with Taoism. As part of this, Qiu Shihua turned away from painting direct representations of landscapes, devoting himself instead to representing states of the soul.


Qiu Shihua’s work is today well known internationally, and has been shown numerous times in exhibitions around the world. Among the numerous group exhibitions in which his work was included were the traveling exhibition Mahjong - Kunstmuseum Bern (2005), Hamburger Kunsthalle (2006), and Museum der Moderne Salzburg (2007); as well as The Sublime is Now at Franz Gertsch Museum, Burgdorf (2006) and Shanshui at Kunstmuseum Luzern (2011). His works were shown at the Biennales of São Paulo (1996), Venice, (1999) and Shanghai (2004). In 2012, Hamburger Bahnhof (Berlin) and Pfalzgalerie (Kaiserslautern) devoted comprehensive solo exhibitions to Qiu Shihua. Qui Shihua lives and works in Beijing and Shenzhen, China.