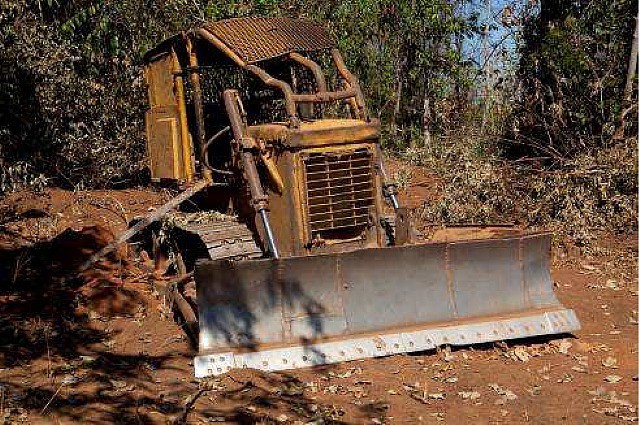 Sergio Vega (born in 1959 in Buenos Aires) has been working since 1995 on a project titled El Paraíso en el Nuevo Mundo, based on a theory by Antonio de Leon Pinelo from the 17th century (published 1656), according to which the Garden of Eden is to be found in South America. Using various media, Vega reinterprets Pinelo’s depiction of paradise with a great deal of subtle humour. Past and present, the overall theme of this year’s documenta, are always present in Vega’s works and form the reference system of his research.
Galerie Karsten Greve is showing four groups of photographs from El Paraíso en el Nuevo Mundo. Mist in the Forest (2010) and Inside the Forest (1996-2011) engage with the iconography of nature in the past and present. The photographs of the rainforest in the mist and fog remind the beholder Romantic landscape paintings, both in terms of the intimate format as well as the representation of primeval nature in its sublime state of creation. Thus Vega calls this also the Sublime Series. In the large-format photographs Inside the Forest, on the other hand, Vega depicts the rainforest from the perspective of baroque painting: The chiaroscuro of Caravaggio, the voluptuousness of Rubens' forms, or light reflecting on vegetation as in Vermeer: the earthly paradise of the 17th century.
The photographs of the series Roads of Amazonia and Entropy, Houses, Places and Objects draw attention to human interventions in the natural environment and the creation of social conditions. The style of some of the houses for example, is a North American import started by Henry Ford's rubber tree plantations in 1927. Today, however, the standard of living of the middle class in the Amazonian region relies in the clearance of the rainforest, which in Vega’s work is represented by the image of the bulldozer. In 4 steps of a rooster manifesto Vega constructs a photo essay narrative to reflect on the current status of art finding its resurgence in the impoverish material conditions of Brazil. A rooster moves about in a heap of scrap metal, abandoned tools and appliances, an environment resembling an odd accumulation of Duchampian readymades. Vega interprets the four steps taken by the rooster in that chaotic site as progressive stages in a symbolic revival of the surrealist manifesto. The series of photographs are supplemented by Vega’s videos The Missing Tail and The Deer (Not the Iguana), chosen by Tue Greenfort for his section Worldly House at this year’s dOCUMENTA 13.
The works are part of a complex, critical multi-media exploration of historical and contemporary methods of representation, in which the modus operandi of colonialist ideology in the development of culture and social circumstances is examined. Vega roguishly combines theory, empiricism and mordant criticism of power and society and finally creates, in art, a paradise in which sensory stimulus and critical discourse come together.

Born in Buenos Aires in 1959, Sergio Vega lives and works in Gainesville, Florida. He teaches photography at the University of Florida. He participated in numerous international exhibitions, among them the 51st Venice Biennale, the 5th Biennale de Lyon, the 3rd Moscow Biennale, the 2nd Kwangju Biennale and the 1st Yokohama Triennale.
www.galerie-karsten-greve.com