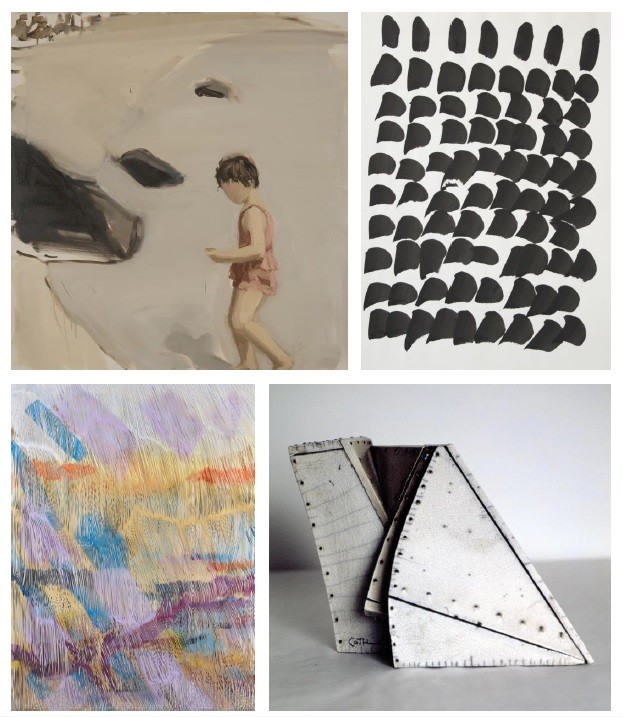 Galerie Karsten Greve is pleased to announce its Summer Show, presenting a selection of works by international artists of the gallery’s programme - spanning over three generations - in a group exhibition featuring sculpture, photography, figurative as well as abstract painting and works on paper.

The colourful canvases of Scottish-born Georgia Russell (*1974), whose studio is based just outside of Paris, are evocative of fields wavering in forceful winds. Known for transforming sheets of paper, photographs or even entire books into landscapes and abstract objects using a surgical knife, the artist’s latest works are composed of multilayered, porous structures, made from acrylic coated canvases held in place by transparent filaments. For Pierrette Bloch (*1928) paper, occasionally complemented by softboard sheets, also constitutes a preferred medium to work with. In black and white colour on black and white surfaces blots, lines and calligraphic insinuations emerge, while black cord, lace and string transmute into scribbled loops projecting out into the room. In stark contrast stand the almost completely white works of Chinese painter Qiu Shihua (*1940), initially thought to be raw, void canvases, that upon closer inspection gradually reveal traces of colour, hinting at the woodlands and foggy panoramas they depict. The on the other hand ostensibly more accessible maritime veduta of South Italian photographer Mimmo Jodice (*1934), may, when observed intently, just turn out to be a scintillating Fata Morgana.

With her delicate and in part architectural constructions, the Northern Irish Claire Morgan (*1980) explores the antagonistic relationship between nature and civilization. The motif of evanescence takes on a prominent role in her meticulously configured, elegant and poetic sculptures, composed of taxidermied animals encapsulated by geometric formations of dandelion seeds and fruit flies strung up on thin threads of nylon.

The levity of the transparent, oversized beaded necklaces of French artist Jean-Michel Othoniel (*1964) is deceptive: despite their playful appearance – bearing somewhat of a resemblance to floating drops of water akin to the soft watercolour dots in Othoniel’s works on paper – the massive glass orbs consist of heavy materials in a sophisticatedly conceived architectural arrangement.

In his schematic yet unmitigated portraits and landscapes Gideon Rubin (*1973) captures the essence of a trip to the sea and of memories of days spent together in the countryside. The Israeli-born artist bases his works on photographs, mostly from the 1920s and wartime era, challenging the spectator’s imagination by omitting any facial features and placing an emphasis on void spaces within the scenery.
Equally elusive yet in a different way are the figurative sculptures and drawings of Berlin-based Japanese artist Leiko Ikemura (*1951), in which hybridized creatures between human and beast and a mystical state amid dream and reality coalesce in landscapes and figurines. The small-scale paintings on wood and copper of Norbert Prangenberg (1949-2012), known as both a painter and sculptor, are – albeit being abstract – largely inspired by nature. Intensely coloured and sparkling like gems and blossoms, nondescript, vibrant objects beam from an earthy ground, the horizon only vaguely perceptible.

Of a very different cast are the almost Cubist objects by American sculptor Catherine Lee (*1950), which - bolted together with nails and glazed in Raku-technique – are reminiscent of precious stones and monoliths from a bygone age. Hovering diamond shapes and fragmented lines also reappear as distilled, crystalline instants in Paco Knöller’s (*1950) new Aufwachraum series of works, in which a painters knife skims the thick oil pastel coat of their top layer, revealing the subcutaneous enamel covering the wooden base – the relationship between colour and line being of central importance to the artist. The innate vivacity and volume of Gotthard Graubner’s (1930-2013) early works on paper allude to his Farbraumkörper series. Finite in its forensic search for traces, yet a recommencement in the sphere of abstraction is the work of Venezuelan artist Raúl Illarramendi (*1982). On a quest for banal marks and remnants of fingerprints, rain or other elements in the street, on vehicles, walls, doors and windows, Illarramendi transmits the traces onto his works by reconstructing the marks in the spaces left bare by coloured pencil on the gouache primed basis, in a sense drawing in reverse.

Regardless of the vast divergences in their contexts and techniques, the works by the exhibited artist all share one commonality: a lack of spatial fixture that allows for individual elements, lines and shapes to defy gravity as they float in aerial suspension while a nondescript fluidity and otherworldly atmosphere is inherent in the representational works. Gazing at summer horizons and shores that sway in steady motion may bring with it either blithe or melancholy sensations – however what it does not carry is a sense of the ordinary or mundane.