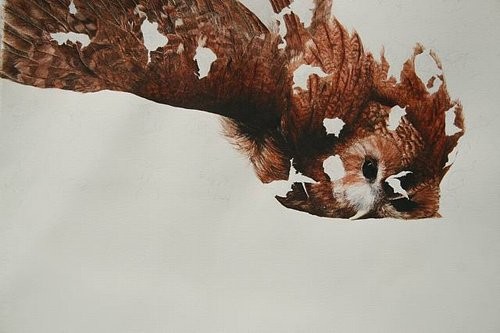 The Karsten Greve gallery is pleased to announce the first solo show in France dedicated to Claire Morgan, the young Irish artist born in 1980 in Belfast, which will include an important set of sculpture-installations specially created for this occasion.

Claire Morgan’s work is rooted in the futile desire we have to quantify life and death. Human beings like everything else in the natural world are fragile, individual parts of something much bigger. She explores the human condition and questions the real value or impact an individual might have or be able to have. Struggling with these questions, Claire Morgan’s work is a personal attempt to evaluate the complexity, beauty, horror and futility of being both human and animal.

These new works examine the small, quiet discoveries that occur between the extremes of birth and death, encounters or chance meetings between animals and plants and us humans and our waste. They explore situations where nature interacts with that which challenges it (us and our by-products). In the exhibition, a barn owl and thousands of airborne seeds sit alongside fragments of waste plastic and cockroaches. “For me it illustrates a moment where perfection and disaster might merge. I am trying to convey that we are animals, though we try to pretend we are not. Exploring the physicality of animals, death, and illusions of permanence in the work is my way of trying to come to terms with these things myself. For me the animals in my work make reference to how we function, live and suffer within the environments we have created for ourselves.”

All her works include ambivalence; beauty and grace contrast with the horror of collapse and death, whilst suspended installations reveal a state between movement and stillness. The difference between ‘good’ and ‘bad’ remains unclear; the animals are small and relatively insignificant, yet beautiful. On the other hand, the imposing size and geometry of the forms that surround or contain them demand attention and at first glance also appear to possess a sort of perfection. On a closer inspection, there are human errors and a lack of strength or solid structure. The constructions are made up of thousands of insignificant and individually worthless fragments that are unconnected. Claire Morgan tries to achieve a form of emotion or beauty made from ordinary materials and objects. In her compositons, the combination of colours, scale, geometry, organic and inorganic are all important.

Independent from the installations and considered by the artist as works on their own, the exhibition will also include a selection of works on paper. For each new sculpture, she carries out the taxidermy on a piece of watercolour paper, onto which the fluids of the animal spill and on which marks are made relating to the anatomical measurements of the specimen prior to and after skinning. Also present after the taxidermy are some small cuts from scalpels and residues of any chemicals used. This becomes the ‘primed’ canvas onto which she draws the animal in question within the sculptural scenario she has imagined for it. The anatomical precision alongside the messiness of the real death of the animal, demands attention from the artist, she gladly indulges in the futility of trying to achieve a degree of perfection on an already soiled page.

Claire Morgan has pursued a career as a visual artist since 2003. Her works have been exhibited regularly in Belfast and London as well as in Europe; she has benefited from several residences and commissions in Great Britain and has participated in numerous international group exhibitions.
www.galerie-karsten-greve.com