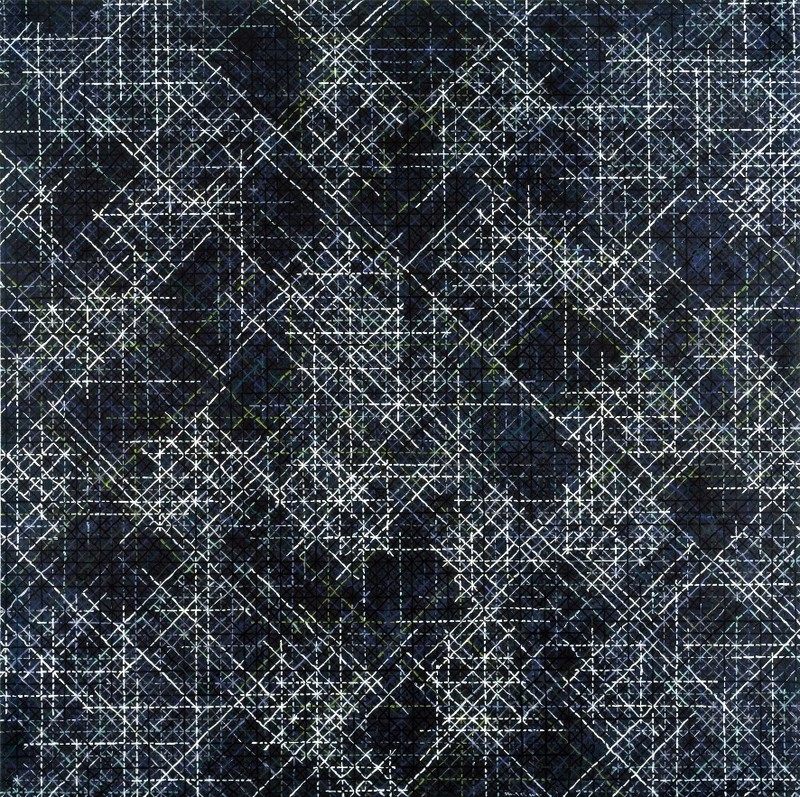 Galerie Karsten Greve is pleased to announce the exhibition Scintillement dedicated to the artist Ding Yi, one of the unequivocal protagonists of contemporary Chinese art. Ding Yi's work reflects a voluntary detachment from all iconographic and figurative reference. Since the beginning of his practice, the artist has moved away from Chinese tradition and the academy, choosing abstraction instead. Whether in paintings or drawings, the works of Ding Yi are made through the repetition of the same module manually applied over the entire surface. The line that is omnipresent and reproduced everywhere is the + sign, which keeps reappearing, evoking a kind of mapping where possible routes are multiple and when looked at closely, infinite.

Ding Yi conceives his works as devoid of any intrinsic meaning, the artist's purpose being to "record the traces left by the very rapid urban development that characterizes today's world, while maintaining a neutral position." By-passing any judgment, Ding Yi transposes all his perceptions onto canvas or paper. The vibration and insomnia of cities, notably of Shanghai where he lives, are rendered through the accumulation and configuration of juxtaposed signs. Like a 21st century pointillist, the careful and constant application of the technique reveals an overview where the delirium of contemporary productivity is evoked by vivid colours, often inspired by the neon signs illuminating the city, and the density of the composition. The proliferation of square crosses, a sign that is pure and free of any association of meaning, creates a rhythm of expansion and contraction that becomes a metaphor for the frenzy of urban life, dominated by the great tyrant of our era, which is time.

At the beginning of his production between 1980 and 1990, Ding Yi created works characterized by a technical mannerism where formal precision made it possible to minimize any personal dimension. Since 1990 the work of the artist has been freer. Still omnipresent but no longer drawn using a ruler, the cross was gradually tilted until it evolved into a new sign, different yet still the same. It is thus that the + became an x. From that time on, the surfaces of the works show lines on the bias that enrich the space of the paintings or drawings. Developing obliquely, the configuration of the signs also softens the colour tones, offset by the gradation. In 1997 the artist began to use printed fabric, most often the tartans typical of Scottish kilts. By superimposing geometric shapes, this new experiment made it possible to later accentuate the frame of the works.

Repetition is a fundamental component of the work of Ding Yi. More than obsessive, the gesture of the artist should be considered as a precise and patient research, a proof of steadfastness and order despite the chaos of the metropolis. In this sense, the repetition of the cross is not a simple application of the rule, but a cure for widespread confusion, which fortunately, is not radical. The eternal evocation of the same sign is also at the origin of the wide variety of Ding Yi's works. Though the title is always the same, Appearances of Crosses followed by the year it was done and the reference number of each work as well as a "B" when it comes to drawings, the incalculable possibilities of the compositions and the variety of colours used allows the artist to never repeat himself, while remaining faithful to the module.
www.galerie-karsten-greve.com