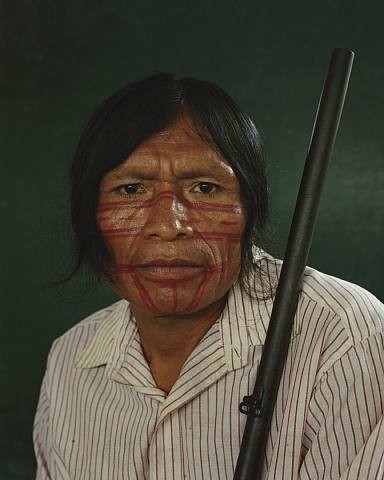 The Karsten Greve Gallery is pleased to announce its programming of “EChO wanted”, a group exhibition on the theme of the environment that will take place from May 17th to July 12th. This exhibition was born of an intimate preoccupation and will to react to the themes of pollution and the degradation of our environment, but also of a desire to make known the work of a certain number of artists who will be exhibiting for the first time in France and at the Karsten Greve Gallery.
International concern for the problems linked to the environment has grown considerably. And, as with all major changes throughout history, art forms have accompanied this evolution. Artists seize hold of these questions and illustrate the new relationships society has with nature. Ever-changing artistic scenes develop and strive to stimulate our collective conscience. It is now the Karsten Greve Gallery’s turn to get involved by inviting eight artists, from very different backgrounds, to come and show their work in Paris. This exhibition will also serve as a platform for international organizations like Global Ocean, Adventure Ecology and OrphanAid Africa and will continue on to our galleries in Germany and Switzerland.
The exhibition is presenting works in a broad range of mediums ranging from photography and drawing to sculpture and video. It will also include works that have been conceived specifically for the exhibition that are relevant to the installation.
The artistic practices of Claire Morgan reveal a strong interest in whatever touches upon the organic and in natural processes, illustrated in her sculptural installations. The artist often has recourse to the power of objects and to scenarios that simultaneously illustrate acute beauty and horror.
“My work is concentrated on the apparently opposed points or aspects of our world that seem to fuse or at least are part of a whole, on the beautiful and the repugnant, the synthetic and the living, on shapes that are organic and geometric.” Through a monumental yet slender installation, Claire Morgan addresses here the problem of the danger certain species of animals are being subject to in swallowing cast off plastics.
The series of missions of Adventure Ecology aims at raising awareness of environmental problems around the world through creation. In 2007, David de Rothschild, founder of Adventure Ecology, invited several artists to become involved in a mission called Toxico, among who were the director Dustin Lynn, the photographers Oliver Chanarin & Adam Broomberg and the artist Gabriel Orozco. Once this creative team was brought together, they went off on a mission to the lands of Ecuador. During this mission, Dustin Lynn made a film that captured the extraordinary images of the expedition. The quality of the light, which is Dustin Lynn’s signature, makes this film an exceptionally rich visual experience. Among other things, he gives us a glimpse of the work of the different team members and their experiences in a natural setting that has been dramatically polluted through oil production.
The works that were created at this time by each of the artists on different mediums will be on display, notably a collection of works on paper by Gabriel Orozco and the photographs of Oliver Chanarin & Adam Broomberg.
During her first voyage to Greenland in 1986, Lynn Davis made a decisive change in her work by definitively abandoning the representation of human forms for landscapes. She has photographed icebergs in monumental formats several times since then and the works presented today come from her last trip there in 2005. During this trip she was able to see the changes in the ice floes wrought by global warming.
Sergio Vega’s artistic projects involve a range of mediums including text, photographs, videos, objects, dioramas, and installations. Sergio Vega mischievously combines theory, empirical experience and a cutting criticism of power and of society in his work. He thus seeks to constantly re-examine and explore a “paradise” in which sensorial stimulation and critical discourse are merged. This series of photographs, of great visual elegance, also underline the negative impact man has on nature.
Paulo Paes has developed a plastic arts project entitled “Physalie”, which is defined by the artist as a cross between random biological processes and planned structures. He introduces recyclable plastic bottles or other materials into a natural milieu, very often the sea, which constitute a point of attraction and fixation for marine life. He studies the development of living organisms that set up home in these bottles with the help of scientists. The colonisation process of these structures transforms them into mutant sculptures that are then put on display.
In his installation “Acid Rain” Bright Ugochukwu Eke has created water droplets with small plastic bags that are usually used to sell drinking water containing a blackish industrial product that evokes acid rain. Bright Eke is emphasizing the complete disregard for the environment by both the authorities and citizens who throw these little bags away without thinking and so pollute the world around them. With this work the artist is underlining the fascination water exercises over him, its indispensable role in our existence and our environment, while evoking its purifying properties.
www.galerie-karsten-greve.com