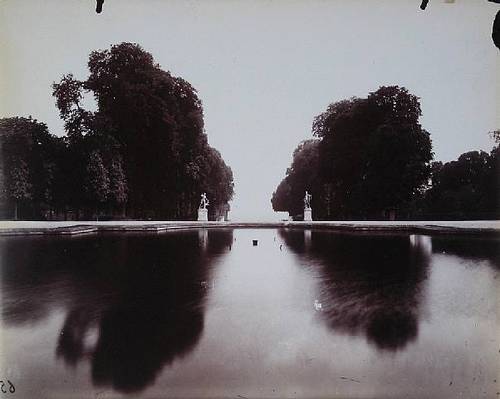 A major event in the photography programming of the Karsten Greve Gallery is the Eugène Atget exhibition that groups 49 prints from the provenance of The Museum of Modern Art in New York, representative of the photographer’s most emblematic series.
A professional photographer from the 1890’s right up until his death, Atget supplied documents for historians, craftsmen, painters and illustrators. He worked mainly in and around Paris (Versailles, Saint-Cloud, Meudon) and took roughly 10,000 original images in all. From 1897, he systematically photographed Paris by devoting himself on the one hand to urban life, from which he created the Picturesque Paris series (markets, street scenes, and the lifestyles of old Paris), and on the other to topographical views and architectural details that he grouped together in the Old Paris series. He next concentrated on the decorative arts with Art in old Paris (balconies, ironwork, signs), and then undertook a series on the Surroundings of the Capital. The sublime selection presented at the gallery likewise includes a collection of landscapes, parks and gardens.
Atget’s approach to his profession is unique and innovative. Throughout his career he experimented with the limits of photography to transform the evidence of reality into visual poetry, as the subtle variations on different views of the same subject reveal. As an observer of the city in transformation, Atget often took his photos early in the morning in deserted streets and knew how to give an enigmatic density to architecture and objects. The unaffected quality of his photographs dramatise the real in coexistence with the imaginary. Between documentary tradition and modern experimentation, Eugène Atget’s photographs brilliantly express “the passage from the world of Balzac to the world of Proust, from Baudelaire to Breton, and from Corot to Cézanne” remarks Peter Galassi, head curator for the photography department of the MoMA.
As of 1898, Atget began to sell prints and thematic albums of his work to French public institutions (the Musée Carnavalet and Bibliothèque Nationale notably) without any notion of authorship. After his death in 1927, the Art and History Photographic Archives acquired some of his negatives while the American photographer Berenice Abbott bought what remained in his studio, subsequently bequeathing her collection to the MoMA (1968). Berenice Abbott brought the work of Atget to the attention of the intellectual and artistic milieu in the United States, giving his work acceptance of an aesthetic order which emerged only later in France.
At the end of the 1920’s and the beginning of the 1930’s, Atget’s work became an example of the creative power of photography, propelled from its documentary past into its artistic future. Every major photographer in the half century that followed his death was aware of Atget’s influence. Historians rank him among the greatest masters of photography and many believe that his artistic output has never been rivalled.
The ensemble of prints presented at the gallery is available for purchase. The exhibition coincides with two important events: the art fair “Paris Photo” and “the Month of photography in Paris”.