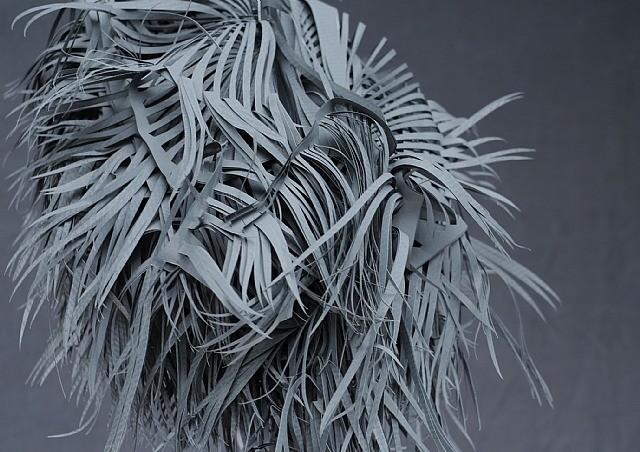 Having presented Georgia Russell’s work in group shows, the Karsten Greve Gallery is pleased to announce its first private showing of this young Scottish artist (born in 1974), which includes a collection of works that have been conceived especially for this occasion. The artist has focused especially on the concept of repetition and the energy this results in. Distancing herself from figuration and coloration, she emphasizes shape and quick, lively gestures “in the style of Pollock”.

Russell gives a new identity to the objects she uses, most often old books, musical scores and photographs. She senses a certain rhythm and energy, a rich but difficult to perceive life, in the sequence of the notes played or letters read and in the observation of the paper used, touched, leafed through, and folded. She wants to make this kind of impulse for information and time passed apprehensible, exploring the anatomy of the found objects like a doctor of the nervous or vein systems, exposing them by spontaneous gestures of the medical scalpel, creating flamboyant networks and a tactile surface. She chooses them for the evocative power they conceal and dissects and transforms them like a surgeon. At the moment of cutting, there is a sensation of possession and dispossession of the internal space and of the image, of the book, like a proof of existence and at the same time, of its fragility.

Both objects of abstraction and images, they thus become a link between the present and the past, conserving at times original elements such as the title of a book or motifs that have been reduced from the principal characteristics as the only reference to the past. They are rebuilt to form light, extraverted sculptures and effervescent landscapes, vibrant with emotion.