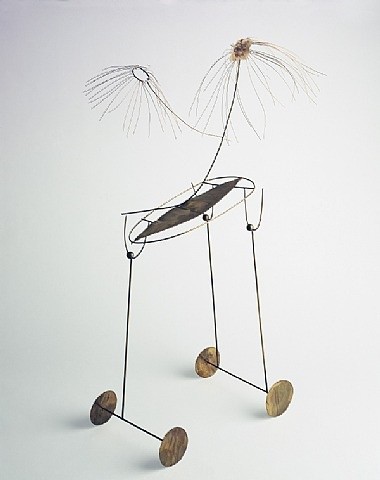 Fausto Melotti is among those spirits in the history of art and thought who does not allow themselves to be defined by a specific category such as “sculptor” or “poet”. An engineer by training and artist by vocation, Melotti spans a historic period where, in the Italy of industrial innovations and memories of more or less recent wars, abstraction would only be recognized a few decades after its earliest onset. His sculpture, which emerges from the void rather than subtracting from the whole, is the manifest of a refinement that avoids any cerebral gravity and is intended to be explicitly spiritual.

The twentieth century was a year old when Melotti was born near Trento in northern Italy. After spending several years in Florence, Fausto Melotti moved to Milan where he obtained his diploma in electrical engineering in 1924. Four years later he enrolled in the Brera Academy, which still remains today the absolute reference for artistic training in the region. During these formative years in terms of training, which were a prelude to unprecedented creative development, Fausto Melotti made the acquaintance of two personalities who would mark his life: the sculptor Adolfo Wildt whose atelier he frequented in Brera and Lucio Fontana, his classmate with whom he remained bound by a deep friendship. It was in Wildt’s classes that Melotti was initiated into the search for pure form, strict control in the production of the work and the abandonment of any accident.

Melotti’s first solo exhibition took place in 1935. At this time the artist was 34 years old and his works aroused no interest – neither that of culture or of the market. His sculptures were perceived as too angular, cutting perhaps, but without pathos. In his review of the exhibition the futurist Carlo Carrà said of Melotti’s work “it is intelligent but it is not sculpture”. Following this failure Melotti put aside artistic production and devoted himself to teaching. It was in the 60s, when the fashion for abstraction was stronger and more solid, that the artist applied himself again to creations between sculpture and painting.

Fausto Melotti is dedicated to finding a geometry that puts aside any figurative representation, aiming rather to express a pure love of the material, whether bronze or ceramic. The artist has always sought a perfect balance: he projects himself into the Platonic universe, giving life to a hyperuranio in bronze, copper or metal. Melotti is also a professional pianist and seems to apply musical standards to his sculptures. The compositions he completes evoke a harmony made of variations, intervals and liaisons. It is not then a coincidence that the titles of his works are inspired by musical vocabulary. The works Piccola sequenza, Contrappunto X and more explicitly Scala Musicale (musical scale) are indeed the visual representation of a rhythmic sound shaped by the artist. This intangible component plays a key role in the works of Melotti as they are floating works, of fragile appearance but with solid metaphysical roots.

The first Teatrini (small theaters) date back 40 years. These are works that claim an expressive practice hitherto considered of the order of applied art or minor art. In these stage settings and evocations of interior architecture, space is both relative and infinite, and is inhabited by ephemeral presences. They are poetic narratives consisting of the most diverse materials such as copper, scraps of fabric or chains. They are all memories of the soul that we must look at closely. Melotti thus creates a world where there is no preferred material for art and where allegory is the only possible word. There is nothing scary about these small anthropomorphic characters; Melotti’s mute faces are not intended to raise the depths of the unconscious and are only figures evoking a moment that never happened.

Together with geometric sculptures and Teatrini the exhibition features works on paper that are often studies for sculptures. Almost all untitled, these works project the observer into a world where reality is just a memory and is superfluous. The drawings and paintings on paper, of different hues but always supple, do not fail to reveal the foundation of the support, which is a void that is not perceived as a lack but rather as a space in which the author invites us to fill time and ideas.
www.galerie-karsten-greve.com