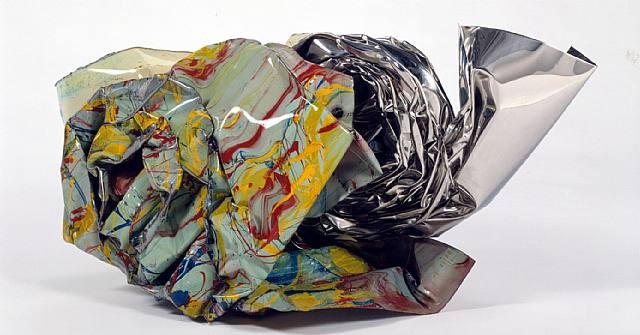 The year 2007 honors John Chamberlain in France: The Karsten Greve Gallery is dedicating an important exhibition to him, the Orsay Museum is integrating Correspondances into its program and the Grand Palais is presenting a work in the Nouveaux Réalistes exhibition. This wonderful set of events allows us to reflect upon the work of one of the greatest American sculptors.

Represented for over thirty years by the Karsten Greve Gallery, John Chamberlain will propose a set of ten sculptures conceived for the exhibition as well as a selection of earlier works, such as those from the Kiss series (1979).

Born in a small American town in 1927, John Chamberlain begins his training at the Art Institute of Chicago which he then continues at Black Mountain College. At this time he experiments with various ordinary materials and considers abstract expressionism as a point of departure for his research. He favors a speedy handling of material and removes any traces of craftwork in the execution of the works. It is in 1957 that he sees a “useable material, already painted” from an old Ford. From then on Chamberlain cuts out and transforms car carcasses which he compresses and “models”. The fenders and the hood yield to the pressure and become complex bodies, flexible and fixed all at once. Air circulates in the cavities, runs through the broken lines and rushes along the paths. The energy of the lines, the harmony or the intense colors, like the contrast between the delicate forms and a visibly violent process of execution are characteristic of this brilliant work, which captures and violates the eye. If John Chamberlain has explored and re-explored this path throughout his career, he has also worked with other materials and mediums: paintings (geometric), Plexiglas and urethane foam sculptures, photographs.

The recent works, mostly from2006, preserve the tension between the force of the material and the sensuality of the folds, sometimes reminding us of paper. On the other hand, more fragmented and recomposed, they take on a different structure. The artist often covers the metal with bright and glossy industrial colors and abandons the monumental dimensions of his works all the more dense, forthright, expressive or sober.

Celebrating his 80th birthday this year, John Chamberlain lives and works in Sarasota, Florida and in New York. His works are part of the most important collections and museums of the world. Since the very beginning of the 60s, he has enjoyed important success. He takes part in the exhibition The Art of Assemblage (MoMA, New York) in 1961 and in the São Paolo Biennale the same year. In 1964 he exhibits at the Venice Biennale. A retrospective is dedicated to him at the Guggenheim Museum in 1971 and then in 1986 at the Museum of Contemporary Art in Los Angeles. Numerous exhibitions follow, in particular those of the Staatliche Kunsthalle in Baden-Baden in 1991 and the Stedelijk Museum in Amsterdam in 1996.
www.galerie-karsten-greve.com