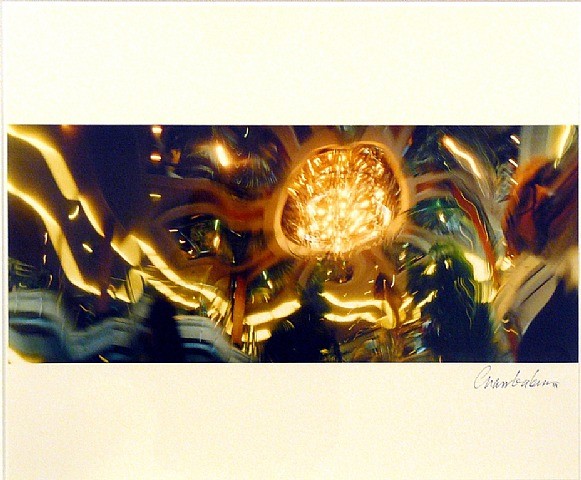 Galerie Karsten Greve, dedicates to John Chamberlain, one of America's most important and active artists, a comprehensive exhibition of his photographs.
Since the beginning of the 1960s, Chamberlain created sculptures by using mostly colourfully painted automobile metal. During this time he also began taking photographs, a medium he continued to explore.
His works range from small-scale and fragile objects, to huge sculptures of great presence. Representing John Chamberlain for over 30 years, Galerie Karsten Greve has exhibited his photographs and sculptures since the 1980s.
Chamberlain received a Widelux camera in 1971 from Larry Bell, but it was only from 1977 that he truly started to work with it. He exhibited his Widelux photographs for the first time in New York, in 1979, in a group show together with Bell and other photographers. Widelux is a fully mechanical camera, originally developed in Japan for 20th-century rural and urban documentation. It enables the user to capture panoramic pictures, equipped with a 26 mm lens, allowing for a 126 degree horizontal view (140 degrees diagonally across the negative).
This device, with its lens pivoting on an axis, permits some special effects, whilst combining cinematic properties of film, with the portability of a regular camera.
Since the opening pivots on an axis, the film is exposed gradually, capturing, in a single image, a series of successive instants.
During the exposure, the artist moved and turned the camera: rarely looking through the viewfinder, rather often shooting from the hip. “He thrusts his hand into space with the confidence of a sculptor, but with an equal awareness of what is left to chance, what is unknowable.”, as Donna De Salvo stated in “Nerves of Steel”.
Chamberlain took photographs in public and private spaces: streets, restaurants, his own studio or home, and personally followed the development of the images.
This exhibition presents, among others, a series of photographs, the artist captured in Paris in the late 1980s. These were taken while walking in the street, near the Eiffel Tower, while dinning in local brasseries or in the most popular restaurants such as Laperouse.
Chamberlain appears in many of his photographs: he plays with the camera, being at the same time author and protagonist of his shoots. Since he was accustomed to moving the camera whilst the shutter was opened, the images seem to show places in motion and the spectator loses perception of space.
This ‘bending of the space’ constitutes a significant parallel to the formal principles of his sculptural work. Chamberlain's practice does not follow a strict plan, it cannot be completely included in a defined artistic movement, it remains absolutely unique in its own way.

John Chamberlain was born on April 16, 1927 in Rochester, Indiana. Between 1951 and 1952 he studied at The Art Institute of Chicago and attended Black Mountain College in 1956. He worked in New York, California, New Mexico, Florida, Connecticut, and finally established his residence and studio on Shelter Island. In 1960 Chamberlain held his first major solo exhibition in New York at Martha Jackson’s Gallery. Since then, he has staged more than 100 solo shows. His works have been exhibited around the world in the most important museums and galleries, and have been included in the São Paulo Art Biennial (1961, 1994), the Venice Biennial (1964), the Whitney Biennial (1973, 1987) and Documenta, Kassel (1982).The Solomon R. Guggenheim Museum in New York dedicated to Chamberlain’s work two retrospectives, the first in 1971 and again in 2012. John Chamberlain died in New York on December 21, 2011.
www.galerie-karsten-greve.com