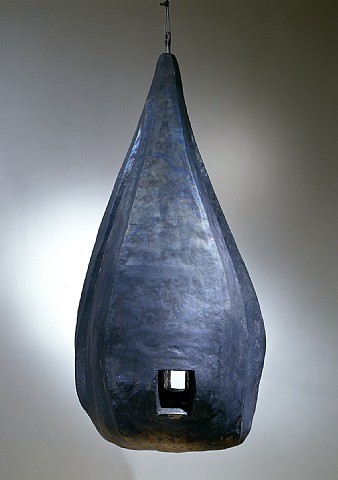 The Karsten Greve Gallery is pleased to present the exhibition Rare and Important Works from a Private Collection devoted entirely to Louise Bourgeois. With this event, Karsten Greve pays homage to one of the greatest artists of our time, with whom the gallery has been working for thirty years. The exhibition unveils an early period in the artist’s creation showing a great number of sculptures from the end of the 1940’s. These include old works that have rarely been exhibited and that cover an essential role in Louise Bourgeois’ production. Displaying great formal variety, the works presented bear witness to the fundamental subjects addressed by the artist throughout her long, creative and extremely rich career. The exhibited sculptures thus allow the visitor to travel through the major moments of her work, which is both constantly enigmatic and explicit at the same time.

Louise Bourgeois’ biography is an integral part of her creations. The artist’s life and her works are bound together so deeply that it is impossible to understand the one without the other. In this sense, the surface of the sculptures, just like the line of her drawings and the presence even of the installations are imbued with experiences lived in her childhood. Born into a family of ancient textile restorers, Louise Bourgeois began helping her parents in their workshop on the Boulevard Saint Germain at the age of ten. She then began her studies at the Sorbonne in mathematics, which she never completed and instead, switched to philosophy. These two paths, which are both different and convergent, were seen by the artist as two distinct paths leading to the same thing, which was the search for stability - a kind of order and perhaps even logic in her life. Though the greater part of her artistic production was produced in New York where she set up after marrying the American art historian Robert Goldwater, Paris and France remained references throughout her life. Paris was her birthplace, the city of her blossoming at the Beaux-Arts and the Ecole du Louvre, the city she left that became so distant. But France is also the country of her family nightmare, which is at the origin of all of her works, the place of trauma from which she needed to distance herself in order to survive.

The bronze sculptures, rising up straight and slender, cover an essential role in the artistic and personal story of the artist. Personnages, which is the title given to these works of her youth, were produced between 1947 and 1950. These precariously balanced streamlined monoliths became the symbol of the psychological instability the artist lived through during these years. Having left Paris for New York in 1938, it was during this period that Louise Bourgeois felt a deep nostalgia for France and the people that were close to her. Bringing together these totemic elements allows the visitor to enter the space of revocation and memory where they find themselves surrounded by personages/people as in a social context. By revoking her youth, Louise Bourgeois likewise confronts the theme of the woman-mother, which is probably at the origins of her entire œuvre. The sculptures Pregnant Woman I and II along with Woman with a Secret, produced between 1947 and 1949, are thus rare examples of the first developments of this subject that the artist subsequently deepened throughout her life. The ambivalence between man and woman, just like that between woman and mother, is a fundamental element in her works where the references to genre become blurred and uncertain.

The concept of refuge and shelter is a constant in Louise Bourgeois’ work. Seen both as a place to hide and a lair from which to exit, refuge represents a key element in the work of the artist. She develops it constantly in a formal progression that begins with Nids, (Nests) “body inhabitants” representing organic dwelling places and ends with Cellules, (Cells), which are cage-like grills reconstituting the rooms of houses. The work Lair is part of this research. It involves a lair made of lead where one is stuck and protected at the same time. The presence we sense inside, in the dark, is the symbol of the secret that is protecting itself in the house/refuge. In this sense, Lair is the example of a foreshadowed exorcism that has not yet been entirely completed and which confers a compression of emotional tension and expressive power to the work.

As of the 1990’s, aluminium began to appear in Louise Bourgeois’ work. The brilliance that is introduced by this material accentuates the aggression provoked by the sharpened contours of the works. This offers the visitor a perceptible experience that symbolises the artist’s interior state, as is the case for the piece The Mirror made in 1998. The mirror does not reflect the image of the person facing it but rather the artist’s state of mind. What we see is her intimacy, deformed, troubled and incomprehensible. By conceiving art like a guarantee of psychic health, Louise Bourgeois turns the creative process into a veritable exorcism. The artistic act becomes then the only means of pacifying and rationalising the profound wounds rooted in her personal history.

Louise Bourgeois was born on December 25th, 1911 in Paris. She was admitted to the Ecole de Beaux-Arts and frequented, among others, Fernand Léger’s studio. The artist was awarded the inaugural installation at the Turbine Hall of the Tate Modern in London in 2000. Her works are featured in the greatest collections and museums of the world, notably MOMA and the Pompidou Centre. Her works are likewise included in prestigious private collections. Throughout her career, Louise Bourgeois has obtained numerous distinctions such as the Lion d’Or received at the Venice Biennale in 1999 and the Légion d’Honneur in 2008. In 2009 she was honoured by the National Women’s Hall of Fame for having marked the history of the United States. Louise Bourgeois became an American citizen in 1951, and died in New York on May 31st, 2010 at the age of ninety-eight.
www.galerie-karsten-greve.com