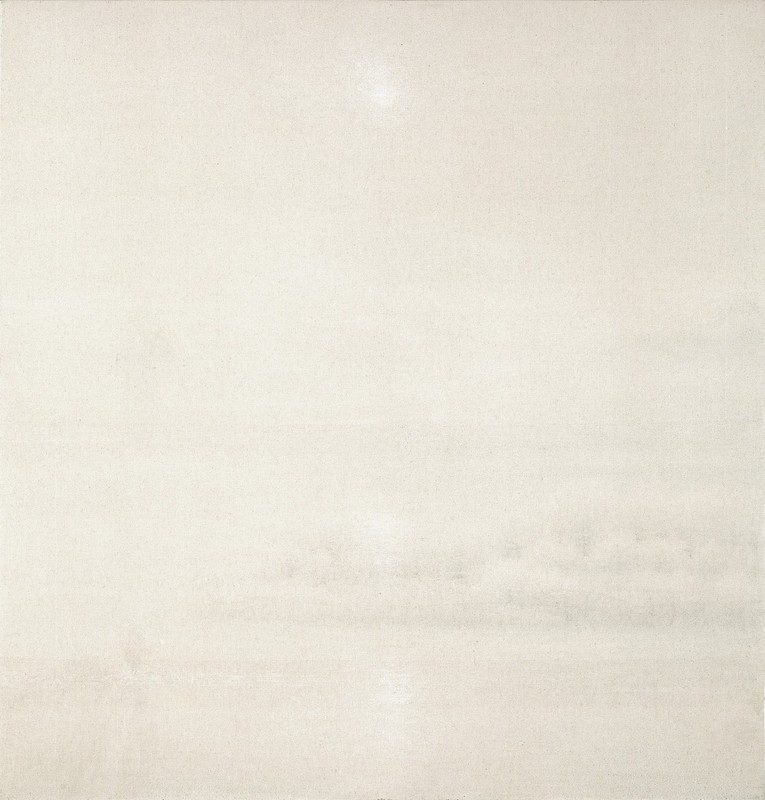 The exhibition Calme marks the beginning of the collaboration between Galerie Karsten Greve and the Chinese artist Qiu Shihua. Dedicating to him his first solo exhibition in France for almost ten years, the gallery exposes a selection of oil on canvas paintings produced between 2010 and 2014. Never titled, Qiu Shihua’s works have no strictly representative or crisply figurative intention: the lightness of the marks and the precision of an ethereal and almost indecipherable technique evoke an impression, or atmosphere as Qiu Shihua would say, on the canvas. Whether one does or does not discover his ineffable landscapes is thus a question of intuition and trust, all being flat and calm.

Born in 1940 in Zizhong, Qiu Shihua is fascinated by the revealing power of the world around us and our way of perceiving it. Dazzled by the garish neon lights of contemporary daily life, at first glance the eye of the observer only perceives one tone in his works; that of the fibres which make up the canvases. Then, gradually, as in any process of consciousness, the marks in the scenes represented reveal themselves, more or less slowly according to our individual disposition to wait and to observe. A stranger to all excess and distrustful of embellishment, Qiu Shihua creates works referring to the perception of the viewer. His close to monochrome paintings thus lay bare the way we see around us and, therefore, the way we see ourselves.

At the start of his approach, Qiu Shihua did not receive any real artistic training: he learnt everything single-handedly by painting what he saw with a sense of curiosity. During the sixties, as a student at the Xi’an Art Academy in a China still closed off to the Western world and in particular to his art, Qiu Shihua knew of the Socialist Realism deriving from the Soviet influence and traditional Chinese art. At that time, the artist concentrated on practicing life studies outside, a quite singular choice in view of the cultural context of the country, where the art was primarily dedicated to propaganda. In the seventies, during the Cultural Revolution, Qiu Shihua worked in a cinema in the town of Tongchuan where, amongst other things, he busied himself producing film posters offered by the schedule. In 1984 the artist left this work, he travelled in Europe, visited the Gobi desert and became closer to Taoism. This change brought with it a shift in his production; putting to one side outdoor painting, Qiu Shihua dedicated himself to landscapes through creating them in his studio. Hiding in the subtle outdoor panoramas that one perceives in his paintings are, in effect, those interiors, where the soul traces its course. Qiu Shihua has practiced Taoism for more than 20 years. Indicating a true way of life beyond that of religious practice and philosophical tradition, this term means the teaching of the Way. The paintings which make up the exhibition are born of this principal: the landscape is neither the purpose nor the end but the route which allows us to advance for the same reason as a trip does, to travel. The issue of colour here is off topic, having no place in Qiu Shihua’s process: what counts is not about having colours or not, each tone being an expression of the same thing. More than in terms of shades and palette, the works presented in Calme must be conceived as arising from the opposition between light and darkness. Thus, in making light, darkness rises to the surface, invisible to those who do not know how to see it.

Born in 1940 in Zizhong, in Sichuan Province, China. He graduated from the Xi’an Art Academy in 1962 with a specialisation in Oil Painting. Qiu Shihua is today a fully reputed international artist who was exhibited in 2001 at the New York Kunsthalle and, in Europe, in group exhibitions such as Mahjong at the Kunstmuseum in Bern, Switzerland (2005), as well as in Hamburg in Germany and Salzburg in Austria (2006), The Sublime is Now at the Franz Gertsch Museum (2006), and Shanshui at the Kunstmuseum Luzern (2011), in Switzerland. His works were exposed at the Shanghai Biennial in 2004 and at the Venice Biennial in 1999, as well as at the Sao Paolo Biennial in Brazil in 1996. In 2012, important solo exhibitions were dedicated to him by the Hamburger Bahnhof Museum in Berlin and the Pfalzgalerie Kaiserslautern Museum, in Kaiserslautern, Germany. Qiu Shihua lives and works in Shenzhen, China.
www.galerie-karsten-greve.com