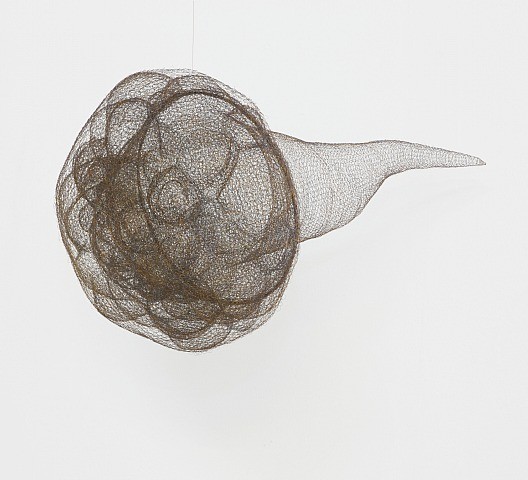 The Karsten Greve Gallery is pleased to announce the opening of the exhibition Sculptures, a selection of spatial works that highlights how a broad range of contemporary artists address this art. The works presented go beyond what is expected of sculpture: steel is knitted, antique books are cut, horse hair is knotted, cloth is assembled with rope, but more traditional materials such as earthenware, bronze and stone are also reinterpreted. Shape reveals décor, religious or mythological subjects in large or small format, that fill in and sometimes invade the space, transforming it into a jungle or sculptural collage. Calm and contemplation unveil an abstract sculpture of reduced forms and an aesthetic centred on its own materiality, exceeding the laws of physics and the other, through the quasi-organic transparency and fragility of the object, which is almost a shadow. Sculpture no longer needs a pedestal: it unfolds on the floor, walks on the walls, is attached to the ceiling or floats freely in space. This exhibition brings together both the works of renowned artists like John Chamberlain and Louise Bourgeois and the work of promising talents, some of whom are exhibiting for the first time in the gallery.

The sculptures of the artist Siegfried Anzinger (1953) evoke an impression of spontaneity and immediacy. Produced with the non finito technique, his ceramic works with their enigmatic traits favour an immediate perception of the represented subject, which is often of a religious nature.
Pierrette Bloch (1928) has been devoted to sculpting with horsehair since 1984. Her meticulous and persistent work reproduces uncluttered motifs comprised of simple materials such as India ink and rope. Horsehair, which she braids horizontally in tight lines, loosely or unevenly, becomes the alphabet for a writing that is re-transcribed in space.
Louise Bourgeois (1911-2010) gives shape to her subjects in the limit of what can be represented and invites the outside world to share her intimacy. Her work is devoted to subjects that are as complex as they are universal, such as birth and death, fear and love, the body and sexuality, which she explores as far as possible. The power of her oeuvre is derived from the enigmatic reach of her work, that reveals by implying more than it avows.
John Chamberlain (1927-2011) experiments with materials found in the every day world in his work. Back in 1957, after having recognised “available material that was already painted...”, Chamberlain began cutting and transforming the bodies of cars that he would compress and “model”. The result of this process is complex bodies that are at once supple and frozen in their configurations.
The sculptures of Leiko Ikemura (1951) represent figures that are fascinating in their ambiguity, as though captured in the process of metamorphosis. Though solidly rooted, they seem to be constantly in danger of losing their balance: they thus form an evanescent unity and invite reflection upon the role of the figure and the pedestal.
Anish Kapoor (1954) has always been seduced by the power of shapes that are soft or very pointed, arousing an interest in the viewer for the volume of the object. Astonishing for the purity of their beauty, and at times, by their size, these works fascinate because of the reflection they incite for their surfaces.
Catherine Lee (1950) works in metal, bronze, ceramic and glass, which she treats in a very specific manner. The importance granted to the material and the handcrafted creation of the works distances the artist from a minimalist approach in favour of subjectivity that asserts itself through shapes that are in harmony with the space.
The Chinese artistic tradition regains an essential role in the creations of Ma Jun (1974). By applying the thousand year-old technique of Jindezhen, he produces symbols of the modern western world such as televisions, cars and Coca-Cola bottles. They are non-descript products that he chooses as representatives of mass production.
Maria Nepomuceno (1976) re-uses elements of our daily lives. These include sisal rope, nylon and string and different coloured beads she recuperates from old curtains. These objects of our daily lives, despite their symbolic value and beyond it, fit into her works to ultimately become the very substance of them.
The work of Ernesto Neto (1964) finds its place beyond abstract minimalism. His biomorphic sculptures are within the reach of the public who can touch them, grab hold of them, or even walk on them. Amorphous shapes that are successively filled with polythene or aromatic spices, these works surround the viewer and fill them with wonder.
Ceramics are nowadays very much a part of the vocabulary of contemporary artists. With Norbert Prangenberg (1949-2012), this practice, which he has been experimenting with since the 1980s, coexists with a production of drawings and paintings. His work thus appears as a corpus whose different parts remain autonomous.
Stone, through the singularity of its structure and colours, is placed at the heart of Karl Prantl’s work (1923-2010). By highlighting the noble and ancient character of this material, the Austrian artist reminds us of the pre-eminence of stone over trees, animals and man, who made their appearance on this planet long after.
Georgia Russell (1974) gives new life to the objects she selects: this often involves books, photographs or maps that she chooses for the evocative power they harbour and that she then transforms by lacerating them with a scalpel.
Created from rectangular blocks of wood or bronze, the works of Joel Shapiro (1941) oscillate between abstraction and figuration. Most of his sculptures, standing at times on one leg and at others on two, or lying on the floor or climbing the walls, lead us to associate them with the human figure.
b>Yutaka Sone (1965) works primarily with marble and crystal. His work does not stem from any culture in particular, but he draws upon numerous voyages the artist has made that come together in a poetic vocabulary expressed through parcels of experience, such as snow flakes.
Luise Unger (1956) often mentions a quote by Oscar Wilde: “The true mystery of the world is the visible, not the invisible”. This phrase accords perfectly with her half transparent metallic objects. Practically bodiless, the dark surfaces of her sculptures are delineated by the opposition with their direct environment: they appear to be naked, geometric and sober, but in reality they conceal something more profound while producing uncertainty at the same time.
www.galerie-karsten-greve.com