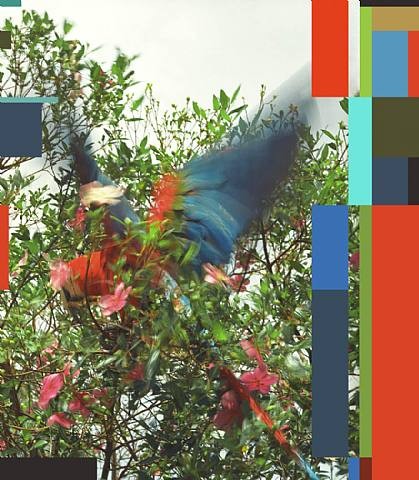 The Karsten Greve gallery is pleased to present a solo show dedicated to the Argentinean artist Sergio Vega. Conceived as a multimedia exhibition specially created for the gallery, the show will feature an important series of photography, a selection of drawings, videos and installations illustrating his “Parrot theory” which is part of an extensive work elaborated on the myth of the lost paradise.

Since 1995, Sergio Vega, has been working on « Paradise in the New World » a project based on a theory from the seventeenth century by Antonio de Leon Pinelo that locates the Garden of Eden in the center of South America. Three years ago, he started an investigation on the iconology of Parrots that continues up to this day. In the seventeenth century, parrots were the quintessential bird of Paradise.

The exhibition focuses on intertextuality and the play between language, reproducibility, and the color involved in the various interpretations of parrots in culture. “Parrot theory” demonstrates how parrots are simultaneously constructed as signifiers of eccentricity for their behaviour, but particularly for their act of deconstructing language – perception based on their ambiguous presence as mirrors of reality – while also embodying a paradigmatic case of pigmentation, as their plumage represents the most complete archive of colors manifested in the species of the natural world.

In his series « Parrot color chart », the artist employs sampling from individual pixels in a photograph to intervene in the image by mirroring it into an overlaying grid of arbitrary constructions. The randomness of the shapes and the specificity of the colors picked from the parrot’s image establish a balancing counteract by framing the cropped photograph from inside and out, resulting in kaleidoscopic, modernist renditions of nature.

Scientific research on parrots took a drastic turn when the experiments carried at Brandeis University by Dr. Pepperberg with Alex, an african gray specimen determined that parrots can learn to use human language to communicate. The study also explains that Alex could even create new words, by combining the sounds and meanings of others. In the demonstration of his parrot theory, Vega argues that Alex's phenomenon throws new light on interpretations of Mallarme's geography of the text, Derrida's conception of the functions of deconstruction, and Baudrillard's portrayal of the subject condition as the "simulator". In addition, he announces the "Era of the Parrot", a movement he ascribes to the decline of the Eagle as a powerful signifier, but also to the rapid proliferation of forms of reproducibility, the endemic cyclical repetitions in public discourses, the fashionability of colors, and the rise of a global postcolonial avant-garde.
www.galerie-karsten-greve.com