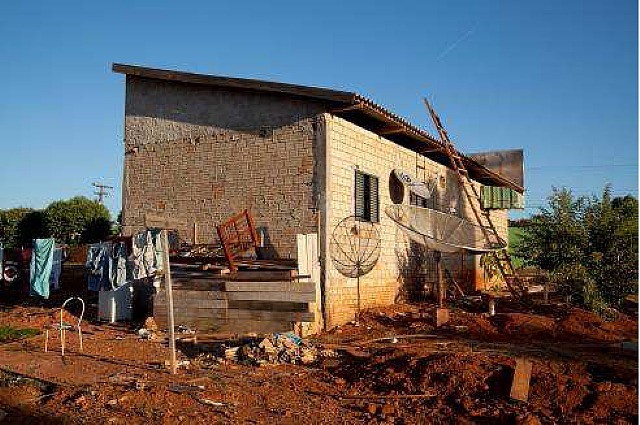 The Karsten Greve Gallery is pleased to present the exhibition Sergio Vega – July 14th, The 4 Steps of a Rooster Manifesto and Other Stories... The exhibition offers a video and numerous photographs in small and large format addressing subjects as varied as urban landscapes and the Amazon forest.

Attentive to the cultural and social dynamics that surround him, Sergio Vega (Argentine, 1959) has been developing a project since 1995 entitled “El Paraíso en el Nuevo Mundo” (Paradise in the New World). He took his inspiration from a book written in 1650 by Antonio de Leo Pinelo, a Spanish historian who placed the Garden of Eden in Latin America. Sergio Vega questions this idea of terrestrial paradise: his research has thus lead him to the Mato Grosso, in Brazil, where he went to examine and reinterpret this theory. This ambitious project lead the artist to produce a growing number of photographs, sculptures, videos and other works inspired by texts that document his journey in search of Pinelo’s paradise. Vega pushes the spectator towards a new interpretation. He creates works that interrogate the systems of intercultural representation that are both contemporary and historical. His works have the value of intimate diaries, bearing witness to his travels and adventures, whether they are documentary, ironic or poetic.

The photographs of Amazonian houses invite reflection on man’s intervention on the natural environment and the creation of social structures that derive from this artifice. In the work July 14th, the politico-social critique is a direct link to French history. On a dusty morning of the 121st anniversary of the Revolution, Sergio Vega went to the Amazonian village of Claùdia where he discovered a brightly coloured house, which drew his attention. This vision suddenly undertakes a collection of mysterious and unexpected references to the Paris Commune, the year of which, 1871, is inscribed in the façade of the house and is also a reference to Napoleon. The shape of the public telephone in front of the house reminded Vega of a caricature of Napoleon that he discovered by chance in Paris in a bookshop near Saint Michel. The artist seeks to take hold of the symbols in this photograph and highlights the commemorative role of this artistic medium capable of reviving the revolutionary spirit. So by mixing theory, personal experience and critique of society’s structures, Vega manages to create a world where sensorial experience and disputatious views meet.

The role that this project covers in Sergio Vega’s work reveals the importance the artist ascribes to natural and wild freedom as a metaphor for paradise. The works taken from the series Mist in the Forest (2010) address the notion of iconography in nature. These photographs of the forest in fog and mist refer back to the landscape paintings of the Romantic movement through the intimacy of their formats and their representation of primitive nature. Taken in its primordial power, this sumptuous and sensual nature evokes the concept of the sublime, which leads the artist to refer to them as the Sublime Series. With respect to the large format photographs such as Rubens’ Twist, Dark Forest and Caravaggio’s Moss, Vega chooses to represent the tropical forest by using the perspective typical of Baroque painters and by allowing himself to be inspired by the grand masters of Pinelo’s period, such as Caravaggio, Rubens and Rembrandt.

With the series 4 Steps of a Rooster Manifesto, Vega develops a photographic narration that reflects upon the actual condition of art. The rooster moves about in a kind of depot, a mournful space inhabited by rubbish and rusting metal where he struts without any goal or apparent conscience. Surrounded by objects conceived as Duchampian ready-mades where the urinal fountain becomes a toilet, the rooster takes four steps in this chaotic reality: for the artist it is a progression leading to a symbolic resurrection of the surrealist manifesto. Sergio Vega’s work can therefore be seen as a kind of rekindling of Surrealism: in response to the paucity of contemporary culture, he offers a new reality through which one can let oneself be seduced – a surrealism of hovels and slums. It is in this unique and multi-referential universe that the artist invites the spectator to understand the Baudelairean correspondences that surround us, which only the attentive stroller can grasp.

Sergio Vega was born in Buenos Aires in Argentina in 1959. He lives and works in Gainsville, Florida, where he is a professor of photography at the University of Florida. Sergio Vega has participated in numerous international exhibitions, among which the 51st Venice Biennale, the 5th Biennale of Lyon, the 3rd Moscow Biennale, the 2nd Kwangju Biennale and the 1st Yokohama Triennale. His video The Missing Tail and The Deer (Not the Iguana) was selected for the Worldly House section of dOCUMENTA 13 in 2012.
www.galerie-karsten-greve.com