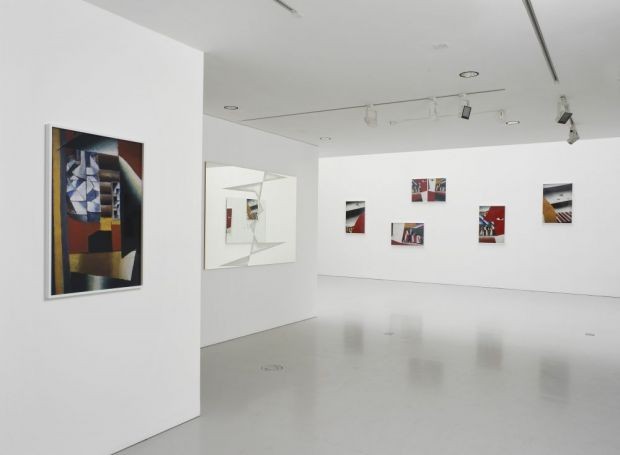 Kate MacGarry is pleased to present an exhibition by Eustachy Kossakowski and Goshka Macuga that juxtaposes their two responses to the work of Kazimir Malevich.

In 1989, Polish artist-photographer Eustachy Kossakowski (1925-2001) documented the first retrospective of Kazimir Malevich at Stedelijk Museum, Amsterdam. Kossakowski, inspired by Malevich’s pre and post-Supremacist paintings, created a distinct body of work; a series of ten colour photographs which focused specifically on fragments from six Malevich paintings; Head of a Boy (1928-9), A Portrait of Ivan Vasilevich (1913), Cow and Violin (1913-4), The Accounting Lectern and Room (1913-4), Peasant Women in the Field (1928-32) and Landscape with Five Houses (1928-32). In doing so, Kossakowski uncovered texture, stretched colour fields and disrupted the original composition of the works; he was repeating Malevich’s iconoclastic Supremacist gesture by collapsing the distinction between the figurative and the abstract elements of Malevich’s paintings.
Polish-born Goshka Macuga reflects on nuances of authorship, the influences that people have on each other and the protection of individuality in her practice. Kossakowski’s photographs similarly raise these issues and are exhibited here alongside three mirrors Macuga created using Malevich diagrams from 1922. Looking at Kossakowski’s photographs reflected in Macuga’s mirrors, the viewer maintains a connection with, but is increasingly distanced from, Malevich's original imagery. This emphasises Macuga's interest in the issues and restrictions with the contemporary presentation of historical material. First exhibited in Hotel Polonia in Warsaw in 2010, Kossakowski's photographs returned to the exact location of Malevich's first solo exhibition outside of the Soviet Union more than 80 years previously.

Eustachy Kossakowski (1925-2001) studied architecture at Warsaw University. From the early 1960s he worked as a photographer for numerous Polish publications. He was closely connected to the Polish artistic avant garde, documenting exhibitions at the Galerie Krzywe Kolo, Cracow and Galerie Foksal in Warsaw. He collaborated with Tadeusz Kantor, Cricot 2 Theatre and Jerzy Grotowski’s theatre. He also worked closely with Edward Krasinski to document his work. From 1973-1990 Kossakowski worked as a photographer for Centre Georges Pompidou, Paris and from 1982-1985 for the Museum of Contemporary Art, Paris while collaborating with Parisian publications; Hachette, Phillippe Sers, Jean-Claude Lattes, l'Imprimerie Nationale.

Goshka Macuga (1967) was born in Poland and lives and works in London. Her work has recently been included in the 8th Berlin Biennale. Solo shows include: Exhibit A, Museum of Contemporary Art, Chicago (2012); dOCUMENTA 13, Kunsthalle Fridericianum, Kassel, Germany and Queen’s Palace, Kabul, Afghanistan (2012); It Broke from Within, Walker Art Center, Minneapolis (2011); The Nature of the Beast, Whitechapel Gallery, London and I Am Become Death, Kunsthalle Basel (both 2009); Objects in Relation, Art Now, Tate Britain (2007). In 2008 she was shortlisted for the Turner Prize.

With thanks to Joanna Gemes and Andrzej Turowski.
www.katemacgarry.com