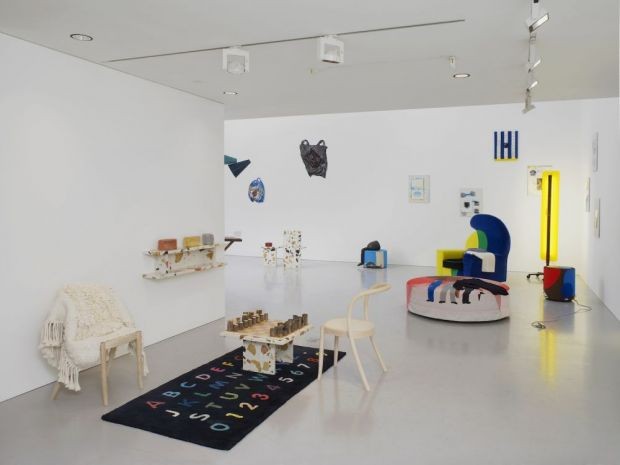 House Party is an exhibition of furniture, ceramics, painting, sculpture, jewellery and clothing by 24 artists and designers selected by Kate MacGarry and Brent Dzekciorius.
DZEK is a design production company founded in 2009 by design advisor and curator Brent Dzekciorius, who has collaborated with many of the world's top design studios to develop special projects, exhibitions and editions. He has served as an acquisitions advisor and ambassador for the British Crafts Council since 2011 and is a curatorial advisor for the V&A.
1882 – Currently run by fifth generation Emily Johnson and her father, Christopher, the Johnson Brothers first began producing ceramics in 1882 in the heart of the Stoke-on-Trent Potteries. 134 years later 1882 Ltd. continues the Johnson legacy with the company name evoking the deep routes of the family heritage. Their mission is to champion inventively designed ceramic products and they collaborate directly with designers including Fort Standard, Max Lamb, Faye Toogood and Philippe Malouin.
JOSH BLACKWELL – Born 1972 in New Orleans, lives and works in Brooklyn, New York. Blackwell's works use embroidery applied to found materials such as discarded plastic bags. He studied at Bennington College and CalArts. Recent exhibitions include: Our Haus, Salon 94, New York, 2013 and A Conspiracy of Detail, Mackintosh Museum, Glasgow School of Art, Glasgow, Scotland, 2013.
YOKO BROWN – Born 1974 in Japan, lives and works in Suffolk and London. For the exhibition Brown has re-structured bespoke mens shirts, re-stitiching cuffs and collars to create new garments for women. Her clothing is often made from found and vintage fabrics.

DENT-DE-LEONE - is an artists' books publishing house, with recent publications by Ryan Gander, Francis Upritchard and Bedwyr Williams. It was founded by Martino Gamper, Kajsa Ståhl and Maki Suzuki in 2007. Books are designed by åbäke.
KARL FRITSCH – Born 1963 in Germany, lives and works in New Zealand. Challenging the conventions of both sculpture and jewellery making, Karl Fritsch's rings are intricately constructed yet coarsely finished, marked by rough, oxidized finishes. He mixes high and low materials, giving equal billing to diamonds, rubies, plastic pearls and glass gemstones.

MAX FROMMELD - Born 1982 in Ulm, Germany, lives and works in London. Frommeld is interested in how good design can have an impact on our daily lives. He has made a folding boat out of one sheet of plastic with Arno Mathies and handmade glass spoons which will be featured in the exhibition.
MARTINO GAMPER – Born 1972 in Merano, Italy, lives and works in London. Martino came to prominence in 2007 with his project 100 Chairs in 100 Days. Recent exhibitions include Martino Gamper; Design is a State of Mind, Serpentine Sackler Gallery, London 2014 and Tu Casa, Mi Casa, Modern institute, Glasgow.
GEMMA HOLT – Born 1977 in Blackpool, lives and works in London. She trained as both an artist and designer and studied Design at the Royal College of Art, London. She makes jewellery and other objects in a variety of materials, from wood to precious metals, she will show a new bracelet in the exhibition.

HUMANS SINCE 1982 - Born in 1982, Per Emanuelsson in Sweden and Bastian Bischoff in Germany, both live and work in Stockholm. They founded their studio in 2009-2010 during their Master graduation at HDK Gothenburg. They are best known for Clock, Clock a series of analogue clocks that communicate time in a digital format. They have produced a new kinetic timepiece for the exhibition.
MARC HUNDLEY – Born 1971 in Toronto, Canada, lives and works in New York. Hundley's hand-printed t-shirts, canvases and works on paper, form a complex constellation of references to books, images and music that correspond to significant moments in the artist's life. Recent exhibitions include The Waves, The Body Alone, Team Gallery, New York and Signs and Messages II at Kate MacGarry, 2013.
MAX LAMB – Born 1980 in Cornwall, lives and works in London. He recently produced a unique composite marble, Marmoreal, with Dzek which was shown at Salone del Mobile 2014 in Milan. He exhibited at Kate MacGarry in May this year, showing a series of his polystyrene furniture with paintings by Luke Gottelier.
PHILIPPE MALOUIN - Born 1982 in Canada, lives and works in London. He has produced rugs painstakingly made of Japanese-style chain-mail or stools that double as ballpoint pens, tracking their movement across the floor. His Daylight Lamps, slatted "artificial windows" that appear to produce real daylight and can be arranged like geometric puzzle pieces.
PETER MARIGOLD - Born 1974 in London. Marigold has worked in sculpture and theatrical and event scenography, focusing primarily on furniture design. An avid collector, much of Marigold's work is concerned with storage and object display, and he often combines natural and man-made materials within simple, austere structures.
MICHAEL MARRIOTT - Born 1963 lives and works in London. Marriott has a simple approach to design, often incorporating found objects in his intelligent and economical solutions. He has designed and curated numerous exhibitions, the most recent being Selected by, a group show of ceramic work at Limoncello, London this November.
PETER MCDONALD – Born 1973 in Tokyo, lives and works in London and Japan. His paintings depict a colourful world inhabited by people engaged in everyday activities, constructed with an elementary, graphic language. Recent exhibitions include Winnebago, Carpets, Onsen, Potter, Daiwa Foundation, London and Visitor, 21st Century Museum of Contemporary Art, Kanazawa, Japan, 2013.

FLORIAN MEISENBERG – Born 1980 in Berlin, lives and works in Dusseldorf and New York. Meisenberg plays with the classic parameters of painting. His recent exhibitions have been large-scale installations, which also include print and video for example The New World Hotel at Kasseler Kunstverein, Kassel, Germany, 2014.
OTTO – Founded by Roula Nassar, born 1978 in Al Khobar, Saudi Arabia, Otto is a New York based multidiscipline studio whose works encompass photography, film, publishing and knit.
RENEE SO – Born 1974 in Hong Kong, lives and works in London. So works with ceramic and wool, creating sculptural and knitted portraits that suggest multiplicity of lineages and styles. Her ceramic work is included in Selected by at Limoncello curated by Michael Marriot and Jesse Wine in November this year.
ANDREW STAFFORD - Born 1965 in Burgess Hill, UK, lives and works in London. Staf is a furniture and product designer and long-time collaborator with Kate MacGarry. He designed the interiors of the first and second gallery, in Redchurch Street in 2002 and Vyner Street in 2007.

STUDY O PORTABLE – Study O Portable is husband and wife team; Bernadette Deddens born in The Netherlands in 1981 and Tetsuo Mukai born Japan in 1978. They make objects about the designed environment and our relationship to the cultural landscape with a particular interest in the transitional nature of our ideas towards objects.
HARRY THALER – Born 1975 in Merano, Italy, lives and works in London. His background as a goldsmith and craftsman has a strong effect on his elaborate yet timeless designs. This year he won the Monocle Global retail award and the IF Design Award.
FAYE TOOGOOD – Born 1977, lives and works in London. Toogood designs furniture and objects in a dynamic range of materials that demonstrate a preoccupation with craft and experimentation. A recent exhibition of her work at Hostem in Redchurch Street also featured clothing by her sister and collaborator Erica Toogood.
FRANCIS UPRITCHARD – Born 1976 in New Zealand, lives and works in London. Upritchard's output as an artist includes figures, glasswork, textiles and ceramics. In 2009 she represented New Zealand at the 53rd Venice Biennale. Solo exhibitions include, Francis Upritchard, Hammer Museum, Los Angeles, 2014 and Do What You Will, Whitechapel Gallery Children's Commission, London, 2014.
www.katemacgarry.com