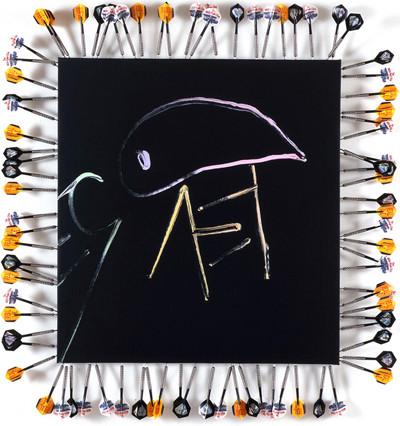 © Luke Gottelier
The Prophecy, 2007
acrylic and tungsten darts on canvas
88 x 83cm
At the end of 2004 Luke Gottelier undertook a residency in the Amazon. This new series of paintings is the result of work begun in a remote part of Brazil.
The installation and paintings explore the themes of Victoriana, pub culture, James Ensor, Aubrey Beardsley and the grotesque. The use of darts, thrown into the sides of the paintings, is ambiguous. They are a contradiction between the exotic and the low, and an absurd extension of the tradition of hammering tacks in the side of paintings. They reference St Sebastian iconography (the patron saint of archers and pinmakers) and draw on the quotation attributed to Henry Fuseli when remarking on a student's drawing in the Royal Academy "It is bad; take it into the fields and shoot it, that's a good boy."* The darts in some way acknowledge the historic parochialism of English painting and at the same time are icons of Englishness.
*Peter Ackroyd, Blake, p.105, Minerva, 1995
Some of the paintings are completely blank, others are simple drawings, receding as if threatened by the darts that bristle around the canvas edge. The black backgrounds hold the objects and figures as if they are emerging from within it. Some of the images are utterly implausible, some as mundane as a garden hose "It is a matter of natural selection, the survival of the fittest, that settles whether they become paintings or not."
Luke Gottelier has also commissioned a jungle booklist from the writer Tom McCarthy, the founder of the International Necronautical Society. The books will be displayed on a shelf made by Brian Griffiths. An excerpt from the reading list: Joseph Conrad, Heart of Darkness; Maurice Sendak, Where the Wild Things Are; Thomas de Quincey, Confessions of an English Opium Eater; Bernard-Marie Koltes, La Nuit Juste Avant les Forets; William S. Burroughs, The Yage Letters.