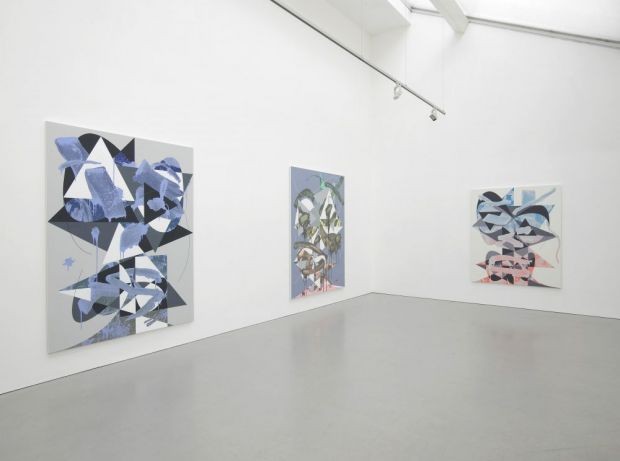 Luke Rudolf’s paintings wear expressions ranging from the convivial to the furious. They are characters one might get to love or argue with. But they also have an ulterior purpose, for they form an ongoing investigation by Rudolf into the place of the painted medium in the contemporary world. From oleaginous high art to the now-ness of digital media, Rudolf’s images soak up the logics and histories of computerised graphic software, Hard-edge abstraction, American Expressionism (Jackson Pollock), the School of London (Frank Auerbach) and Pop (Roy Lichtenstein’s comic book brushstrokes).
Rudolf’s studio-based process is demystifying. He begins by spraying a colour gradient onto canvas; next he applies screeds of paint modified with a medium to accentuate the wide brush marks; and then – a crucial step – he uses a computer to experiment with possible layers that will subsequently be applied to the canvas. While there is an element of chance in the initial mark-making stage, the latter stages are careful and meticulous. Of course, process has a history in painting, from Pollock’s heroic dripping to the grids of Chuck Close, who, contra-Pollock, stated that ‘inspiration is for amateurs’.
Rudolf’s investigation into modes of image making might be methodical but its results are sheer, visceral pleasure. The dramatic vectors, razor-edged triangles and often more muted, wintry colours of his newest paintings contrast with Rudolf’s earlier interest in acid colour and triangular forms. He is evidently still concerned with fluorescence – that great twentieth century innovation in colour – but new and more muted grounds have been incorporated. His works have become increasingly freeform as he moves away from the centripetal force suggested by his triangular shapes to the new decentred looping vectors. Look again. If this is a portrait, it is of painting itself.
Luke Rudolf, born 1977 in Redhill, lives and works in London.
www.katemacgarry.com