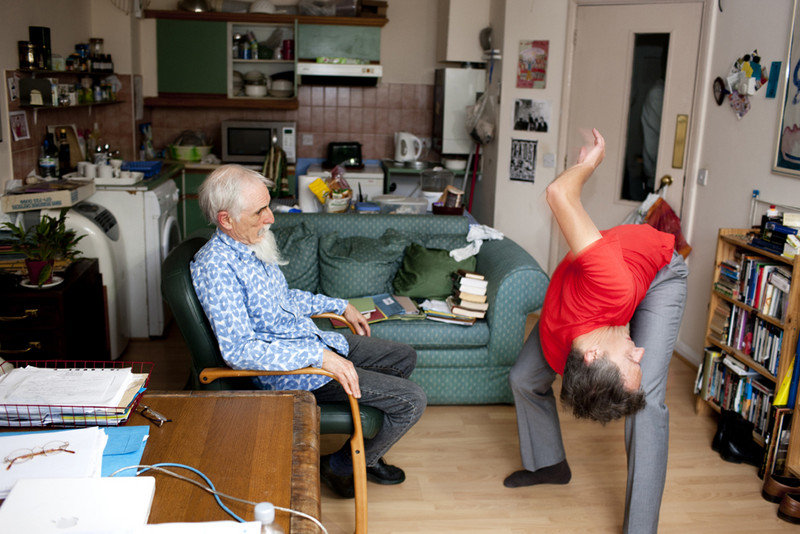 For his third solo exhibition at Kate MacGarry, Marcus Coates presents his film, A Question of Movement, made with dancer Henry Montes and commissioned by Siobhan Davies Dance.

Throughout much of his practice, Coates has sought alternative ways in which to approach and understand the questions we most struggle to resolve. A Question of Movement, as with past projects such as Vision Quest, The Trip, and most recently during his residency at The Barbican Centre, explores the role of the artist as a problem solver. This time, Coates examines the potential functionality of contemporary dance in order to articulate unconscious reasoning. We wanted to ‘test’ contemporary dance, Coates says. Traditional and folk dances all come from functional sources – to attract a mate, prepare for war or for fertility rites – and we wanted to tap into what performance can be in our society today.

To this end, Coates and Montes interviewed members of the public, in their homes or at work, asking them to pose a question, which, up until that point, had been unsolvable. Coates responds to each question with immediate and unconscious movements, at once comical and poignant. He twists, bends, jumps and even stands on his head as a means by which to channel information into a solution or answer. Despite the fact the ‘dances’ are subjective and abstract, the question-giver delivers their evaluation with great sincerity and thought.

MARCUS COATES was born in 1968 in London, UK. He recently completed a 30-day residency at the Barbican Centre, London, as part of Doug Aitken’s Station to Station. Solo exhibitions include: Skills Exchange: Urban Transformation and the Politics of Care, Serpentine Gallery, London; Implicit Sound, Fundació Joan Miró, Barcelona; Psychopomp, Milton Keynes Gallery; Marcus Coates, Kunsthalle, Zurich, Switzerland; and Marcus Coates, Museum of Modern Art, New Orleans, USA. Coates was nominated for the 4th Plinth Commission in 2014, was the recipient of a Paul Hamyln Award in 2008 and in 2009 he won the Daiwa Art Prize.

HENRY MONTES is a freelance dance maker, performer and teacher. He currently dances with Liz Roche Company, Dublin. He was a member of Siobhan Davies Dance from 1998-2009 and was awarded the 2003 Critics Circle National Dance Award for Outstanding Male Artist. He performed in the early work of Trisha Brown for Pioneers of the Downtown Scene at the Barbican Art Gallery, London 2011 and in Tino Sehgal’s These Associations at Tate Modern in 2012.