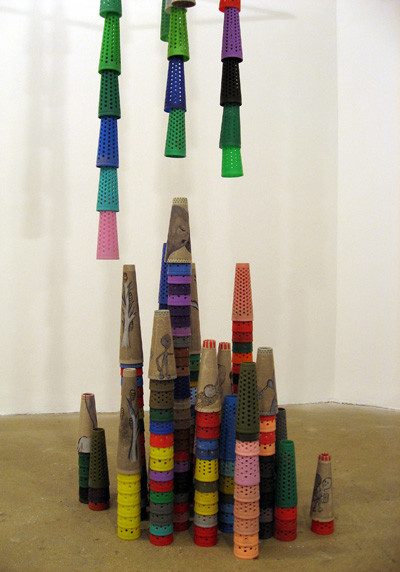 In BASUHAUS craft, design and architecture are all considered worthy of revolution. BASUHAUS is a total artwork where no element of the environment is left unconsidered. Rather than a pervading atmosphere of educationalist reform the objects in this installation are suffused with sci-fi paranoia. Here historic utopian aims have filtered through the psychodramas of the twentieth century, with traces of the nefarious intruder, the preternatural doppelganger and the shamanic leader. BASUHAUS recalls the vision of 1960s and 1970s science fiction films such as The Man Who Fell to Earth and Silent Running.

Over the past year Basu has inhabited a factory complex in a remote part of central France. Working in isolation, he is slowly reshaping a number of disused industrial buildings by hand. From this base Basu is also continuing his own experimental research project, the Institute of Transmitted Architecture “set up to monitor the spontaneous descriptions of dwelling and community that appear outside of the architectural world.” The factory complex also operates as his studio.

Sam Basu born 1967 in London lives and works in France.

Projects in 2006 included group shows World Gone Mad at Herbert Read Gallery (touring the UK) and Blake and Sons at Glucksman Gallery in Cork, Ireland. In 2005 Basu exhibited at Camden Arts Centre in a two-person show with Ben Ravenscroft Lovely Crinkle Crankle that included a residency in India researching the work of architect Laurie Baker. In the same year he had a solo project at Meyer Riegger 2, Karlsruhe Institute of Transmitted Architecture. In 2003 he showed in Lost Collection of the Invisible Man curated by Brian Griffiths at the Laing Gallery, Newcastle. Basu is currently leading a monthly round- the-table discussion at Camden Arts Centre and recently contributed to talks on the subject of demolition at the Berlage Institute, Rotterdam.