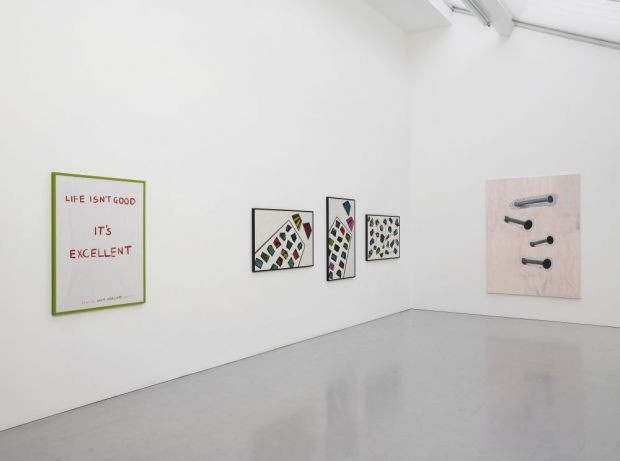 SIGNS AND MESSAGES II is the second incarnation of a group exhibition held at the gallery in 2007, titled Signs and Messages from Modern Life. The show unites artists whose works feature typography or utilise other universal symbols.
STEPHEN WILLATS integrates functional typography with photography in works that refer to sociology, semiotics and other fields; NEIL RUMMING makes paintings that place overscaled images of objects such as staples, screws and nails within a heavily reduced gestural painting field; KAY ROSEN transforms words into images through subtle alterations of colour, scale and meaning that challenge our reading of the easily recognisable; MARC HUNDLEY produces prints that refer to pop culture and borrow the formats of advertising to subvert the typography that overwhelms public spaces and the mass media; ALISTAIR FROST makes installations and paintings that incorporate simple graphic representations of pencils, motorbikes, smoking jackets and cocktails; and FIONA BANNER creates large scale installations, hand-models language in neon and uses typography and densely set fields of lettering that describe the symbolic language of film.
FIONA BANNER (born 1966, Merseyside) was shortlisted for the Turner Prize in 2002 and in 2010 produced the Duveen Galleries Commission at Tate Britain. She has produced many artworks as books through The Vanity Press which she founded in 1997, including The Nam, The Bastard Word and All The World's Fighter Planes.
ALISTAIR FROST (born 1981, England) has had solo exhibitions at Christian Andersen, Copenhagen and Independent art fair, New York in 2012. He also participated in DOVBLE TROVBLE at CCA, Glasgow in 2012.
MARC HUNDLEY (born 1971, Toronto, Canada) has had solo exhibitions at Team Gallery, New York; The Waves, The Body Alone in 2013 and Joan Baez is Alivein 2011 and a two person show, Matt Connors/Marc Hundley, at Herald Street in 2012.
KAY ROSEN (born 1949, Corpus Christi, USA) has exhibited widely since the seventies. Recent solo exhibitions include, Kay Rosen: Windows, at Contemporary Art Gallery, Vancouver in 2013, Here are the People and There is the Steeple, Christchurch Art Gallery, New Zeland and Construction Zone, Aspen Art Museum both 2012.
NEIL RUMMING (born 1973, Frome, Somerset) had a solo exhibition Hausfrau at Cole, London in 2013 and was included in Seriously Connected Old Greyhair, Christopher Crescent at HD Projects, New York in 2012.
STEPHEN WILLATS (born 1943, London) is a pioneer of Conceptual Art; he has exhibited extensively internationally since the sixties and produced the magazineControl. Solo exhibitions in the UK include Surfing with the Attractor, 2012 andChanging Everything in 1998, both at the South London Gallery; From My Mind to Your Mind at Milton Keynes Gallery in 2007, and Concerning our Present Way of Living at Whitechapel Art Gallery, London in 1979.
www.katemacgarry.com