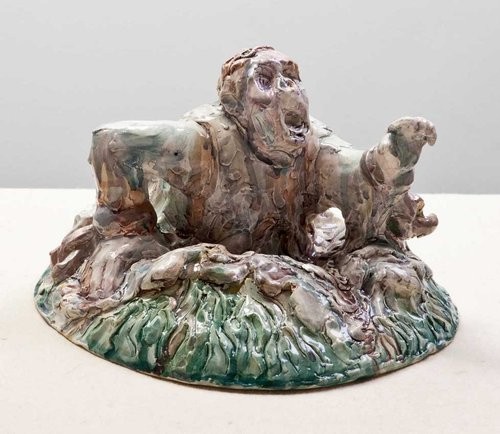 It is like something out of a B horror movie: Johnny finds a gooey substance in a vacant lot. He mentions this to someone, who is found dead on the next scene. Then either Brenda, Hotty, Morna - whoever - panics and says, "Let's get out of here!" But the telephone lines have been cut, and the cars have leaked gas all night long. Then we hear some painful notes played on a harp, accompanied by verses recited in a querulous voice.

But this poet, if he came from there, was just passing through, and this backdrop does not define him. He is reminiscent of TV on a slow afternoon, the items on the shelves of a cheap knickknack shop, an old varnished painting, or a high-school poetry booklet. He leaves behind him a viscous trace that covers various references, but doesn't live in any of them in greater depth.

However, the impossibility of tracing his origin does not prevent him from speaking coherently about his own condition. What comes out of him arises from his belonging to this material: he sings to the heights while being nourished by the mud at his feet, in a kind of realism that would seem excessively resigned for the typical romantic.

The other one as well - the one scratching himself while reclining on a slope of fingerpints - leaves clues about the paths he has traveled by: an impromptu philosophy class, an opening joke, and a photo of the wrong girlfriend. He is followed by the begging child, covered by layers of newspaper cartoons, but exuding sculptural material, who seems to arrive here by way of a shouted comment coming around the corner, from the 1940s. A bizarre crossbreed of icon, object and stereotype. At first, I feel sorry for him. Yet soon I cannot contain my laughter, so I blame myself. And he wins. The authoritarian generality arrives, whose power lies in its very exhibition of itself. The allegory of impotence follows, ironically referencing one of our most ambiguous cultural moments... And the procession continues.

The pieces, for the most part, pose seductively. We know how charming can be a piece which, somewhat swaying, with heavy makeup and a fake smile, wishes to be a bitchin' sculpture... Maybe a purchaser pays the stipulated price only in recognition of its effort in selling itself. Or because he understands, looking into the piece's eyes, that it is well aware of its own condition.

He pays because it is the only way to prove his complicity with the poor thing. This is why it does not reach the level of irony. Irony presupposes complicity from the outset.

The first, nearly automatic association that comes to mind is Daumier's sculptures, charged with a realism fed precisely from the exaggeration, from the weight. The further they are from verisimilitude, the more revealing they are of the ignominious personalities and of the ideology of the power roles played by the various social actors. I thought about caricatures, which twist the characters' features in order to bring hard-to-see things to light. Yet despite the likely kinship, these pieces take up a different stance: they do not denounce fixed social types. If they intend to reveal anything, it can only be the transitory and ungraspable condition of the real to which they are subjected.

The social criticism structured on the viewpoint of an observer who astutely gazes upon the world's vices and vicissitudes gives way to a subject who sees social satire itself as one of the various materials that coexist in the pieces. He can only look at the world from within, with the complicity provided by a certain cynicism, of a sincere and somewhat ingenuous sort.

This point of view recalls the interplay we see in Daumier's We Want Barabbas, which refers to the choice presented to the public by Pilate. We watch the condemnation of an innocent defendant there among the crowd, that accuses and abandons him in the name of a spectacle which is transitory and entertaining, although it subtracts any possibilities of real interaction with the world. The illusion of choice compels us to order the execution, of this process or of any other one. We become another member of the masses, which Daumier models pictorially like clay.

These pieces could have been modeled from that same clay. But their form also alludes to the reproduction Daumier's painting, from the book my considerations are based on. They treacherously assault the very references which raised them to the status of art. Exigente [Demander] already counts my Daumier as one more victim. Furthermore, he has on his lips the argument of both "Jesus" and "Barabbas." The hands seem to evince a contradiction, but his mouth expresses without conflict the synthesis which is his demand.

Here, the most important reference to current society does not arise through the quick identification of the types, characters and groups (even though the set presented seems very eloquent to me in regard to our historical avarice), but rather through our identification with them in their disorientation.

After all, here are all these freaks looking at us from the privileged position awarded to them by their sculptural base: above the floor, but a little below eye level. And moreover taking on a concreteness they lacked previously, when they occupied the transitory realm of media images, which serve as material for the stereotypes and feed them, and which seductively christen the world with reality.

They provide a thread that links the strangeness - caused by the people who live a life of avoidance - to the fear I got from the obscene knickknacks who lived at my grandmother's, who would make faces when the adults were not paying attention. They were mutants who lived reasonably satisfied on a little table until one day, something happened: the visitors were lingering too long or someone unintentionally - it doesn't matter - let one of them fall, resulting in a bunch of shards. And this upset them irremediably. And after passing through all the categories of that apartment of retirees - bookcase, television, calendar and newspaper, they caught up with me here. They make fun of my pretension of analysis, of my evident impossibility to circumscribe them in a cultural definition. And I can hardly imagine the faces they are going to make for the illustrious visitors when, after they are sold, they once again take up their places in living rooms.

For me, this is the true desire of these pieces that are dragged into a museologically arranged space: to reveal -despite themselves and others - that which is most transitory. To give form, through the marks left by fingers, to that cliché which has forever roamed about the depths of our ideological reasoning, making it a concrete icon, kept alive on the limits of the fetish.

Tiago Carneiro da Cunha studied at Goldsmiths College, London in 1998-9 for a Postgraduate Diploma in Fine Art and the following year as Associate Research Studentship in Fine Art.
www.katemacgarry.com