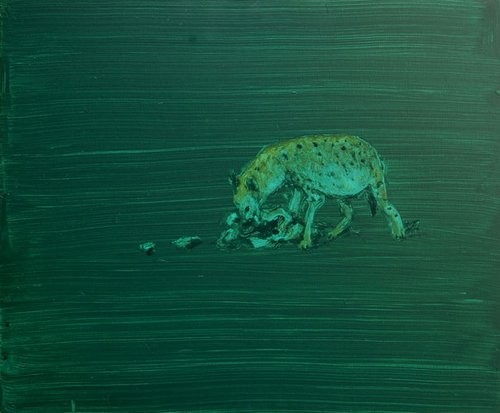 Kavi Gupta gallery is pleased to present the first solo exhibition in the United States of Dublin-based artist Ciaran Murphy.
Ciaran Murphy creates paintings that borrow their imagery from a myriad of sources spanning subject matter that can reach from a tropical landscape to an animal eating its prey. His choice of disparate and sparse singular vignettes alludes to the intrinsic and imperative connection of Murphy’s world of images as they relate and interact as a whole. Though quiet and poetic, his subject matter encompasses humor and violence, romance and utter mystery all at once.
Murphy’s paintings are predominantly modest in size and are marked by a subdued palette of neutral painterly and often gestured mark making. Some images are barely recognizable such as a painting of a cloud of passing smoke while others are as straight forward as a perched monkey showing off her blue eye makeup. The array of imagery does seem to eventually focus on a few recurring motifs as Murphy gravitates towards scenes of nature. Piles of twigs, uprooted trees, animals and lightning storms describe a few of these examples though this tendency does not reveal to the viewer a sign of a clear narrative, or a key to unlock a specific story. It leaves one to imagine Murphy’s paintings as a trail on an infinite journey of one artist to define for himself his own world and its surroundings.
Ciaran Murphy (b. 1978) lives and works in Dublin, Ireland. Murphy has had solo exhibitions at mother’s tankstation in Dublin, and has exhibited and been an artist in residence at the Irish Museum of Modern Art, Dublin. Selected group exhibitions include shows at Massimo Carasi in Milan, Rubicon Gallery, Dublin; Temple Bar Gallery, Dublin and the RHA Gallagher Gallery, Dublin.
www.kavigupta.com