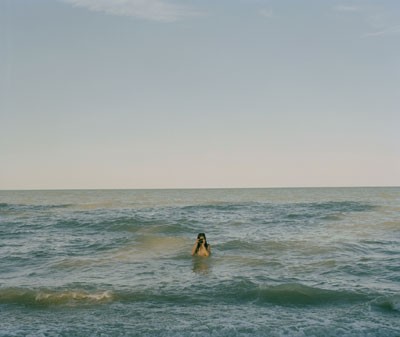 Kavi Gupta Gallery is pleased to present the first major solo exhibition of a new extensive body of photographs as well as the debut of a new video projection by Chicago-based artist Melanie Schiff. Her exhibition titled "Underwater Photographer” expands on her previous photographic images which encompass self portraiture, landscape, still-life, and performance.

Throughout Melanie Schiff’s work multiple themes and symbols recur such as her playful use of light, landscape, the body, pop culture and ideas of spirituality and meditation. The moments she addresses are quiet and waver on the edge of a constructed poetic narrative and an instant found by chance. Her investigations and use of natural light through windows and objects such as empty CD cases and light fixtures form prisms of color and phenomenon of light and shadow. One might point to magic or alchemy as a starting point of her work, though these moments of chance and mystery infiltrate the commonplace detritus of an event including scattered beer cans, bottles, books, records and personal effects revealing what could be seen as a spiritual happening through a series of mundane objects. Shattered mirrors sit on the floor underneath two beer bottles balancing in a formal experiment neck to neck and in another photo the sun slowly lowers into the opening of a whiskey bottle. These images subtly evoke a sexuality caught between nature, chemistry, formalism and once again void of the action which caused this poetic intersection.

The photograph which takes the title of the exhibition pictures a woman, presumably Schiff, standing in the center of a large body of water pointing her camera at the viewer. Her face is obscured by the camera, and it is apparent that this woman is the persona of the artist who created the photographs. The eye of the woman photographer is extremely present in Schiff's new body of work particularly in the images of the artist herself participating in a document of a performance, placing her into the ongoing history of women artists and performance. Two photographs depict the artist spitting a large spray of water directly at the viewer. Her face again is obscured, and a cloud of water penetrated by the sun creates a rainbow, and a beautiful complex pattern which conflicts with the aggressive action. In another photograph titled “Neil Young, Neil Young”, Schiff stands in a wooded forest and holds the first solo album by the beloved singer-songwriter over her face. A painted portrait of the musician on the album, for a moment becomes Schiff's face, and the landscape drawn on the album melds with the artists' surroundings.

The most meditative and hypnotic work in the show is Schiff's new film titled "Perfect Square". The video is filmed from deep below the water, and the point of view is directed upwards to the surface where the artist is attempting to swim the shape of a perfect square. Here Schiff juxtaposes the unpredictable temperament of nature with the regimented and futile endeavor of creating geometry within the fluid water. Through her continued use of haunting light and the absence of human interaction, Schiff’s images project a common tranquil and melancholy mood that filter through various subject matter, places, and events.

Melanie Schiff (b. 1977, Illinois) lives and works in Chicago. Schiff was included in Autonomy curated by Sterling Ruby at Foxy Production, NY; Still Life curated by Brian Sholis at Placemaker Gallery, Miami; as well as exhibitions at Modern Culture, NY; Gallery 400 at the University of Illinois at Chicago, The Chicago Cultural Center and Thomas McCormick Gallery, Chicago.