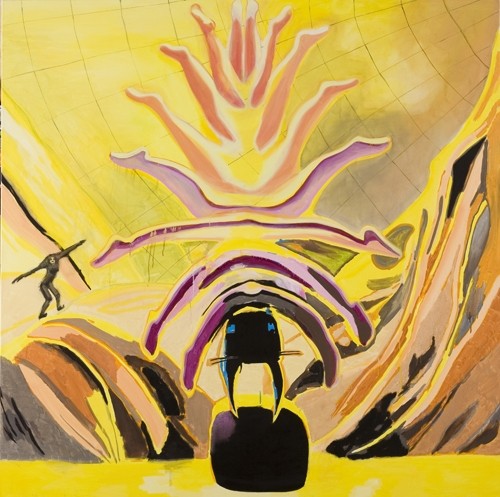 Is conceptualism actually distinct from expressionism? The process by which these categorizations come to be represented in art history is often so haphazard, similar to the clumsy means by which one decides what they feel from what they think. As a disfigured and fragmentary chapbook of contemporary style, Style & Desire is premised by the question of how reproduction and representation are related.

As true today as it was in decades past, the use of a well embedded historical gesture or form (e.g. the drip, the Pieta, the monochrome square) is capable of releasing a potent splash of signification, stringing the work backward and forward in time. Over centuries art historians from Baumgarten to Warburg to Krauss have compiled a behemoth manual of proliferated styles and gestural filiation - a machine that tirelessly conditions our perception of art. However, for as much as we may be able to create criteria, categorize, and then debate the taxonomy, this is discursive knowledge that tells us more about how we look than what we see. Instead, it is the novel aspect of any form, the work's anomalous, discontinuous qualities that defies any deep aesthetic genealogy and gives birth to contemporary meaning. Style & Desire is an exhibition of these discontinuities.

James Krone (b. 1975 in Chicago) lives and works in Berlin. Recent solo exhibitions include Trickle Down Ergonomics (2010) at Kavi Gupta Gallery in Chicago, The Wilderness Is The Witch's Leash (2010) at Country Club Projects in Los Angeles, and In Lieu Of A Science Of Memory (2008) at Circus Gallery in Los Angeles. Recent group and two person exhibitions include Vivere Country Group Show (2010) at Grimmuseum in Berlin, James Krone and Jason Loebs (2009) at Kavi Gupta Gallery in Berlin, and Ayran and Yoga: The First Berlin Kreuzberg Biennial (2010)(curated by Tjorg Douglas Beer), Berlin. Krone's exhibitions have been reviewed in ArtForum, ArtUS, Monopol Magazin, and various other regional periodicals and newspapers.

Katrin Plavçak (b. 1970 in Gütersloh, Germany) lives and works in Berlin. Plavçak's recent museum and kunsthalle exhibitions include Captain Pamphile (2011) Deichtorhallen/Sammlung Falckenberg in Hamburg, Take Me To Your Leader (2010) at the National Museum for Art, Architecture, and Design in Oslo, and Triennale Linz (2010) at OK Zentrum in Linz, Austria, Schere-Stein-Papier (2009) at Kunsthaus Graz, and Human Or Other (2009) at Secession in Vienna. Recent gallery exhibitions include Herz aus Jean (2011) at Galerie Mezzanin in Vienna and Emma Peel in der RNA-Welt (2010) at Dispari & Dispari Projects in Reggio nell'Emilia, Italy.

Scott Reeder (b. 1970 in Okemos, Michigan) lives and works Chicago. As an artist, curator, and filmmaker, Reeder has exhibited extensively throughout Europe and America. Recently, Reeder has had solo exhibitions at Annarumma404 in Naples (2011), Luce Gallery in Turin (2010), and at Daniel Reich Gallery in NYC (2009). Other notable group exhibitions include Constellations (2009) at the Museum Of Contemporary Art in Chicago, Abstract America (2010) at the Saatchi Gallery in London, and Rob Pruitt's Flea Market (2009) at Tate Modern in London. Reeder has also organized/curated a number of exhibitions including the Drunk Vs. Stoned (2004-5) exhibitions at Gavin Brown's Enterprise in NYC and as part of Milwaukee International, The Dark Fair (2007-8) at The Swiss Institute in NYC and the Kölnischen Kunstverein in Cologne.

Henning Strassburger (b. 1983 in Meissen, Germany) lives and works in Berlin and Frankfurt. Recent solo exhibitions include Softidrink (2011) at Kunstverein Heppenheim, Good Old Figuration (2010) at Kunstsammlung Deutsche Bundesbank in Frankfurt a.M., and Happy P. (2009) at Galerie fiebach, minninger in Cologne. He was recently included in Informal Relations (2010) at the Indianapolis Museum Of Contemporary Art. Strassburger was a member of the German painting group, VANDEL (2008-2011). He completed Meister Schule at the Kunstakademie Düsseldorf in 2009.
www.kavigupta.com