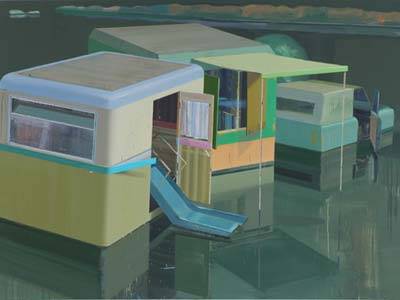 Ulf Puder (born in Leipzig, 1958) belongs to the first tier of famous graduates from the Leipziger Hochschule für Grafik und Buchkunst (Academy of Visual Arts) and along with his peer, Neo Rauch, he was on the forefront of painters creating a new vocabulary that combined the neo-realism prevalent in the former Eastern Germany with a surrealistic bent. This was defined in a language endowed with both a strong narrative quality, inherent in the academy’s strong tradition of book illustration, and a mastery of the brush. Ulf Puder creates unique imaginary worlds of architecture and inhabited landscapes, described in a characteristic color palette of dim, almost smoky tones—very reminiscent of the Bauhaus color scheme. Unlike Rauch’s work—which is highly descriptive and crammed with motifs—Ulf Puder’s paintings are more abstract, desolate and haunting, leaving the viewer with a particular feeling of enigma, equivalent to that engendered upon visiting a ghost town.

In the work Zwischenhalt (Stopover, 2006) what appear to be derailed locomotive wagons are turned into housing modules, aligned in a zig-zag fashion as though one has rammed into the next; the rails run not only beneath these bizarre lodgings, but also through them. In Niveauwechsel (2006) small sheds become water bungalows, a hamlet of connected rafts floating on a mare incognita. Anonymous objects appear in strange places and only very seldom does a figure lurk in the shade of this artificial and wondrous world; here a sketchily rendered woman holds a staff in her hand—it is ambiguous as to whether she is sweeping out her one-room cabin, beating a carpet or is, perhaps, engaged in some further unrecognizable behavior.

In Camping (2005) an isolated village seems to have been constructed out of caravans, painted in bright colors and abandoned on a barren streak of wet beach. Although all the doors and windows are open, the lack of human activity intensifies the feeling of isolation. A turquoise pool slide extends from one door, while an odd car without wheels sits nearby on the sand’s wet and reflective surface: one cannot begin to imagine what activities might take place in this peculiar scenario. Indeed, all of Puder’s work strikes the contrast of living in crammed, close quarters yet being simultaneously cut-off from interpersonal warmth and communication. It is an eerie, empty world, dominated by human constructions yet devoid of human connection, leaving the viewer to feel intrigued yet apprehensive.

Ulf Puder was born in Leipzig, 1958 where he currently lives and works. Puder has had recent solo exhibitions at Städtische Galerie Wolfsburg, Dogenhaus Galerie, Leipzig and Artcore Gallery, Toronto. He has also been included in group exhibitions including Archipeinture at Le Plateau, Paris and at the Camden Art Centre, London; The Painter of Modern Life, Museum de Paviljoens, Almere, NL; Kunsthaus Dresden; Museo Municipal de Malaga; and New German Painting at the Prague Biennale 2.