Less is more - more could be Less 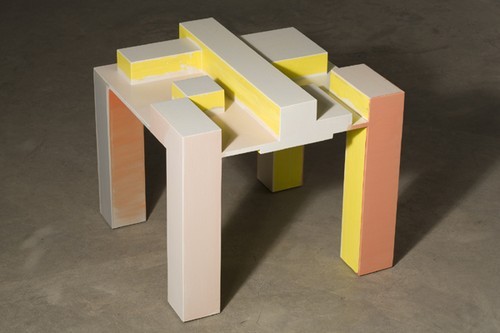 “With the brush, the artist constructs a new sign. This sign is not a form of knowledge of something already existing, it is already sign of a new world, which is ongoing in construction and which exists through the people.“ (El Lissitzky, 1923)
What Russian Constructivist El Lissitzky had in mind in 1923 was a reconstruction of painting which lead to architecture. In his utopian desire for a new world, all arts would dissolve into architecture, into a permanent and dynamic reconstruction of the world. Lissitzky’s utopian hopes were not fulfilled. Not only was the world not freed into its permanent reconstruction, but also the genres of art were separated from each other again and relegated to the separate fields of art’s academic discipline.
„Less is more“, German architect Mies van de Rohe’s now idiomatic formulation grasps the utilitarian architectural modernity which replaced Lissitzky’s revolutionary utopianism with the straight functionalism which was not so much fitted for man but in which man supposedly had to fight.
Lissitzky’s architectural utopianism as well as Van de Rohe’s consequential functionalism have both subsisted in numerous artistic practices, which distributed architectural methods and media into other fields of visual art, just as those have since been distributed into architecture. The twelve artists, whose works are on show here, do work in largely different modes, but are all united in their working towards architectural representations and constructions.
For those artists, who, like Thomas Scheibitz and Nicole Wermers, whose works are not figurative but rather figure out a structure within themselves, architectural structures are a common theme. Wermers’ collages enfold space in itself and irritate the viewer’s perception. Her ashtrays reconstruct objects of use value as miniature architectures, while Thomas Scheibitz’s works on paper seem to be destined to become technical drawings. However, they hint towards non-figurative translations of stage-like architectural models. The difference between functional architecture and its staged and impermanent recollection seems to vanish.
Those moments in which differences vanish, or are no longer determinable, play a major part in the photographic works of Beate Gütschow. Her cityscapes at a first glance seem uncannily familiar, and it is only in approaching their surfaces more closely, that the viewer realizes that the uncanny feeling they provoke does not only result from their war-zone like aesthetics but also in the fact that they are digitally constructed out of numerous geographically, unrelated architectural fragments. This tendency towards construction is omnipresent not only in Gütschow’s work, but also in that of Stephen Craig, Thomas Schütte and Herrmann Pitz. They all work on architectural models, but use largely different concepts and materials to realize the transformation of this technical into an artistic genre.
Schütte aims to present his portfolio of architectural models as a collection of architectural propositions, some of which, like the large structure designed for the Hafencity in Hamburg, will be translated into actual buildings. In this, he may be closest to Lissitzky’s idea, because he relates the artistic models back to the everyday which he intrudes. Pitz’s and Craig’s architectural models remain in the scale of representative prototypes. Craig’s colourful constructions mix classical works of temporary architecture, pavilions, with elements of mass consumption’s monstrous settings, like swing-doors. Pitz’s reconstruction of New York buildings attaches them parasite-like to a chipboard. Here they reside, being constructed out of a wrecked map of Manhattan.
In the face of those attempts to prefigure architecture in art, Manfred Pernice’s „H 2000“ seems less to be a model but more a realised architectural space. Unlike Lissitzky’s utopian openings of the third dimensional space, Pernice seems much more to infold than to enfold. His man-high object seems like an inhabitable pedestal, all numbered and identified through the copy on its side.
Norbert Schwontkowski and Yesim Akdeniz Graf both collapse the architectural approaches, which Lissitzky was to lead out of their pictorial surface back into the realm of painting. Graf creates views of mansions and sites, whose colours thoroughly distract their own figuration. Her reds, blues and greens seem primary and let any attempt for a realistic perception fail, while Norbert Schwontkowski’s figures seem to be build up out of the indefinite coloured spaces in which they are placed. His “Cloaked Monument“ stands decidedly lost in an undecided space but still is a solitary structure defining architectural perception in painterly terms.
Architecture may seem like a reduction of visual artistic practices in Lissitzky’ s terms and led to monuments to an idealized mankind in Van de Rohe’s case, but as an articulated reference in contemporary artistic practices, it opens up an unlimited space of new construction. Leading not to the new world but to many
www.kerlin.ie